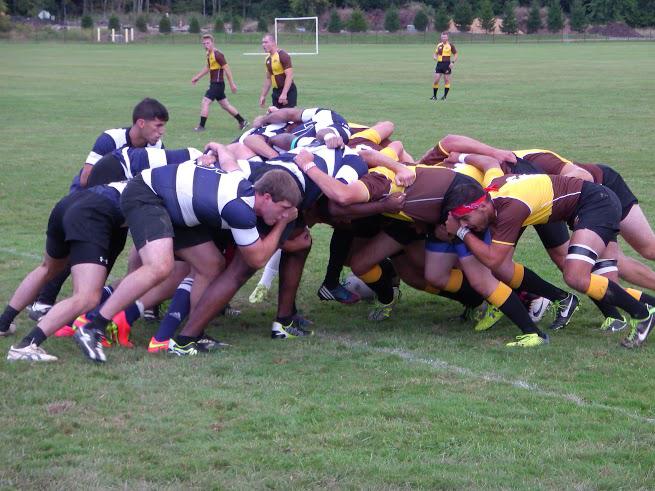 The forwards of the men’s club rugby team ruck over the ball in a game last Saturday against Baldwin Wallace University. The team fell 28–11 in the match.

Last Saturday, the men’s rugby team, the Gruffs, opened its fall season with a 28–11 loss against Baldwin Wallace University. Despite the defeat, the team is still proud of its performance and knows what to work on for future games.

“The game this past Saturday was great,” said sophomore scrum half Joey Velez. “We all fought hard throughout the entire match, which is more than I could have asked for from my team.”

With limited practice time, the Gruffs faced an uphill battle this week, and that the game was as close as it was,was a small victory for the team.

“The team played well and we had only had a week of actual practice,” said senior forward Phillip Hsu. “Baldwin Wallace was also the best team in the league last year by a decent margin, and they went undefeated.

One of the challenges of playing on a club sport team is continuing to improve while dealing with the turnover that happens every year. This year’s Gruffs team is no exception, and it has a number of players who are new to the sport at Oberlin.

“It was the first game of the season, so of course there are areas we can work on as a team, but they come with experience and practice,” said Velez. “We also have a lot of new guys on the team, so it was their first time ever being in a match, and I must say, they all did substantially well.”

Last season, Velez was the only first-year on the Gruffs, leaving the team with a noticable lack of playersƒ. This year, however, a number of new players have joined the team and both Hsu and Velez agree that the additions are welcome and will help in the long-run.

“The team just needs more time to get a handle on the fundamentals of the game and a better sense of how to operate as a unit,” Hsu said. “We have a large number of new additions from all years. Probably around half of our roster is new this year, which has added a lot of depth to the team.”

With the first game behind them and a young, energetic team, the Gruffs are preparing themselves for future success and setting high goals for the rest of the season.

“Ideally I’d like to win the rest of our games,” said Hsu. “Our league has a decent amount of tough competition after the restructuring last year, but I believe it’s a realistic goal if we continue to improve.”

Despite that challenging schedule, Velez believes that the team’s strong chemistry will help lead to success.

“My goal for this season is to create very strong team unity,” said Velez. “We’re more than just a team. We are brothers who are willing to fight for one another, whether that means on the field or with school work. No matter the occasion, I want everyone on the team to know they have an abundance of helping hands at their disposal.”

The Gruffs’ season continues this weekend as they travel to Ohio Wesleyan University this Saturday to play their second match of the season.