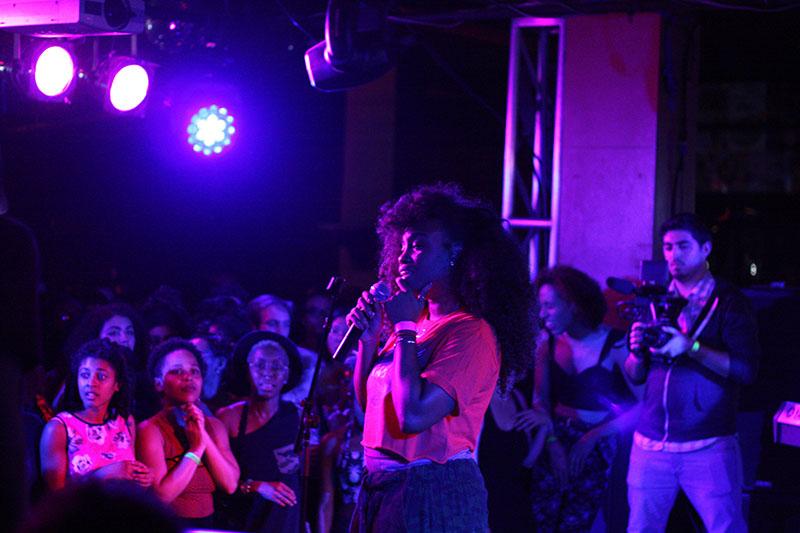 SZA’s laid-back vibe and confident stage presence satisfied concert-goers. Her show sold out well before she took the ’Sco stage last Friday night to perform hits from her Liam McLean Staff Writer Bryan Eubanks, despite what some lis- teners may assume, does not aim to trans- gress. His intention is not to push boundar- ies. Instead, he describes his development as an electronic artist as an organic evolu- tion from his original work with acoustic instruments — primarily the soprano sax- ophone — to his current style, an elusive concoction of trance-like electronics, inte- grated acoustic sounds and ambient noise. Beginning at 8 p.m., Fairchild Chapel’s resonant dome became an echo chamber for a zealous hubbub of around 30 stu- dents. Two tables supported an eclectic ar- ray of electronic instruments. The front ta- ble was reserved for Eubanks and boasted an open-feedback synthesizer, a computer for samples and a transducer, a device that channels frequency through a metal plate to produce sound. The rear table was set up for William Johnson, a double-degree sophomore pursuing majors in Studio Art and TIMARA, who opened the eve- ning with a performance using a modular synthesizer. Johnson began with an improvisational performance involving synthesized drones and wails. The more unsettling elements induced visible wincing and ear-plugging among the crowd. His work seemed to capitalize more on sonic “shock value” than anything; the music lacked build, and the hellish din that exploded in the middle of the piece was gratuitous. The perfor- mance’s saving grace was a single descend- ing riff, the only melodic portion of the per- formance — and a surprisingly infectious one at that — which added a sense of cohe- sion to the chaos. Following a brief intermission in the whiplashed aftermath of Johnson’s perfor- mance, Eubanks took the stage, command- ed the attention of the audibly excited crowd with an unassuming, “Hey,” and pro- ceeded to fill the room with his uniquely organic sound. He performed his recent composition “Object,” a solo work that the Berlin-based artist developed on a February visit to the Elektronmusikstudion in Stockholm. Ac- cording to Eubanks, the piece evolved from a number of fragments he recorded during this visit. “Object,” like most of his works, is continually explored and rediscovered through performance and improvisation, and has yet to be finalized. The artist, by his own admission, is also apt to explore sonic extremes, but his ex- ploration, particularly in Monday’s perfor- mance of “Object,” was sparse, deliberate and meaningful. Rather than bombarding the resonant room with an urgent cacophony, Eubanks let his music live and breathe in the space. The first sound was a sustained tone which he channeled through a small microphone. The tone’s emergence was so unobtrusive that it was difficult to pinpoint the exact moment of its materialization. Eubanks joined this raw undercurrent with the clap of two wooden sticks, a percussive inter- jection that recurred throughout the piece and served as the only deliberate acoustic sound that occupied the space during the improvised performance. The organic na- ture of “Object” made Eubanks’s simulated soundscape receptive to outside noises. The clicking of a pen, the rustling of a page, a passing car horn and a distant coughing fit seamlessly integrated into the chapel’s sonic centerpiece. Grounded by the tone that opened the piece, the composition evolved over the course of the performance into a cohe- sive collective of sounds: a noisy, jarring sample that became a recurring motif, an unsettling ringing from the transducer and the occasional murmur of white noise. As the music progressed, its sounds became decidedly more organized with a better- defined rhythmic pulse. The highlight of the concert was the deft interplay between Eubanks’ acoustic percussion of the clap- ping sticks, a sample of rhythmic beeps and a subdued bassline that merged to achieve an unexpected groove. Eubanks takes “shoegazing” to a whole new level; he remained fully fixated on his feet for the duration of the concert. While the resulting emotional disengagement might seem to be a limitation of a live per- formance, Eubanks, surprisingly, could not have presented a more charismatic stage presence. His lack of onstage flair seems intentional: the sound, not the artist, was the predominant force at Monday’s per- formance. While it may not appeal to the majority of concertgoers, Eubanks’ music is a sage and salient voice to the niche he’s created for himself, regardless of how unas- suming his persona may be. latest EP, Z.

A $15 ticket can be tough to justify on a college budget, but at 10 p.m. last Friday, 20 minutes before the ’Sco doors were set to open, tickets to see the altR&B and neo-jazz singer SZA had already sold out. Perhaps the young New Jersey native’s association with independent record label Top Dawg Entertainment and her friendship with platinum-selling labelmate Kendrick Lamar — whose 2011 ’Sco performance cost a mere $10 — justified the price of admission to the nearly 500 attendees. But she also made good on the industry hype; delivering an intimate, relaxed set of songs that easily surpassed her studio recordings in emotional resonance and vivacity.

The mood was unquestionably positive as the opening act, Van ’Go — Gynarva Van Monroe, OC ’11 — took the stage amid encouraging chants. A seasoned opener at this point in his career, ’Go handled the mic prior to Lamar in 2011 and before Mos Def ’s show in 2013. Dressed in black from his head to his Air Jordan Gamma 11s, he assumed the confident appearance of a headliner, with the stage presence to back it up. The crowd responded to ’Go’s rhymes with more vigor than they do for acts twice his stature, and as the hometown hero topped off his set with an encore, it seemed as though the audience was there for him alone.

Between sets, a semicircular mass began to coalesce around the lip of the stage. Though at this point a warm-up was hardly needed, back-toback Beyoncé anthems on the house PA had the crowd swaying. “***Flawless” reverberated through the monitors: “I took some time to live my life,” the lyrics blared, “but don’t think I’m just [ Jay Z’s] little wife.” The song is oddly representative of the challenge inherent to SZA — that is, garnering attention independent of her all-male labelmates and losing the title of TDE’s “first lady.” However, the Beyoncé–Jay connection is an entrepreneurial as well as ideological one; When the intermission music paused, a ’Sco representative asked the audience for consent to be filmed by Jay Z’s personal film crew for a collaborative project. Needless to say, consent was granted.

With energy at a peak, SZA took to the stage and wasted no time setting a completely new vibe for the remainder of the night. She opened with “Ur”, a laid-back Mac Miller-produced track, with a sound inspired by the rapper’s well-documented codeine days. The song became infectious; a thunderous bass line synced with the audience’s collective frequency as they slowly grooved in time. SZA’s vocals sounded as if they were floating in the stratosphere, imbuing the track with grit rarely identifiable on her singleletter releases.

As the night went on, songs like “Sweet November,” from this year’s EP Z, warmed the room. SZA’s live performance of the tune was clear and lyrical, in contrast with the clouded filtration present on the studio version. Her band’s chillwave pulse created a riptide, dragging the audience’s hips collectively in and out between the backbeats. When what had turned into a laid-back Friday night came to its fluid end, the crowd rallied for an encore. Unfortunately, SZA would not oblige, allowing the crowd to reflect on her complete performance instead of succumbing to requests for an unneeded continuation.

Despite the price, the audience seemed satisfied after an hour of SZA’s positivity. Her fame notwithstanding, SZA is naturally relatable — the type of artist you can’t help but root for. She appeared genuinely happy to spend her Friday night with a room of college students, despite having to travel nearly 900 miles for a Minneapolis performance the following night. Her spirit remained fresh and relatable to the audience, from her causal attire to her playful recognition of the crowd’s appreciation. Hers is an admirable humility that’s rare among more popular artists — even Lamar, whose 2011 Oberlin stopover lasted a mere 35 minutes before he happily disappeared.

Though still burbling below a crop of smooth crooners like Frank Ocean and The Weeknd who sing, as it’s affectionately called, “PBR&B,” SZA’s raw vocal talent and persona have to be experienced live to be believed; the bold and thought-provoking lyrical content on her records alone just can’t compare. Of course, time will only tell what the future holds for SZA, but as she begins work on her upcoming EP A, it’s a safe bet that her reputation will only continue to grow.