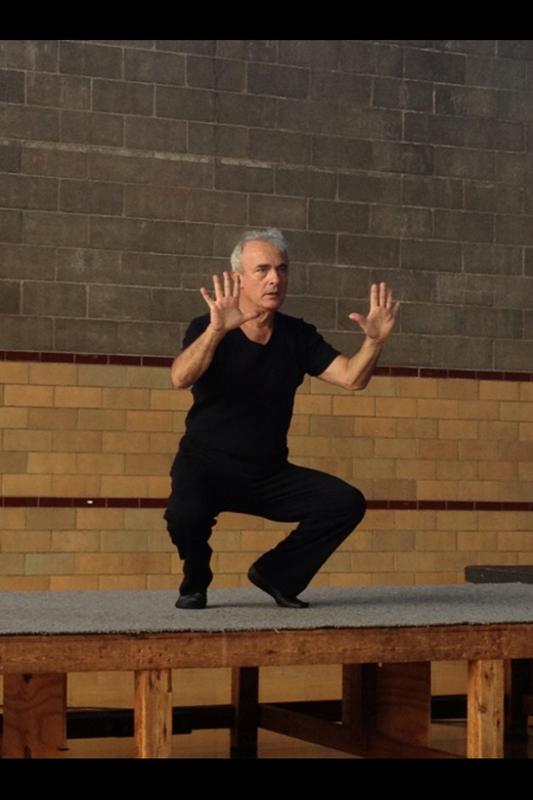 BiLi the Mime performs the ubiquitous “wall trick” for a small group of students. As a guest of the Theater department, BiLi followed his Friday performance with a master class on the fundamentals of miming the following day.

For the first time in Oberlin’s history, students are introducing the art of mime as a branch of the Theater department. Last Friday, Sept. 19, the artist BiLi the Mime lectured and performed at Hales Gymnasium to promote the legitimization of mime as an art form. BiLi followed up Friday’s festivities with a master class on Saturday morning about the fundamentals of miming.

College sophomore Amanda Siskind, co-chair of the Oberlin Student Theater Association and treasurer of OCircus, was the primary organizer of the two events. According to Siskind, BiLi, whose son plays soccer for the College, emailed the school in the hopes of performing for the community. OSTA and OCircus coordinated both days of the event.

“Mime is [about] creating an illusion,” BiLi said at the start of Saturday’s lecture, surveying the crowd of about 20 that had assembled in rows of folding chairs. Late afternoon light slanted through the windows that overlooked BiLi’s perch on the stage; the crowd was hushed and rapt. Even the group of children in the audience fell silent as BiLi commanded the crowd’s attention.

After a brief introduction, BiLi demonstrated some familiar mime techniques: the classic mime walk, the tugging of a rope and the ubiquitous “wall trick.” Throughout these demonstrations, he offered insights on some of the central principles of miming.

“Mimes have to have a great memory,” said BiLi. To illustrate the maxim, he pantomimed ordering a drink at a bar and emphasized that his orientation at the bar in the scene must remain consistent to sustain the illusion. BiLi showed how the movement of his eyes indicates the height of an invisible ball tossed into the air, demonstrating how the mime’s facial expressions convey the scene’s subtleties.

BiLi thoroughly engaged the crowd, even insisting at one point that everybody stand up and mime pouring and sipping a drink. Later, he invited volunteers to the front of the room to practice the “wall trick.” Toward the end of the lecture he performed a routine with several masks intended to enhance characterizations. Audience reactions ranged from laughter to, in the case of one small child, tears.

BiLi is particularly devoted to combating what he deems to be harmful stereotypes associated with the art form. He lambasted the popular image of the street mime, as well as the idea of the striped T-shirt as a standard mime uniform, which he considers an absurdity that “should be removed from the minds of people and thrown in the garbage.” These clichés trivialize mime and its artistic merits — a trend BiLi seeks to reverse.

The next morning at 11 a.m., 20 students filtered into a dance studio in South Hall for an introduction to some basic mime techniques. The attending students, many artists in their own right, expressed their hopes that this exposure would enrich their abilities in their respective art forms. “I do improv comedy,” said College second-year Harley Foos. “A big part of improv is pantomime. It gives the scene another dimension.”

Other attendees had less defined goals in mind, though they were no less enthusiastic about the chance to dabble in a new art form. “I’m here because it’s basically a free resource to learn from somebody who’s studied the craft for a long time,” said College firstyear Eliana Meyerowitz. Over the course of an hour and 15 minutes, BiLi broke down the fundamental techniques he demonstrated in his lecture and challenged participants to engage with their bodies. He opened the class with a warmup, during which he requested that students isolate different parts of their body to introduce the intense focus and precision that mime demands from its practitioners.

Precision is one of the cardinal concepts that BiLi seeks to impart in his teaching. “I want to show my students that in mime the techniques are not necessarily spontaneous; that you have to learn them and practice them,” he said. “When I show a technique like the walk, there is a lot of technicality that goes into it, because you cannot improvise that, you have to follow a sequence of movements.” Beyond technical principles, BiLi also aims to promote the importance of stage presence and narrative creativity.

This creativity was on full display during BiLi’s performance on Friday, which followed his lecture.

The mime performed his signature skit, “The Window Washer,” the tale of a sprightly worker who peers through the windows he washes for a glimpse at the private lives of those within. The skit ends with a suggestive encounter with an undressing woman. At the heart of both the skit and mime as an art form, BiLi asserted, is poetry. “In mime, there is a notion of sensitivity. You have to be a little bit poetic,” he said. “This character of the window washer, there is a little poetry behind it, because he’s a sensitive guy.”

Spry and animated on stage, BiLi evoked an earnest passion for his art that he later expressed in an interview, reclining meditatively on a couch in South Hall following Sunday’s master class. The French-born artist began his formal training in 1976 under the tutelage of Stella Bensadon, a disciple of influential mime artist Marcel Marceau. He elaborated on his long-held passion for the form. “As an art form, [mime] is extremely powerful because, in fact, you can tell stories about anything, stories that are very abstract, something very visual, something very real, something very unreal and surreal.” He also emphasized the crucial participatory role that spectators play in interpreting the mime’s movements. “The job of the mime is to create an illusion, so for that illusion to take place you have to have some brain power … behind it.”

Siskind expressed overall satisfaction at the community response to the events. Though she regretted the small turnout, she noted those who did attend “were very invested in it, and that was really nice to see.”