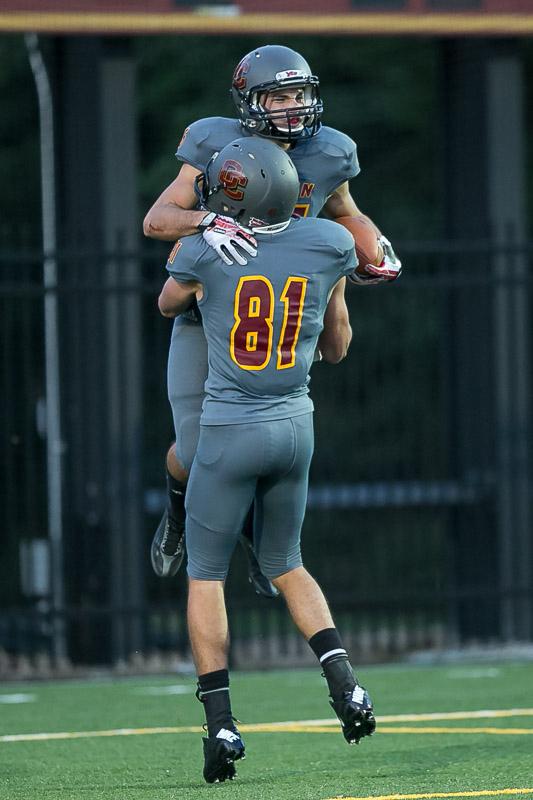 Sophomore Justin Cruz celebrates his 70-yard touchdown in a 63–10 loss to The College of Wooster Fighting Scots last Saturday. Cruz leads the Yeomen with 13 catches for 258 yards and four touchdowns this season.

As part of a historic homecoming weekend, the football team took on The College of Wooster Fighting Scots in their first game under the lights at the new Austin E. Knowlton Athletics Complex.

No empty bleacher seats were visible on the home side of the new stadium, as the crowded and enthusiastic mass of alumni, faculty and students totaled over 2,000 people.

Despite the overwhelming support from the home crowd, the visiting Fighting Scots soundly defeated the Yeomen 63–10.

The Yeomen started out strong on their opening possession, driving 65 yards on 15 plays while taking 8:04 off the clock. The drive stalled on the Fighting Scots’ seven-yard line, however, and the team was forced to settle for a 24-yard field goal by senior Erickson Andrews.

The Yeomen’s lead didn’t last long, as the Scots drove 75 yards down the field, ending their initial possession with a 12-yard touchdown run.

However, the Scots gave up their lead quickly when junior quarterback Lucas Poggiali connected with sophomore wide receiver Justin Cruz on a 70-yard touchdown on the first play of the ensuing drive, giving the Yeomen their first and only touchdown of the game. Cruz finished the game with a team-high six catches for 137 yards.

Following Cruz’s long touchdown catch, the Fighting Scots dominated the Yeomen defense, scoring 35 unanswered points in the first half to take a 42–10 halftime lead. They added three more touchdowns in the second half to give them a 63–10 victory. The Scots finished the game with 574 yards of total offense, dwarfing the Yeomen’s 324.

The lopsided final score simply came down to a lack of execution by the Yeomen.

“We didn’t necessarily follow the game plan as best as we could have,” said senior linebacker Max Schenk, who netted a team-high 13 tackles.

Schenk added that he didn’t think the scoreboard reflected the Yeomen’s overall play.

“There were critical mistakes at certain times — it only takes one mistake for big plays to happen that turn the game,” he said.

Head Coach Jay Anderson said that the game highlighted things the team needs to work on, including tackling, converting third downs and flipping the field.

However, both Yeomen coaches and players could still see the positive outcomes of Saturday’s game.

“The feeling after that game should get everyone motivated to get better [and] play smarter,” said Schenk. “It should be a big motivator for changing how people practice or play and maybe finding a new gear that they didn’t have before.”

Anderson also said that the game was a good experience for many of the team’s younger players.

“We’re a young football team, and a lot of young guys were getting some playing time,” he said. “So for a lot of our younger players, that was their first collegiate start on Saturday, and the first time they received extended playing time at this level.”

Though the final score was a striking disappointment and post-game created a lively atmosphere which Schenk said he’d only seen happen once or twice before at Oberlin.for the Yeomen and their fans, the crowd

“The support was awesome, the amount of people was great, it was a really different feeling,” he said. “I hope that’s something that continues despite our loss.”

The Yeomen have already moved on from the tough loss and have begun preparing for Saturday’s home game against the Wittenberg University Tigers.

The last time the two teams met, the Tigers came away with a 59–0 victory, and Coach Anderson said the team is looking forward to Saturday’s challenge.