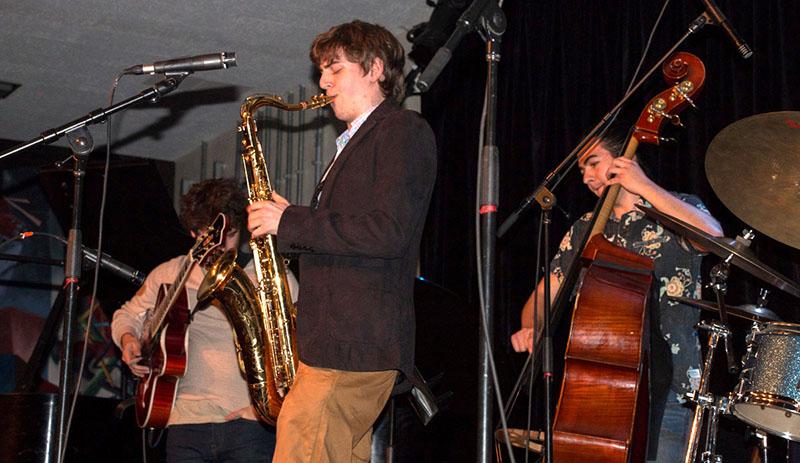 Late jazz legend John Coltrane would have been proud Tuesday evening when a collective of Jazz majors assembled at the Cat in the Cream to pay tribute to the saxophonist with a celebratory performance featuring many of his works. The student musicians skillfully captured Coltrane’s dynamic and colorful repertoire, and more importantly, their candid performance displayed the enrapturing effect of Coltrane’s music.

Michael Odé, a Conservatory sophomore Jazz Percussion major who organized the performance, sent out an email to friends and fellow jazz musicians a few weeks ago that detailed his intentions to put together a concert in honor of the saxophone idol. “Everyone who plays jazz has been influenced by Coltrane,” said junior Jazz Saxophone major Jake Abramson, “but Mike did a really good job of choosing musicians who had [been particularly influenced by Coltrane’s music].” According to Zachary Warren, Jazz Trombone major and senior, the group of musicians rarely rehearsed the set list as a group.

Odé garnered a slew of enthusiastic responses from several fellow jazz musicians, and together the group produced a varied yet streamlined production. Despite not being a saxophonist, Odé has strong ties to Coltrane’s brand of jazz. “John Coltrane has been a really big influence on my musical development,” Odé said. “He’s probably one of the main reasons I went to school to study jazz.” The musician’s developed passion for Coltrane has been fueled by similar admiration for the saxophonist among Odé’s professors, including Billy Hart, assistant professor of Jazz Percussion. “The thing about Coltrane’s music is that it’s very spiritual,” said Warren, who is taking a semester off but returned to campus for the concert. “Just to play that music is an experience within itself.” For Warren, Coltrane’s music is more than just an inspiration, but “flows through” those who play it and listen to it. “It’s not about being wrong or right,” he said. “It’s about playing what you feel.”

The first act of the show included some of Coltrane’s earlier works, including songs from his second album, Blue Train, while the second act featured music from later in his life, such as Coltrane’s familiar version of “My Favorite Things”. Whereas many other jazz performances — albeit technically sound — lack a theme, the Coltrane concert provided a unifying reason to gather. Though the audience was mostly composed of Conservatory Jazz majors whose music careers have all presumably been touched by Coltrane in some manner, the vibe in the Cat was welcoming toward people who just wanted to listen to some Coltrane. Not only did audience members get to hear classics from a beloved artist, but they were also treated to the sheer passion and impressive talent of a group of young musicians.

Although the performance centered on a renowned saxophonist, each of the instrumentalists included in the performance — trumpet-players, pianists, bassists, and guitarists — all contributed to the musicians’ fierce zeal for Coltrane and honored the aspects of their own skill that have been influenced by him. The event did not appear to feature the saxophone at the exclusion of other instruments; even Jazz Saxophone major and double-degree sophomore Mel Maetzener, who played a starring role, appeared in the second act playing an alto clarinet. During some of the songs, more than one musician would perform on the same instrument, creating a powerful sound that positively affected the crowd’s spirit. The concert was exciting, with each of the performers getting a brief moment of glory during their solo. Though Ode was the only musician who was featured on every song of the evening, the true zenith of the concert occurred when Jazz Percussion major and senior Zaire Darden’s unbelievable drum solo in the second act caused jaws to drop.

Ode said that the highlight of the performance was “the [uplifting] vibe in the room.” Jazz Trumpet major and sophomore Noé Mina said he agreed: “It was cool, too, because not all the musicians that play get to come together for one concert.” Ode nodded his head in agreement. “It’s hard to pull out one [highlight] collectively,” he said.

With regard to his experience, Warren said, “[It was] a blessing to hear everybody express themselves on stage [and] to sit and listen to somebody else [interpret the] special melodies [of Coltrane].”

Ode is set on making the event an annual one, and fellow Jazz majors are similarly enthused about the impressive outcome of the concert.