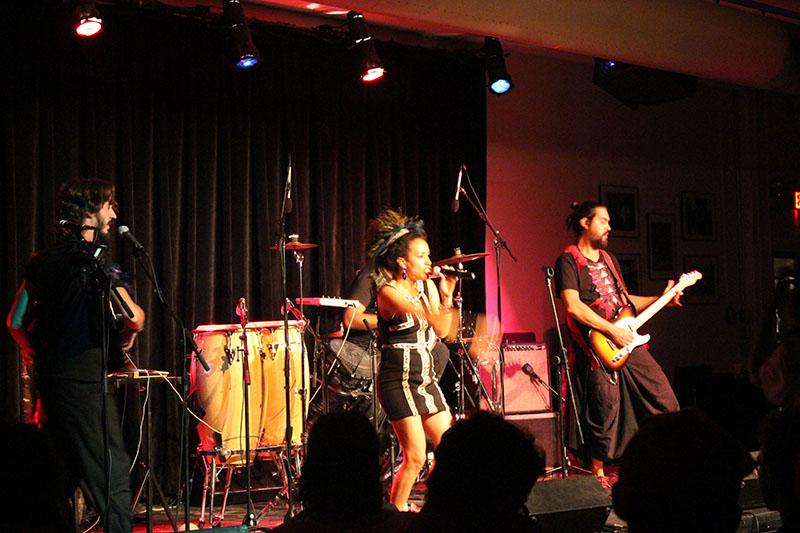 La Yegros performs for an intimate crowd at the Cat in the Cream in honor of Latinx Heritage Month. The concert was the first in the Argentina-based band’s inaugural United States tour.

Energetically taking the stage in white-winged shoes and a bright green headpiece, Mariana Yegros, the conservatory-trained lead singer of the Latinx group La Yegros, kicked off her band’s inaugural U.S. tour at the Cat in the Cream this past Sunday. The group, who performed on campus in honor of Latinx month, received national recognition after appearing as part of the experimental theater De la Guarda. Having already performed in front of an audience of thousands, the group plans on continuing to play in front of audiences in big cities, including New York and Chicago. Clearly, the Cat in the Cream provided a more intimate setting than De la Guarda, and the band brought more than enough energy to fill the space.

At first, La Yegros looked uncomfortable crammed tightly into the small space while the audience remained seated. Later on, after the accordionist encouraged the audience not to be shy, many began dancing, and the band started to smile and connect with the audience. La Yegros, standing in an illuminated puddle of dimmed red spotlights, performed a number of styles, ranging from rap to something comparable to an LMFAO song superimposed over the Inception soundtrack. The overlapping of such diverse styles intrigued listeners, but was less melodic and more of an acquired taste.

When they performed the title song to their debut album Viene de mi, the group was more energized and danced around the stage, which garnered a positive response from the audience. During “Señora Chichera,” the audience even joined in at the chorus. La Yegros performed confidently and with precision. With a strong emphasis on instrumentals, Yegros herself only took the leading role a few times. The group, unlike most modern music groups, functioned as an ensemble rather than just as accompaniment to one lead performer. While the collaborative aspect of the performance was admirable, the audience struggled to connect with the performers, and although the music was lively, the impersonal approach of the performance sometimes made the music difficult to enjoy. Yegros rarely took the time to explain the inspiration or meanings behind the songs; instead, each song was merely followed by “Muchas gracias, thank you very much.”

Despite the band’s lack of continuity and minimal interaction with the audience, the experience was engaging in an unconventional way. The group can be expected to have a successful tour as they venture to perform at bigger venues this year.