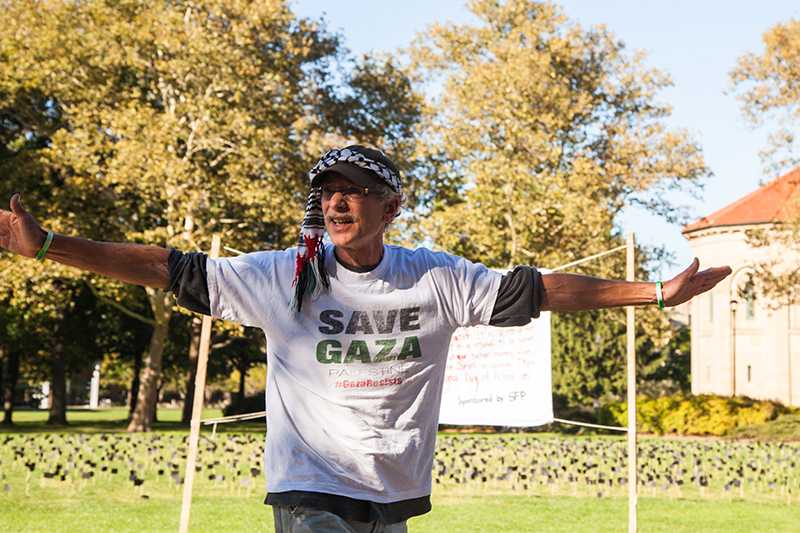 Students for a Free Palestine installed 2,133 black flags in Wilder Bowl this Wednesday in a call to action against the Israeli occupation of Palestinian territories. The flags represent the approximately 2,133 Palestinians killed in this summer’s Operation Protective Edge.

“This is not a vigil,” said a sign posted in front of the display. “This is a call to action. It is a recognition of our complicity in these acts of violence. It is a refusal to be silent.” The sign also encouraged viewers to sign a petition “demand[ing] the divestment of tuition money from corporations that perpetuate and profit from Israeli occupation.”

About 80 students and community members gathered near the flags on Wednesday afternoon to share statements of solidarity with the Palestinian people and to bring attention to various protests and initiatives, such as the push for College divestment from six companies involved in Israeli occupation. The informal gathering opened with a moment of silence and featured chants and a variety of student and community voices before closing with a unity clap.

College senior and SFP member Victoria Velasco says she hopes the event will be a call to action. “The goal of the action was to draw attention to the complicity of all of us here at Oberlin College in the continuing massacres in Palestine and to also call attention to the connections between the struggles of all oppressed peoples with Palestinian struggle,” said Velasco. “And it’s part of not only trying to educate our peers but also trying to build coalitions amongst student groups so we can better be in solidarity with Palestine and also, of course, we wanted to call attention to the divestment resolution, which has been ignored pretty much by the administration since it was passed by Student Senate.”

The installation and event are part of the International Day of Action on College Campuses for Palestine. This day of action was internationally held on Tuesday, but due to scheduling conflicts in Wilder Bowl, the black flags were installed on Wednesday, causing the installation to coincide with Rosh Hashanah, the Jewish new year.

“The Day of Action [has] provocative timing,” said College senior and SFP member Jacob Ertel. “I think that the mourning of Palestinian deaths and the condemnation of Israeli genocide against Palestinians and a religious holiday are not mutually exclusive occurrences. We don’t have to celebrate Rosh Hashanah and not be appalled and continue to condemn Israeli acts of violence and war crimes. … We don’t have to see them as conflicting in any way.”

Members of J Street U, who are holding their own vigil to commemorate lives lost in Operation Protective Edge next week, said in their event they hope to emphasize finding a path towards peace.

“We are saddened by the polarization within our community and want to offer a productive path forward based on establishing conditions for a sustainable, real peace,” members of J Street U said in an email to the Review. “To resist the divisiveness of the moment, we are bringing the memory of these dead together in an act of shared mourning, one that also acknowledges the asymmetrical power reflected in the number of dead. And while this act of mourning must reflect the power endemic in the conflict, so too must it reflect upon the power present at the event itself; the unique power of Americans to help bring about an end to the root causes of the death: occupation and conflict.”

J Street U will be holding a vigil Wednesday in Wilder Bowl.

“The goal of this vigil is to seriously grapple with the loss of life in Gaza and Israel, to present a vision for a better future and recognize our responsibility to make choices to achieve it,” said members of J Street U. “[Our] vigil is an opportunity to address the deepened divisions in our campus community and to shift the conversation away from blame and towards a politics of responsibility.”