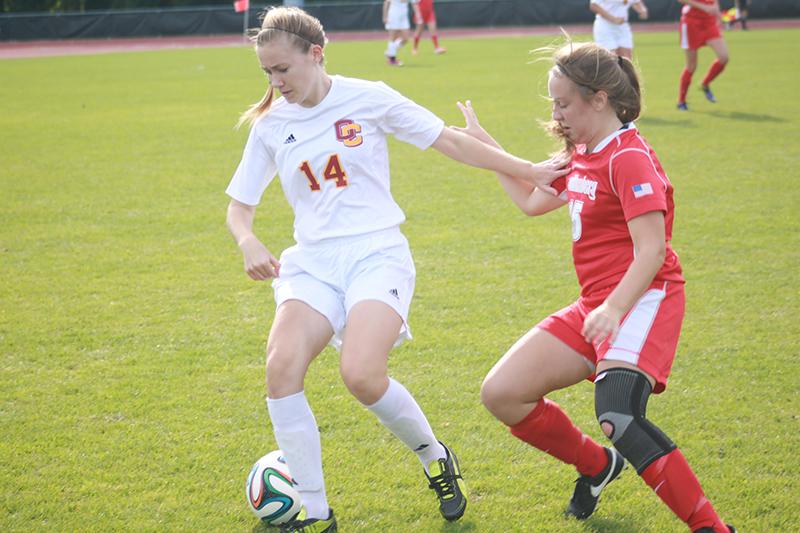 The women’s soccer team won its seventh consecutive game this past Tuesday, pushing its record to 7–3 and leaving the team with its greatest number of wins in any season since 2002. The win, a 1–0 victory over the Saint Vincent College Bearcats, came on the heels of a thrilling 2–1 double overtime win against the Wittenberg Tigers last Saturday in the Yeowomen’s first conference match of the season.

The win against Wittenberg is especially indicative of the team’s progress this season, since the Tigers defeated the Yeowomen 6–0 the last time the two teams met.

“We came out, and I think everyone was a little nervous,” said first-year Hannah Cook. “But once we settled in and realized we were on the same level as this team, we started to put stuff together, and the momentum really shifted toward us as the game went on. I think once we got the equalizer, the team really started to believe we could do it.”

The Yeowomen fell behind 1–0 in the game on a Tiger goal at the 52-minute mark, but first-year midfielder Gwennie Gardiner answered with a goal less than 12 minutes later.

The game remained tied all the way to the 103rd minute, when junior Ellie Huizenga knocked in the game winner off a pass from Cook.

“There was a foul at the top of [Wittenberg’s penalty] box, so we had a free kick,” said sophomore Camille Sacristan. “Hannah Cook slotted the ball perfectly in behind their defense, then Ellie played it really nicely into the corner of the net.”

After the come-from-behind victory over the Tigers, the Yeowomen traveled to Latrobe, PA, in search of their seventh consecutive win last Tuesday. The game was played in less than ideal conditions, but the team was still able to pull out a 1–0 victory on another clutch goal from Gardiner at the 59-minute mark.

“It was a weird game because the field was tiny and the turf was fast, so it made the game itself really fast,” Cook said. “We’re used to training on the really nice grass that we have here, and it’s a very different surface. So that took a lot of time to adjust to. But we were able to do that towards the end; I put a ball through to Gwennie, who ran onto it and finished it.”

Though the team was able to pull out a win against the Bearcats, Sacristan felt the team didn’t play to its full potential in the match.

“The field conditions weren’t what we were used to, but we adapted well,” she said. “It wasn’t the best game we played, but we didn’t get down.”

Head Coach Dan Palmer also noted that the team struggled early against Saint Vincent, but made the necessary changes in the second half and improved its play.

“I thought we got off to a slow start because of the field conditions, but we slowly and surely figured it out and made good adjustments in the second half.”

Despite the seven consecutive wins, the team isn’t resting on its laurels and still hopes to improve its performance enough to make a mark in the North Coast Athletic Conference.

“Your communication as a team can always be better,” Sacristan said. “We’ve been doing really well so far, but I think that we can definitely keep improving. It’s just about keeping our intensity up now that we know that we can win against good teams.”

Cook said she agreed and hopes the current winning streak will help keep the Yeowomen’s mindset in the right place throughout the rest of the season.

“We are always trying to improve our defensive shape and our attacking creativity,” she said. “Once you kind of get into the swing of winning, usually that momentum helps you game to game, but there are still things we need to improve on.”

The team also played against Baldwin Wallace University on Thursday, Oct. 2, bringing their winning streak to eight games with a 3–1 win.