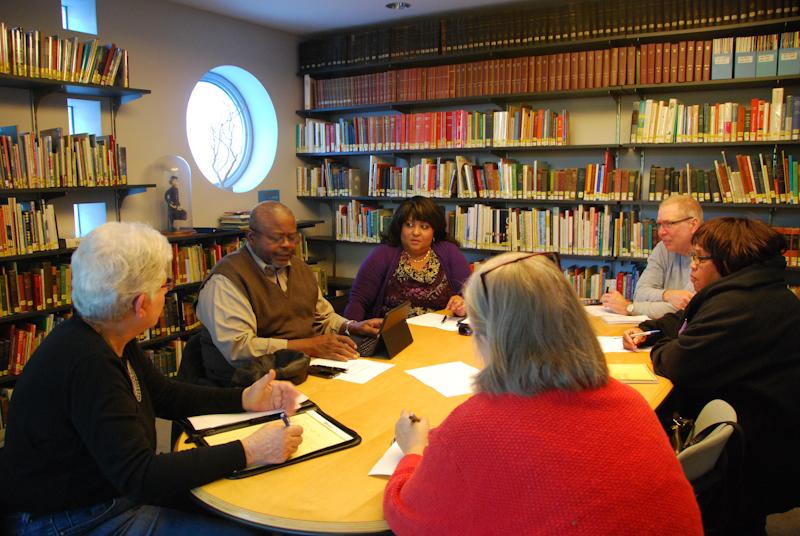 Members of the Oberlin Community Benefits Coalition meet in the Oberlin Public Library to discuss the next steps for their organization. OCBC hopes to create more jobs and further community interests by forming Community Benefit Agreements with new development projects in town.

The Oberlin Community Benefits Coalition, founded in March of 2014 in response to the Oberlin school district’s K–12 campus proposal, is now looking to organize and expand its mission. OCBC is an organization focused on creating community benefit agreements, agreements intended to represent community interests in large-scale development projects.

OCBC’s organizing efforts are a response to the delay of its original project, which was to create a CBA for the construction of the new K–12 campus. The school district was unsuccessful in securing state funds for a new school, causing the project to be delayed and divided into phases. OCBC is still interested in working with the developers to create a CBA for the school project, but they’re also using this delay as an opportunity to further organize their coalition.

“Given that the school project … was our primary focus and our only focus really for the early stages of our existence … we stepped back a bit and decided to now spend some time working on some kind of planning retreat,” said OCBC co-founder Arlene Dunn.

During the next retreat, OCBC plans to create a strategy and organizational structure that will support their pursuit of these goals.

“We started focusing just on the schools … but there’s all these other things, so we need to step back and look at how [we are] going to structure [our organization]. What are our priorities? Because we want this to be successful,” said Oberlin City Council and OCBC member Sharon Pearson. “We want to see these as the default setting — that this is not something that we’re forcing on somebody to do, but that this is the first thing that anybody who’s going to build in Oberlin is going to think about … how [they] involve the people who live here.”

OCBC has identified five Oberlin anchor institutions it hopes to work with in the future: the College, the city, Oberlin City Schools, Mercy Allen Hospital and Kendal at Oberlin. OCBC hopes that through developing relationships with these institutions, ultimately every construction project will include a CBA.

The College did not sign a CBA before construction began on the Oberlin Inn, located on the corner of College Street and Main Street. The project began before OCBC decided to take a broader approach to CBAs, and, according to Dunn, there has been little effort on the part of the College to reach out to the local community for construction jobs.

Pearson sees the creation of community jobs through CBAs as essential in responding to Lorain County’s lack of public transportation and combating the county’s 21 percent poverty rate.

“We don’t have public transit, so people can’t get to the job centers, so we’ve got to find a way to create the jobs locally and the jobs are here. We just [have to] change the processes and establish structures that allow people who may not even have skills to have an entry point into the various trades,” said Pearson.

OCBC is also deciding whether it will join a nationwide CBA organization or function independently. John Goldstein, the civic engagement campaign director of the Partnership for Working Families, has worked with OCBC through webinars and conference calls to help organize the coalition.

“The Partnership is applying our network’s collective expertise by supporting local CBA coalitions in over 80 cities, including the Oberlin Community Benefits Coalition,” said Goldstein in an email statement to the Review. “Together, we have explored how to link new projects (school construction and private development) to job creation, job training, environmental sustainability, affordable housing and other deeply felt community needs.”

CBAs are part of a larger nationwide movement to ensure that local communities benefit from new development projects, particularly marginalized groups such as low-income individuals and communities of color. The unique requirements of each area mean CBAs vary greatly depending on the location and project.

“It’s all these groups that come together that are looking really for a piece of the pie that represents what community is all about. It takes a lot of different civic groups,” said Pearson. “The strength behind CBAs is when you have a lot of support from civic established groups, not just interested people involved in the process, and coming to an agreement as to what is the benefit to the community so that we can maintain or increase what we have. So that’s why there’s no one fit for every community. It depends on those community needs.”

CBAs around the nation, however, have been criticized for their limited impact and sometimes narrow representation of the community.

Carrie Handy, Housing and Economic Development Officer, believes the goals of the city and the goals of OCBC are very similar and questions whether CBAs are entirely necessary in city projects.

“All those things that are usually in the Community Benefits Agreement could be in [the city’s] development agreement,” said Handy. “I think the city wants that stuff, too. … whether we actually need a separate agreement for that, I don’t know.”

Handy spoke specifically about the Green Acres project, a project OCBC hopes to sign a CBA with next year. Green Acres is a mixed-income housing development and park that will be built on city-owned land off of East Lorain Street and State Route 511.

Ideally, OCBC also hopes to create a CBA for the proposed Lorain County Health & Dentistry branch opening on Main Street, but, due to the condensed time scale and small size of the project, they are not confident an agreement can be reached.