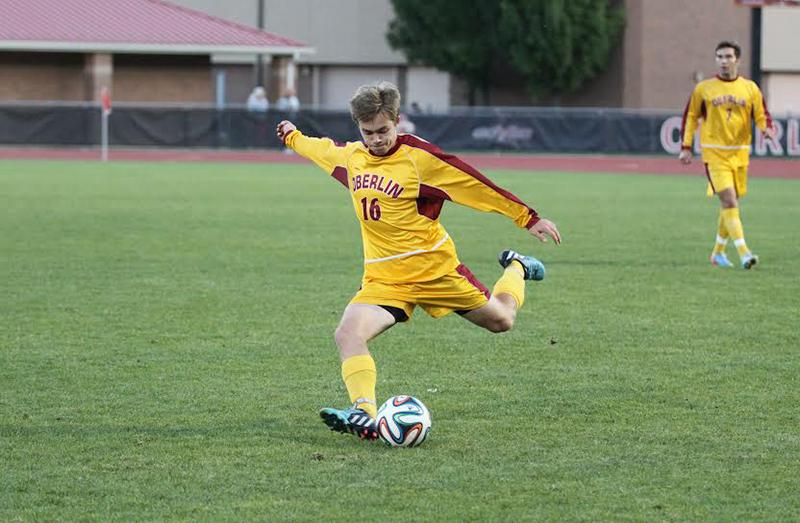 First-year Matthew Bach-Lombardo rears back to kick the ball at a home game this season. The Yeomen are heading into a stretch of seven consecutive conference games with a record of 4–5–1.

After making the trek to Crawfordsville, IN to play the Wabash College Little Giants, the men’s soccer team returned with its first North Coast Athletic Conference loss last Sunday, Oct. 5. The physical contest resulted in a 1–0 victory for the Little Giants, ultimately setting the Yeomen back to 1–1 in NCAC play and 4–5 overall.

An early goal shook Oberlin’s rhythm in the 21st minute, and that was all it took for an undefeated Wabash to finish off the contest. The lone goal came from the foot of forward Riley Pelton as he neatly tucked away an assist from midfielder Zach Woloshin.

“We started very slowly. Wabash was very disruptive and very physical, and it really threw us off,” said Head Coach Blake New. “They are 10–0–2 for a reason, and they are tough to play against, even though it isn’t a style that we like to play. I wouldn’t say there was much soccer being played by Wabash.”

By the end of the game, Wabash had collected a total of three yellow cards and 13 fouls to the Yeomen’s eight fouls and zero yellow cards. Despite the physical nature of Sunday’s contest, first-year forward Tim Williams commended his team for maintaining its composure.

“They were taunting us and being jerks, and we didn’t get into it. They were trying to get at us the whole time and we kept our heads really well,” said Williams.

Senior midfielder Sam Winward also commented on the physicality of the match but added that he thought the Yeomen could have held the Little Giants off better than they did.

“They outplayed us and had a very physical side. They also worked harder than us, especially in the beginning of the game,” said Winward. “Wabash is just a lot of big, feisty guys that are trying to get into fights, and we are just kind of wimpy. We need to be stronger, and we need to toughen up a little bit.”

By the end of the second half Oberlin had stepped up its play and had outshot Wabash 6–5, but the effort wasn’t enough to tally a score against sophomore goalkeeper Dayton Jennings. Jennings maintains an impressive .897 save percentage, and the NCAC honored him as the Men’s Soccer Player of the Week on Tuesday, Oct. 7.

“As we got into the second half and we made some adjustments, I thought we did a good job of fighting when we needed to fight,” said Coach New. “We created some chances, and in the end we just were not able to capitalize.”

Sophomore Nick Wertman also thought his team improved its play in the second half of the game.

“I thought in the second half we did a much better job of creating chances and also of handling the physicality of the game,” he said. “We got used to the dirty side of it and kept up with them.”

“Johnny was really dangerous up top,” said Winward. “You only need one chance. He had a great shot on goal at the end that almost went in, and we would have been right back in it.”

Praise was also heaped on Kuijpers.

“Oidie played great,” said Wertman. “He made some huge saves and really kept us in the game. The man of the match for me was definitely Oidie, because they had a lot of opportunities and he turned them away.”

The Yeomen will now close out their season with eight consecutive conference games and a golden opportunity to make some noise before the start of the playoffs.

“We need to realize that this is not the end of the season and we have a lot of time left,” said Wertman. “The sky hasn’t fallen.”

Coach New says the team has been in a similar position before and was able to succeed.

“This happened to us back in 2005,” he said. “We came back from Brazil and we went 3–5–1 in non-conference play, and then in conference we went 6–2–1 and ended up being second place and hosted a playoff game. I think we can definitely do it again.”

Williams also seemed confident that the team is capable of turning things around.

“I think that for the coming into conference play we need to start every game with a high work rate and intensity,” he said. “We have had a few unlucky games where we have let some wins go, but we are just as talented as any team that we play. If we put in the work, then we will get the results we want.”

Putting the tough loss to Wabash behind them, the Yeomen took on the Case Western Reserve University Spartans on Wednesday, Oct. 8 at home. The match remained scoreless until the second half, when the two teams went tit for tat on goals, bringing the game to a tense 2–2 draw that took the teams into overtime. Sophomore Nick Wertman tallied his fifth goal of the season off an assist from first-year Matthew Bach-Lombardo, who would also move to set up the next goal for the Yeomen as junior Slade Gottlieb tucked away the fourth goal of the match.

Despite numerous dangerous scoring opportunities, neither team managed to score during overtime and the game concluded in a 2–2 draw. The tie puts the Yeomen at 4–5–1 overall.

The Yeomen will go on the road to face the Hiram College Terriers, an NCAC foe, at 7 p.m. on Saturday, Oct. 11.