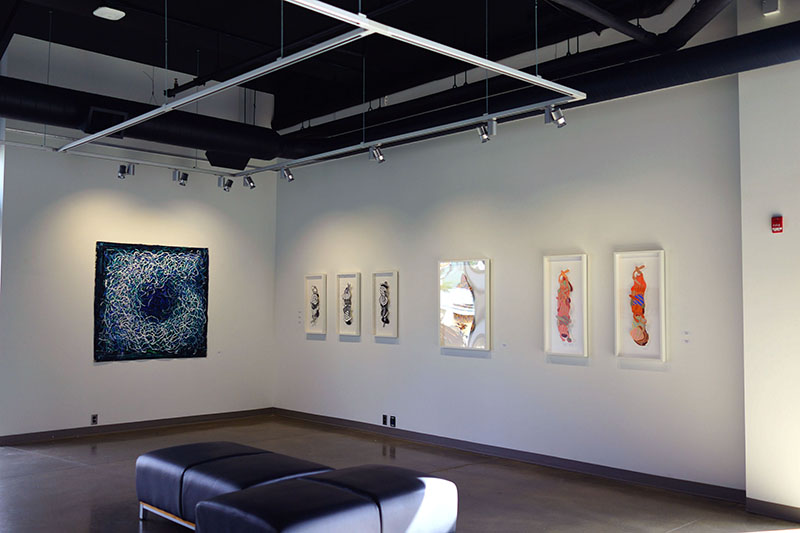 Selections of art hang in the lobby of the Richard D. Baron ’64 Art Gallery as a part of the faculty exhibit titled BYWAY. The artists employed various media to comment on contemporary political and ideological ideas.

“The Future is in the Lobby” is an appropriate title for the first piece of art to welcome visitors into the Richard D. Baron ’64 Art Gallery for the faculty exhibit BYWAY. Assistant Professor of integrated media Julia Christensen’s 3-D printed sculpture exemplifies the innovative talent of Oberlin’s own professors.

Nguyen-duy, Art department co-chair and professor of Studio Art and Photography, submitted three large photographs of Vietnam, where he lived as a child, depicting schoolchildren playing in bright blue and stark white school uniforms. The vast flora-laden landscape that provides the backdrop bursts with saturated colors and lifelike-textures that appear unnatural, almost staged. The juxtaposition between the children, who appear strangely posed, and their oddly intense green surroundings appears to be a commentary on children within the lush green landscape Nguyen-duy remembers as a warzone from his childhood, during which he lived only 30 kilometers away from the DMZ of the

18th Parallel . Coleman, a visiting painting instructor, depicts women as grotesque rather than idealized in her politically intriguing and subversive “Gentleman’s Club.” The painting portrays a male space diluted with images of women. In her other painting, “Girl Crazy,” Coleman portrays women with varied body types, ethnic backgrounds and ages. The painting’s border is adorned with labels notoriously associated with women, ranging from “slut” to “spinster” to “girl next door.” The women portrayed are far from picturesque, and are painful to look at, only strengthening Coleman’s artistic statement of solidarity among women.

Assistant Professor of Stu- dio Art Yannuzzi’s somewhat jarring mixed-media piece “What the Water Told Me” pays homage to the Frida Kahlo painting “What the Water Gave Me.” The work includes abstract images and an unlikely combination of colors. Several painted brown “x” marks slash over the rest of the work, which is water-like in texture. Several small doodle-like images appear in various areas of the duck’s head at the bottom of the piece, and a vague white image of a water lily appears in the bottom righthand corner. Yannuzzi’s two other mixed media pieces “Frack Fuck” and “River Bed 1” are also on display in the gallery.

BYWAY is the road less traveled. The faculty artists radically incorporate political and ideological concepts that represent a departure from what one might expect. Though the diverse ideas manifest in different aspects of the artwork, BYWAY is ultimately cohesive. The exhibition is satisfyingly complete and exemplifies the profound talent within the Studio Art faculty.