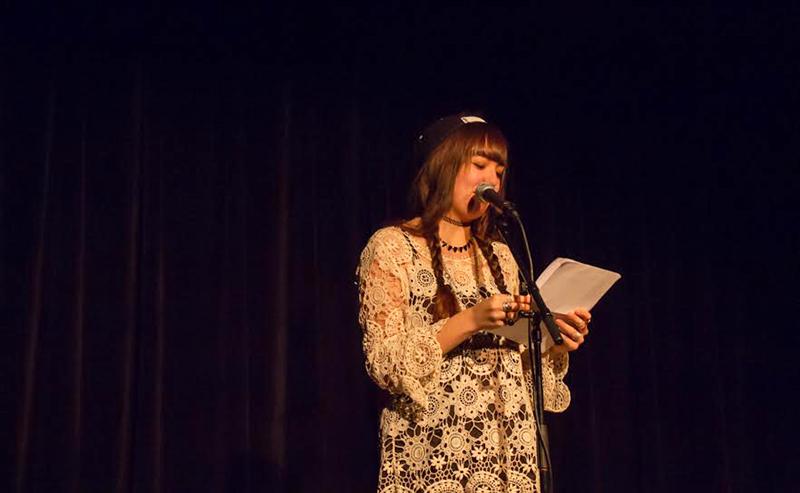 Eccentric poet Mira Gonzalez entrances audience members with a reading. A collective of poets gave a reading as part of its Marry, Fuck, Kill (Cuddle) tour Tuesday night at the Cat in the Cream.

“My desire to meticulously catalog all of my relationships in writing is more important to me than the relationship itself,” said Mira Gonzalez, reading from her essay “Why You Don’t Want to Date Me” at a reading at the Cat in the Cream Tuesday night, delivering frank disclaimers to any hypothetical suitors in the reasonably sized crowd. The Los Angeles-based writer is one of four women headlining the Marry, Fuck, Kill (Cuddle) reading tour sponsored by the independent non-profit press Short Flight/Long Drive Books.

Chloe Caldwell, Elizabeth Ellen and Chelsea Martin, along with Gonzalez, complete the traveling collective. During their visit to the Cat, the four writers offered an eclectic range of writing genres, styles and tones, but “Why You Don’t Want to Date Me” exemplifies a connecting feature: unapologetic candor. In their writing, Caldwell, Ellen, Martin and Gonzalez chronicle the obsessions, discomforts and confusions inherent in intimate relationships, with unflagging commitment to emotional authenticity and a shared aversion to overwrought language and presentation. At its best, their approach produces sharp, affecting, minimalist gems delivered with subtle assurance; at its worst, their rawness comes at the expense of technical development, and readings too deadpan for their own good.

College senior and poet Jessica Tolbert, the event’s coordinator, took the stage to open the reading. She described the process by which she had come to organize the reading: Three of her poems had been accepted by the Hobart online literary journal book division, SF/LD, and will be published in November. This connection prompted Ellen, the journal’s coeditor, to email Tolbert requesting a tour date in Oberlin, which Tolbert arranged with the Cat in the Cream.

After introducing the group, Tolbert read three of her own poems: “Tradition,” “Heirlooms,” and “Book of Others.” Tolbert’s language is lustrous and rich with evocative imagery, but grounded in gritty detail. The works she shared grapple with relationships, cultural heritage, family dynamics and coming-of-age in exquisitely hewn lines. Her delivery was often effectively understated, though at times too flat to do justice to the beauty of the language, or too fastpaced to give the listener ample time to tease out the intricacies of meaning from the layered poetic textures.

After Tolbert finished her reading, she invited Elizabeth Ellen to the stage. Ellen hails from Ann Arbor, MI, and has published numerous prose works over the past decade in various online and print journals. SF/LD, published her most recent collection of stories, Fast Machine, in 2012. On Tuesday night, she read from a collection titled Elliot Smith’s Songs, a series of rambling direct-address poems to the narrator’s apparent ex-lover. Ellen’s unfettered streams of consciousness are studded with wry emotional observations and pithy pop culture allusions, but their stylistic repetitiveness becomes gimmicky after a while, and Ellen’s meandering, untrimmed lines can sound ungainly rather than emotionally revealing. Her deadpan delivery accentuated the poems’ funny moments, but also their monotonous rhythm. Chelsea Martin then took the stage with selections from her book, Even Though I Don’t Miss You, which SF/LD published in 2013. The Los Angeles-based writer’s reading offered punchy episodic prose poems that chronicled the ups and downs of a relationship with tenderness and subdued hilarity. “You said, ‘You have a curlicue in your pubic hair.’ I said, ‘Oh,’” Martin read, in a typically droll line. Where Ellen’s lines were sometimes clumsy and self-indulgent, Martin’s were finely chiseled, evoking the discomfort, confusion and alienation of earnest but complicated love through sharp, well-chosen details. While her delivery occasionally lacked full commitment, her understated approach often served her well, endearing her to the audience and allowing the poetry to speak for itself.

Gonzalez succeeded Martin. After “Why You Don’t Want to Date Me” came “Chris,” a bizarre and ribald autobiographical account of a sexual encounter with a 43-year-old man. Provoking giggles and grimaces in equal measure and often simultaneously, the piece succeeded in its anti-erotic depictions. “He made a strange guttural noise and I thought maybe he was going to vomit,” Gonzalez said of her partner’s grotesque orgasm. Her assured, ironic delivery proved a pitch-perfect complement. However edgy the prose, shock value was not its apparent intent. At the poetry’s core, the relationship between these two characters resonated on an unexpectedly moving human level, providing a gratifying climax to the evening.

Chloe Caldwell closed the event. The writer shared excerpts from Women, her autobiographical novella about a sexually confused 20-something and her affair with an older lesbian in a committed relationship, which SF/LD published this month. Caldwell’s delivery was poised and powerful. The hollowness of her voice evoked the stunned bemusement with which one narrates an explosion, effectively expressing the raw poignancy of her prose (“I buy anthologies about women coming out of the closet and leave them on the coffee table. In the morning I masturbate repeatedly”). With steady assurance, Caldwell guided listeners through her narrator’s tumultuous soul-search, gliding effortlessly from anguish to exhilaration, fragility to overconfidence, longing to revulsion, providing the finishing touch to a sometimes messy but always memorable evening.