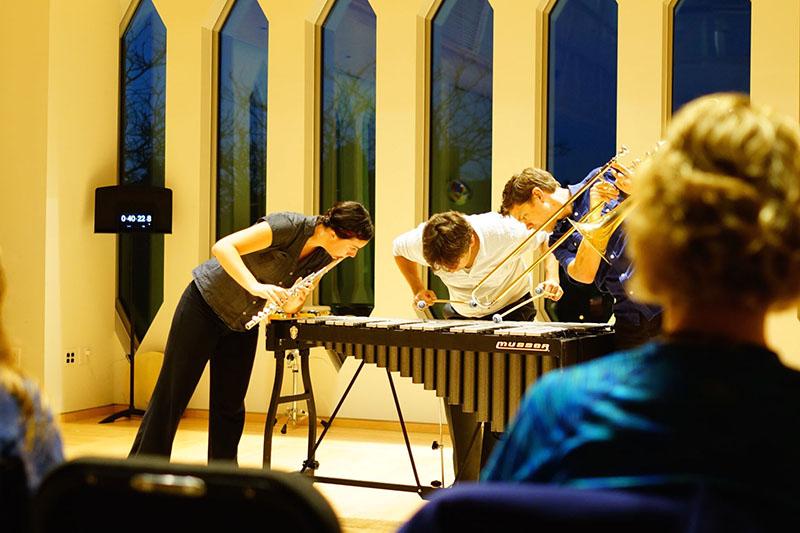 Hybrid arts ensemble The Fourth Wall makes its Oberlin debut last Tuesday with a lively audience-driven workshop and performance. The group performed a blend of musical styles with elements of dance and theater.

The Fourth Wall, a performing trio which integrates music, theater, dance and other artistic disciplines, discussed its unique creative process in a workshop on Oct. 28 in Bibbins Hall. The group’s members, trombonist C. Neil Parsons, OC ’98, flutist Hilary Abigana and percussionist Greg Jukes, have performed across the country at contemporary music and composers’ symposiums, fringe festivals and universities since forming in 2010. The members use experiential activities to introduce their audiences to the realm of interdisciplinary performance art.

The Fourth Wall is an artist-run organization; each member shares the responsibility of creating, arranging and organizing performances. “We spend quite a bit of time looking to organizations outside of music for inspiration artistically, as well as in business, in the organization aspect,” said Abigana when describing the process of creating a show. The group has drawn inspiration from the modern dance company Pilobolus, working similarly to collaborate on the choreography of each piece.

“Much of collaboration is just learning how to talk to each other, just figuring out a common language,” Parsons said.

The Neo-Futurists, a theater group founded by Greg Allen, OC ’84, also influenced the hybrid ensemble’s programming. The Fourth Wall borrowed the Neo-Futurists’ technique of randomizing performances through the involvement of audience members. In what is the longest-running performance in Chicago, the Neo-Futurists provide a menu of 30 short plays to the audience, allowing audience members to choose which plays they want to see first. This is just one way that the ensemble encourages breaking down the fourth wall between performer and audience. The Fourth Wall is similarly all about exploring human interaction and its randomness, which gives the group’s shows high energy and sometimes silly vibes.

Although The Fourth Wall cites other organizations as influences, it is clear that this group creates something totally unique in every performance. “I have never seen such an original ensemble like Fourth Wall. It’s amazing to see such welltrained musicians having so much fun on stage combining classical music with other fine arts,” said Conservatory sophomore Oliver Villanueva.  During the workshop, the group answered some questions about musicianship, technique, getting gigs and creating a profession in the music industry outside of performing in an orchestra. Participants in the workshop were then invited to integrate skills from different disciplines in the performing arts. All of the chairs in the room were moved into a circle as Jukes explained how the activity would address how “a powerful thing that many musicians don’t put a lot of thought into is the voice and presenting yourself verbally.” The activity also involved sending the alphabet around the circle. Eventually, Jukes sent multiple alphabets in different directions so that everyone could practice sending and receiving messages with sound and body language. Parsons said the activity highlighted some of the most important aspects of The Fourth Wall’s performance techniques. “It’s about opening up your ears, and opening up to be more creative in the moment and responsive to everything that is happening to each other and with the audience,” he said. The informality of the workshop made for an interesting discussion about the group’s creative process and emphasized the appeal of communicating artistic ideas through mul

tiple forms. The workshop showed the many ways in which this engaging and immersive ensemble breaks down walls — not only between the artist and audience, but also between disciplines and artistic endeavors. “[The Fourth Wall] is refreshing because they integrated the audience in a way that was constantly engaging, and it still showcased their immense talent as chamber musicians and individual instrumentalists,” said Conservatory sophomore Tasi Hiner.

During the workshop, Parson said that he finds performances to be more interesting for the audience and the ensemble when there is something unexpected, when people can let go and really be in the moment. “When the ensemble is flexible enough to go with a new idea, that’s when it’s really thrilling,” he said.

The Fourth Wall is successfully spreading the gospel of the hybrid arts to musicians, and the group is passionate about encouraging students to explore the interdisciplinary aspects of the arts in their own careers.