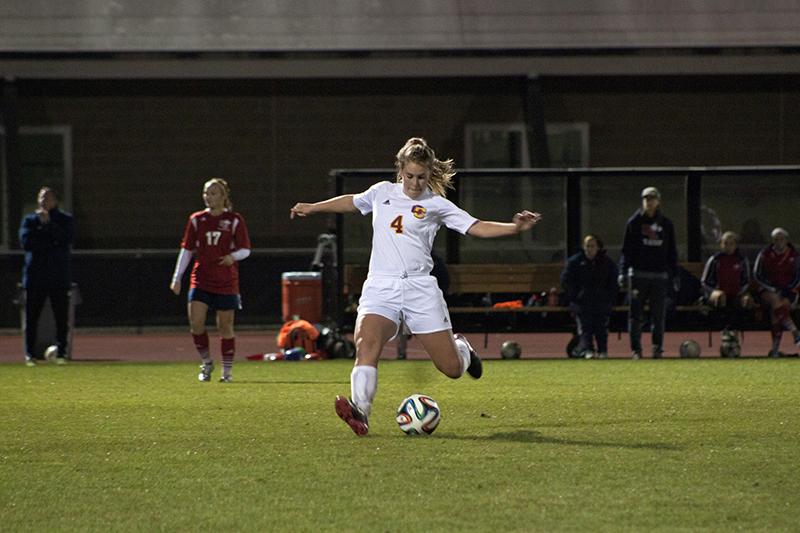 First-year Caitlin McCuskey rears back to kick the ball. The Yeowomen play their final regular season game this Saturday at 1 p.m.

The women’s soccer team saw its nine-game winning streak come to an end over fall break as it plunged into the thick of North Coast Athletic Conference play, ultimately losing three of four games.

The streak ended when the Yeowomen fell to the Allegheny College Gators 2–0 on Tuesday, Oct. 24. Their tough stretch continued with two subsequent conference losses to the DePauw University Tigers and the College of Wooster Fighting Scots, each 2–0.

However, the team bounced back and defeated the Ohio Wesleyan University Battling Bishops 1–0 on Saturday, Oct. 25. Both teams endured a goalless stalemate for the majority of play, until first-year midfielder Gwennie Gardiner broke the tension in the 82nd minute with her eighth goal of the year.

Most recently, the team faced fierce competition from the Denison University Big Red when it fell in a 5–0 loss on Tuesday, Oct. 28. The Big Red scored three unanswered goals in the first half and quashed the Yeowomen’s chances for a comeback by tallying two more goals in the second half.

“[Denison was], on paper, the best team [we played] this year,” said Head Coach Dan Palmer.

The loss leaves the Yeowomen’s playoff hopes teetering on the edge, as their qualification depends on defeating the Kenyon College Ladies this Saturday, as well as a few other NCAC matchups ending in their favor.

In addition to a win over the Ladies, the Yeowomen must wait to see if the third-place Big Red can pull out a victory against the DePauw University Tigers, currently in fifth place in conference standings. Oberlin also hopes to see the Wittenberg University Tigers fall to the Allegheny College Gators to secure a position in the playoffs. If the Yeowomen advance, it will be the first time since 1989. Since then, the team has never finished higher than seventh in the conference standings.

Besides significantly improving Oberlin’s chances of making the conference tournament and bringing the team’s NCAC record to a promising 3–3, the Ohio Wesleyan win also brought the team’s overall season record to 10–6, tying a single-season school record not achieved since the team’s 1988 and 1989 seasons.

The convincing victory over the Battling Bishops was another significant feat for senior captain goalkeeper Kate Frost when she tallied her fifth shutout of the season. The blank sheet ties Frost for the most single-season shutouts in Oberlin women’s soccer history.

“It was really nice to win again,” Frost said. “We proved to ourselves that we can come back from a few setbacks and that [they don’t] really get us down.”

“We started getting back into our rhythm and playing as a team and playing the way we know how to play,” she said. “We all realized we could do it — we just had to regain our mental strength.”

Coach Palmer noted that DePauw was a particularly difficult game for the Yeowomen because of post-midterm exhaustion and a roster shortened by injuries, which he says started cropping up after the team’s ninth win.

“People have stepped up and worked hard,” he said. “We’ve been in every game — we just haven’t been on the winning side. I’m proud of how we compete and how we play.”

Sophomore midfielder Kitty O’Neill maintained a similar sentiment to that of Palmer. Prior to Tuesday’s loss against Denison, O’Neill said that the results would neither deter the Yeowomen’s playoff dreams nor detract from the year’s accomplishments.

“Whatever happens with our next two games, we’ve [already] done so much,” she said. “We’ve made a program where people are proud to come back to it and want to keep it going.”

The Yeowomen return to the pitch to face the Ladies in what will be a critical end to a noteworthy season this Saturday at 1 p.m. on Fred Shults Field.

“We still really want to make the NCAC tournament,” Frost said. “Even though we’ve already done so much, we still expect so much more from ourselves.”