In the Locker Room with Phillip Hsu, Joey Velez and Shonari Edwards 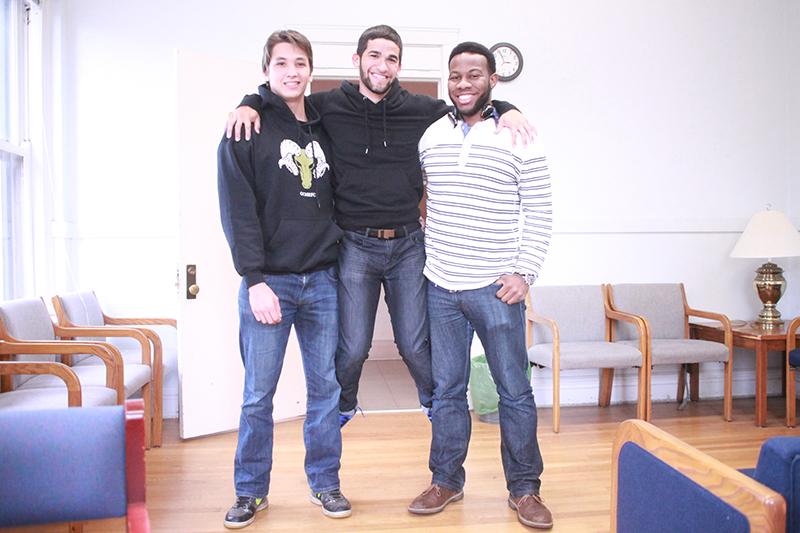 This week, the Review sat down with members of the Gruffs, the men’s rugby team — senior Phillip Hsu, sophomore captain Joey Velez and fifth-year captain Shonari Edwards — to discuss some of their favorite moments of the season, on-campus recruiting and this weekend’s game against rival Kenyon College.

How does this year’s roster size compare to those of past years?

Phillip Hsu: We have around 30 people this year, which is about double what we had last year. It’s about what we were at my freshman year.

Joey Velez: Last year, I was the only freshman, and now there are seven of them.

Shonari Edwards: It is about the same as my freshman year as well. I was one of two freshmen, but now there are a lot more, and we are a lot younger [as] a team.

Is the increase in membership a result of on-campus recruiting?

JV: Yeah, [since] the beginning of freshman orientation we sent around posters just letting people know it was an open practice and to get the word out about rugby. We were targeting freshmen just because it was their orientation, but there were other people around as well.

SE: Recruiting has improved a lot in the past five years. It’s an all-around effort to recruit more players.

How is your schedule organized? Do you play in tournaments?

PH: Fall season is set so we play one school every Saturday. There are five other teams within our division: John Carroll [University], Cleveland State [University], Baldwin Wallace [University] and Denison [University]. There are three subdivisions in Ohio, and if you are the top team in your subdivision, you go to regionals. They reformatted the league last year and then revised it again this year.

SE: We were one win away from making it to regionals last year around this time. It was a really productive season.

What were your individual and team goals for this season?

JV: My individual goal was to recruit people, just because this is the first year that I’m captain and I knew that a lot of players on our team are seniors who are going to be leaving. So my individual goal was just to recruit as many people as possible, especially freshmen because they are going to be the future of the team and we’re going to build from them. As for team goals, as a captain and president I always try to tell the guys that it’s a team effort regardless of position, what year you are, how many years of experience you’ve had and just push that aside.

SE: Speaking from five years of experience, my first goal was to be the best and get really enthusiastic. Now, as a very senior member of the team, I think part of what I want to leave and what I’ve been aiming to leave is to get everyone enthusiastic about the whole Oberlin rugby culture, knowing that we build from recruitment, and getting a lot of people excited about wanting to play rugby, wanting to be about rugby and getting to know a lot of good people. It’s really just making sure there’s a nice foundation of networking between the Gruffs before we all head out there into the real world.

PH: A personal one for me was [that] last year we had a lot of number problems and we had to cancel a couple of games. So it’s mainly just to get enough recruits and to have enough people so that the infrastructure stays around and the team actually continues when I graduate. Team [goal] — we have a lot of new guys, so it’s mainly just to make sure everyone actually knows how to play the game. We have a lot of guys come in who don’t know any of the rules and have never played before. So it’s basically getting everyone on the same page.

What have been the highlights of the season?

JV: My favorite highlight was when we put one of our freshmen in during the third game of the season because one of our regular guys got injured. He had never played rugby before and it was his first game. He did great throughout the game and made a lot of great tackles. He had a big role to fill, especially not really knowing the game, and he just did great.

PH: My high point was our game against John Carroll; they’re the second-best team in our division, and it was a game that we definitely played the best as a unit. And, [throughout] at least the first half, I think we were even with or outplaying them. And my low point was when my housemate [senior Patrick Murnen] broke his ankle in two places and had to get a titanium plate put in his leg.

Who is your biggest rival?

PH: I’d say the biggest rivalry we have is with Kenyon. They’re in one of the separate subdivisions, but we usually play them anyways. We actually have a pretty good rapport with them, and we usually enjoy playing them, but it’s always a pretty intense game.

JV: It’s a fun rivalry. Last year when I played, [the Gruffs] were all talking about Kenyon and saying that they were good sports and they’re a good team but we’re going to have a good time. Both times we’ve played them it’s been very intense, and it’s been fun.

SE: We also have a long history of playing Kenyon. The team has been around for nine years and in the earliest five years, [we] never won against Kenyon. It was only until very recently that we have been contending as a good team and actually winning some of the games, but they’re still a good team and it’s a good history we have. I’d say they’re our biggest rival and biggest competitor.

What is the best part of being on the rugby team?

JV: The best part of rugby is the team in general. On and off the field you watch out for one another, and that’s quickly established. After my first year, I could come up to either of these guys and ask to hang out, and if I ever needed anything, they’re always there. You want to fight to the end for one another and hit the guy who hit your guy. We are different from every other sport team because we want to watch out for each other in any way we can, and it’s guys you can depend on for whatever it is.