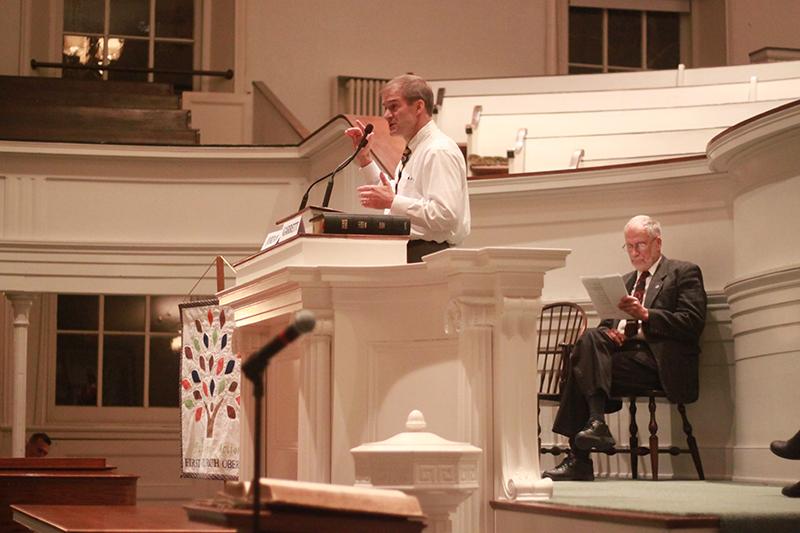 Ohio Senator Jim Jordan speaks at Oberlin Community Candidates night. Residents will be voting in this race as well as other races and issues this upcoming Tuesday.

Oberlin voters will line up at the polls on Tuesday, Nov. 4 to cast their ballots for a variety of issues and candidates.

At the top of the ballot this year is the Ohio governor’s race. Incumbent John Kasich (R) was elected to his first term in 2010 and is up for re-election, running against Democrat Ed FitzGerald. During his term as governor, Kasich has focused on job creation and implemented controversial tax cuts.

FitzGerald, who is a former FBI special agent, prosecutor and, most recently, county executive of Cuyahoga County, is running on a platform that emphasizes expanding access to public education across Ohio and restoring state funding for education and for local communities.

According to recent polls, Kasich has a 20-point advantage over FitzGerald, a large increase from the six-point lead he had over FitzGerald this July.

For federal office, neither of Ohio’s two senators are facing an election year, but all of the congressional seats are up for election, including Oberlin’s congressional representative for Ohio’s fourth congressional district.

Representative Jim Jordan (R) was elected to his first term in 2006 after serving on Ohio’s legislature for three terms. Jordan has been rated one of the most conservative members of the House and received an “A” from the conservative National Taxpayers Union for his efforts to cut spending.

Jordan’s opponent, Oberlin elementary school teacher Janet Garrett (D), is running for political office for the first time after receiving enough write-in votes during May’s primary to have a spot on the November ballot. Garret is running on a platform promoting effective education, economic security and environmental responsibility.

“I am most excited to vote for Janet Garrett on Tuesday,” said Oberlin College Democrats co-chair and College junior Madeline Peltz in an email to the Review. “She’s been a leader in her union as a schoolteacher for decades in Oberlin, and now she’s taken on the extremely taxing task of running for Congress in Ohio’s fourth district. I think it’s important that we vote to demonstrate support of her campaign against Tea Party leader Jim Jordan, our current congressman.”

Oberlin is a part of Ohio’s 13th Senate District, and in the senatorial race, Democrat Marcus Madison is challenging Republican incumbent Gayle Manning, who was first elected in 2010. Manning is a teacher who, during her term, has focused on fixing Ohio’s growing drug problem. Madison, who is currently a city councilor in Elyria, has been endorsed by LaunchProgress, a political action committee started by Luke Squire and Poy Winichakul, both OC ’11, that supports young, progressive candidates for state office.

Several county-level issues are also on the ballot. Lorain County has a 14 percent poverty rate, and the county has faced difficult financial circumstances in recent years, in part due to the Kasich administration’s cuts to the Ohio Local Government Fund. Issues 5, 6, 7 and 8 are about either new or renewed property taxes to support county programs.

Issue 5, a $1.2 million renewal levy, if passed, will continue to fund the Lorain County Board of Mental Health for the next 10 years. The LCBMH funds and evaluates the mental health services and facilities in the county serving children, adults and seniors.

Issue 6 would renew and slightly increase a levy to fund Lorain County Children Services, which provides care and placement for abused and neglected children. The proposed increase is a response to the 22 percent decrease in federal funding and a 17 percent decrease in state funding LCCS has experienced since 2009. The 0.3 mill levy increase would cost the owner of a $100,000 home 88 cents extra each month.

Issue 7 would raise funds for the Lorain County Crime Lab and drug task force. If passed, the levy will be used to improve turnaround times and return services cut by lack of funding, such as fingerprint and blood testing. The 0.08 mill levy was on last spring’s ballot but was not approved by voters.

Issue 8 would renew funding for Lorain County Metro Parks and connect 29 parks across the county.

Oberlin’s seven-member City Council has put five Charter amendments on the ballot. These issues seek to update the Oberlin City Charter and modify the way the city government functions, according to Oberlin City Manager Eric Norenberg.

“The Charter spells out how we will govern our city,” said Norenberg in an email to the Review. “Amendments to the Charter affect how City Council meetings will function, address the duties of certain boards and committees, or update other sections for the benefit of governing the entire community.”

Last year, an appointed committee reviewed the Charter and recommended these updates. This was part of a scheduled review process that occurs every 10 years. Issue 27 would give the Council the authority to change the testing procedure for applicants to part-time civil service, most importantly the firefighters and police forces, in order to address a shortage of qualified candidates.

According to Norenberg, this change is meant to allow job candidates who are not good test takers but are otherwise qualified to have a better chance of being employed by the city.

Issues 23, 24 and 26 are focused on the inner functioning of City Council, including a policy for discussing emergency ordinances.

Norenberg believes voters should be informed about these proposed charter changes and the other issues and candidates on the ballot.

“It is imperative that any voter do their due diligence to become a well-informed voter,” said Norenberg in an email to the Review. “So whether college students vote at home or in the community where they are studying, it is critical that they be an engaged, informed voter.”