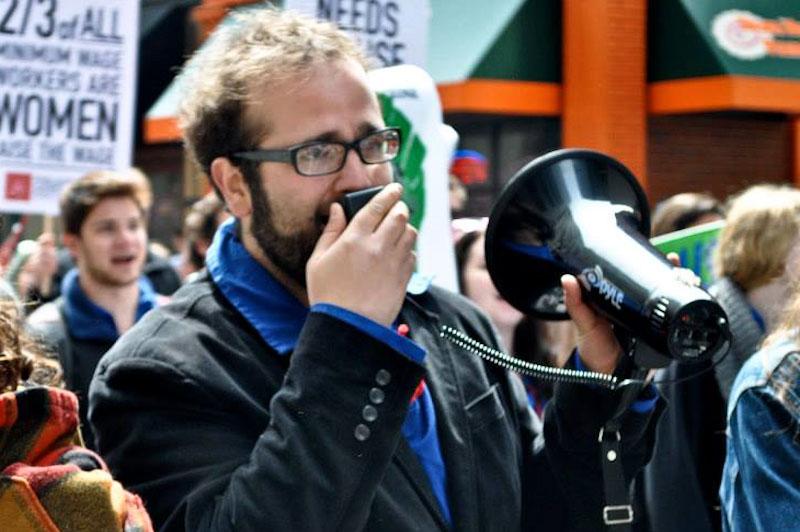 Pele IrangLaden, who is a Temple University student and organizer for the 15 Now campaign

Pele IrangLaden is a campus coordinator, Temple University student and organizer for 15 Now Philadelphia’s student branch, a part of the greater 15 Now movement. The 15 Now campaign, which was launched in January by Seattle City Council member Kshama Sawant fights to raise the minimum wage for fast food workers to $15 an hour. IrangLaden spoke with the Review about the stigma attached to fast food workers and the detrimental impact of student apathy.

Let’s start with the basics — what is the 15 Now campaign, and why is it necessary?

It’s really necessary because the federal minimum wage is currently at $7.25, and it’s been there since 2007, so it hasn’t kept up with inflation, cost of living or productivity. Over the past 20 to 30 years the productivity of workers has nearly doubled, but wages stayed virtually the same. The simpler reason is that America is the most unequally developed country in the world and also the wealthiest country in the world. We should be able to afford to pay our workers a living wage, and a living wage in most cities is $15 to $20.

In many places, the current minimum wage isn’t enough to afford the basics. Can you talk about the kinds of things that are lost for those living under the minimum wage?

People often have to make choices that people in America shouldn’t have to make — they might be taking home $200 or $300 a week, and rent in Philadelphia is usually around $500 per month. The whole paycheck would pretty much go toward the rent. And most fast food workers aren’t high school kids — they’re in their 20s and 30s. Many of them have dependents, have children. One woman had to decide between her son’s cell phone bill and new shoes for her children. You have to choose between health care, between paying rent, between education. Some fast food workers don’t have health care and can’t afford to go to college. To actually make a living wage on the minimum wage, you’d have to work around 150 hours a week, and that’s not really feasible.

A lot of the stigma attached to workers in the service industry is the same stigma that continually marginalizes low-income communities and communities of color. I’d say that this stigma often actively works against campaigns like 15 Now —what are your thoughts on that?

If you talk to people who are business owners, or people who are middle-class, most people think they got to where they were because they pulled themselves up by their bootstraps, or because they earned it and are entitled to the wealth that they have. There definitely is a stigma, and people definitely don’t understand the systemic oppression that creates the racial disparities and stigmas that we’re talking about — from gentrification to work discrimination, decades to centuries of poverty and having wealth stolen.

It’s important to emphasize that we don’t have allies in the big business world. Philadelphia City Council is majorly backed by Comcast, one of the biggest corporations in Philadelphia. Most of these people see it in a very person-to-person way. You’re talking about how someone is working 60 to 70 hours a week on minimum wage and not earning enough for a living wage, and they say they should get another job. Or, why don’t they work harder to get a wage. It’s a stigma of people who really don’t know. From what they understand, fast food work is a job you do in high school. These folks aren’t aware of the privilege they’ve been given, either from their race or class or place of birth. We fight it by putting oppressed voices at the center of the movement, and we fight it by giving these people a platform to speak out, so the people who try to ignore or stereotype the low wage workers of America actually hear their stories. These are people who have been making money to help their families since they were 14 and 15 and are really getting cheated out of their wages.

You’ve said that at Oberlin, you’re going to talk about low-wage workers on campus, as well as work-study and unpaid employees. How do these positions relate to the work you’re doing with the campaign?

We’re trying to engage and mobilize a student movement. One of the ways to get students involved is to get them to look at their own lives. For example, [some] of Temple’s biggest funders [are] PNC Bank and Comcast and other corporations. We have a custodial staff, security staff, food service staff — all folks that are paid minimum wages or poverty wages, while the administrators make six-figure salaries. Our head football coach makes over $1 million a year. It’s the kind of thing where we’re asking who actually makes the university happen. It’s not the football coach. It’s the security workers, the custodians, the food services workers.

Also, the majority of our faculty are now adjunct professors, which means they’re paid on a class-to-class basis and they don’t really receive benefits or have job security. I want to talk about on-campus organizing because the students are the ones who pay for the university. At Temple, 70 percent of the tuition goes to the functionality of the school. If it’s our money that funds these things, students have to have more power to say where it’s going, and that we don’t support the university paying workers poverty wages.