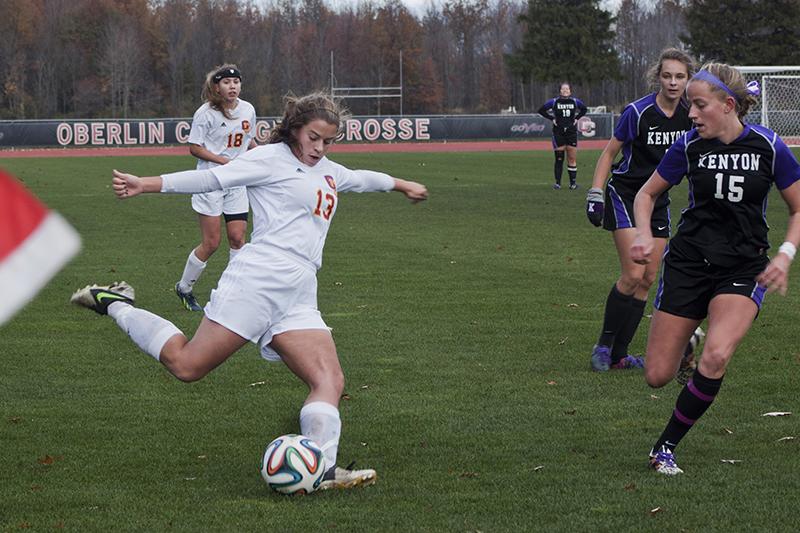 Sophomore Tyler Sloan kicks the ball in the team’s finale against the Kenyon College Ladies. The Yeowomen finished their season with a 10–8 record.

The women’s soccer team saw its season come to a close last Saturday, Nov. 1, when the Kenyon College Ladies came out on top with a 2–0 victory. The Yeowomen needed the win to secure a spot in the North Coast Athletic Conference playoffs but were ultimately unable to walk away with the berth. The Yeowomen concluded their season with an overall record of 10–8 and 3–5 in conference play, more than doubling the wins from the 2013 season.

In addition to beating Kenyon, the Yeowomen were banking on other NCAC results swinging their way. Denison University needed to defeat DePauw University and Allegheny College had to beat Wittenberg University. Both games played out in Oberlin’s favor, so the Yeowomen knew exactly what was on the line in their game. Saturday’s contest also fell on Oberlin’s Senior Day, which, according to senior forward Abby Weiss, added to the emotional atmosphere.

“Anytime you play Kenyon it’s an emotional day,” she said. “The fact that it was Senior Day and the last game of the season, along with the opportunity to make it to the NCAC, made it a really tough game but also really exciting. We were really pumped for this game, probably more pumped for this game than any other game this season.”

Saturday’s contest was not immune to external factors, with winds exceeding 20 miles per hour at Fred Shults Field. The Yeowomen started with the wind at their backs but were unable to take advantage of the opportunity and score. The Ladies also faced difficulties going against the breeze, and the first half concluded in a 0–0 stalemate.

“The wind was really intense,” said Weiss. “It’s such a huge advantage to have the wind at your back and it was really crucial that we got a few on the board that first half, but we were unsuccessful. If you watched the goal kicks or the punts against the wind, they really didn’t go anywhere.”

The second half provided the Ladies with the edge they needed as captain and NCAC leading goal scorer Becca Romaine capitalized on a give-and-go play at the top of the box in the 61st minute. However, the staggering blow for the Yeowomen came in the 77th minute when Romaine tucked away the game-winning goal, her 14th of the 2014 season.

In the second half alone, the Ladies outshot the Yeowomen 9–2, outshooting Oberlin 12–4 overall. Senior goalkeeper Kate Frost put forth a strong effort in her last career game and managed to keep Oberlin in the game with six saves.

In addition to the significant improvement from past seasons, the Yeowomen had the longest winning streak in history this year when they went nine straight games without losing. Among these notable triumphs were victories over longtime rivals Wittenberg and Baldwin Wallace University.

Before the game, Weiss, Frost and classmate Samantha Mater were honored for Senior Day. The three graduating members of the team were essential leaders for the Yeowomen this season, and sophomore forward Taylor French said the trio would be sorely missed next fall.

“My class has been playing with them for the last two years, and we’ve gotten really close, which allowed us to respect them as leaders, teammates and friends,” she said. “That mutual respect allowed them to really lead us effectively. We always played for each other, and that went both ways. We wanted them to go out with a good season.”

Just two years ago, the Yeowomen won only a single game. For the seniors, this season was an ideal parting gift after coming so far. Frost, reflecting on the team’s growth from her first to final year, said that the improvement was a result of increased intensity both on and off the field.

“I think the atmosphere at practice was a lot more intense than it’s been in my past three years. I think we all enjoyed being there and working hard for each other, which was really important,” she said. “[Head Coach Dan Palmer] did a really good job of working with what he had and pushing us to be better players. I think everybody improved this season.”

Palmer, who now has a 14–22 record at Oberlin after his second year, said that the program has made major strides and echoed Frost’s praise for the team.

“[The team] worked incredibly hard and really bought into the things that we asked them to do. The returning players made huge strides from where they were last year and we had some enthusiastic and talented freshmen that made big contributions as well,” he said. “The team chemistry was also very good. So it was the right set of circumstances that came together well for us, despite the injuries.”

The Yeowomen will look to add more talented incoming players in pursuit of an NCAC title to their already young roster.

“We are very young and enthusiastic,” said Palmer. “The future is bright.”