On the Record with Hinton Collection Curators 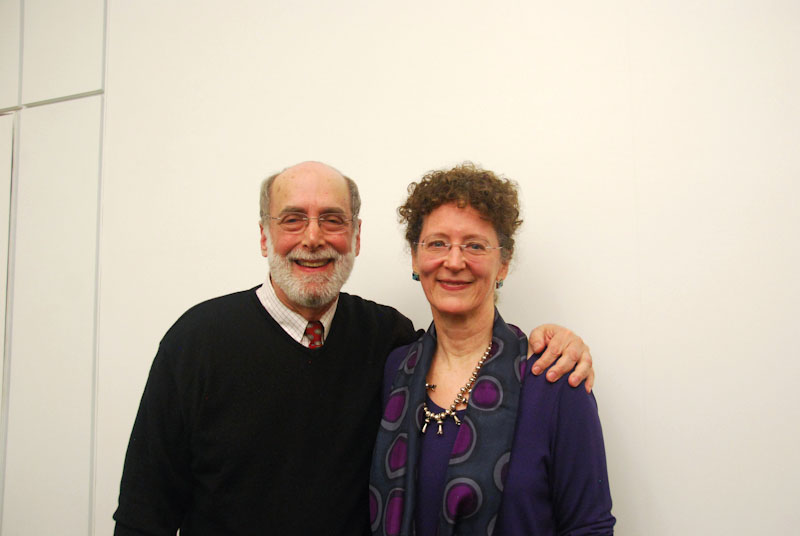 This week, David Berger and Holly Maxson, co-curators of the Milton J. and Mona C. Hinton Collection, visited Oberlin to discuss the current exhibit of legendary bassist and photographer Milt Hinton’s photography at the Allen Memorial Art Museum. Executors of Hinton’s estate also donated four of Hinton’s own basses along with a collection of the bassist’s papers, including everything from correspondence to memorable contracts. Berger, a lifelong friend of Hinton, collaborated on the artist’s award-winning biographical work, Bass Line: The Stories and Photographs of Milt Hinton. Maxson helped to edit and sequence the photographs for the book. Together, the two sat down with the Review to discuss their relationship with Hinton and his photographs.

How did you both get involved with the work of Milt Hinton? More specifically, how did your professional interests lead you to his work?

David Berger: I grew up

in Queens, NY, and I met Milt in … let’s call it 1955. I was playing bass violin as a high school freshman, and I became interested in jazz bass. I had seen a film called High Society and … Louis Armstrong’s band was in the film. I thought his bass player Arvelle Shaw was terrific, so I got his number … and called him on the phone to ask if he would teach me. And he said, “Nope, I’m too busy, but why don’t you call Milt Hinton?”

Milt Hinton was working in the studios as a freelance musician and in radio and television orchestras. He started teaching me bass, and after about four or five months of my going out there, we talked about it and he said, “I don’t think this is going so well.” And I agreed. He then said, “Why don’t you just come out and hang out here? Let’s just forget about the lessons.” I hung out with him for the next … How long, Holly?”

Holly Maxson: Until his death in 2000, so I’d say about 45 years. DB: The photographs all come about because when … I was about 15 or 16 years old, I saw this pile of contact sheets in his basement. These were not finished photographs or enlarged photographs, but they were contact sheets, hundreds of them with all of these little, tiny images. I started asking questions about the photographs. There were pictures of people that I had known all about. I saw photographs of Dizzy Gillespie, Billie Holiday, Ben Webster, and I just became fascinated with them. I was also intrigued by the composition of them. So I started writing on the backs of [the contact sheets] who was where in the images. I would ask, “Who was this, Milt?” and he would tell me. Eventually, I did my undergraduate degree in sociology and got a Ph.D. in sociology because I wanted to combine my interest with music with my interest in sociology. Very few people did this at the time, and this all started for me with Milt.

HM: [In 1978,] I got a call from David and he said, “I’m working on this project and we want you to do some printing,” and I went and picked up all of the contact sheets and took them to my darkroom in my apartment and started to work. Essentially it was just chaos, some of the negatives had gotten damaged in a flood in Milt’s basement and they were all scattered and nobody had really numbered them. There was no organization at all. There were about 45,000 negatives. But I created a card catalog that I knew would help David and Milt find the pictures that they wanted to use to illustrate this story.

What is one of the most unique parts of Milt Hinton’s photographs?

DB: What makes it kind of an unusual story is that here is a guy who is … part of the scene. He was shooting away like crazy! And he’s shooting his friends! He’s not an outsider; he’s not a photojournalist. He’s one of the

guys. This is a world-class jazz bass player who’s got entrée into this world.

HM: To paraphrase a quote from the documentary, these musicians aren’t looking at the camera, they’re looking at Milt. He came from such an impoverished background in the South that for a black man to have achieved his status was just the most wonderfully miraculous thing. He was always looking toward realizing positive forward movement for his people.

DB: He would also be the first one to say, “I’m not a professional photographer. I got myself good equipment, and I happened to be at the right place at the right time.”

How did Hinton depict his experience as an upper-middleclass black man during that time period?

HM: Milt really had a commitment to wanting to show people the way in which he lived and the world in which he lived. I also think he was very conscious of trying to show [his experience of ] advances in his community, the positive changes that were taking place.

DB: He wanted all of this stuff to be shared and he wanted future generations to see how he’d experienced [it], but also wanted to show people the kinds of circumstances that they were facing in context, like when they toured the South, and his experience of segregation.

Why did you choose Oberlin for this collection to be located?

DB: Milt Hinton spent a lot of his teenage years in Sandusky, Ohio. Milt had a private violin teacher, James Johnson, who told Milt that he went to Oberlin. Milt never forgot that, and I think part of Milt was sort of astounded that an AfricanAmerican man could have gone to Oberlin that early. We knew that Oberlin had both a worldclass liberal arts college and a world-class conservatory. There are not many places like it.