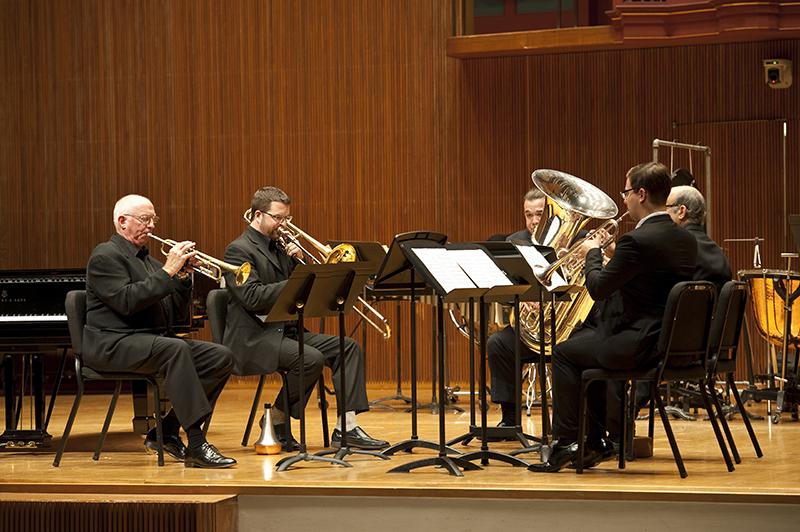 The Brass, Piano and Percussion departments combined forces this Sunday to present a quirky program of 20th-century music. This installment of the Faculty Chamber Series took place in Warner Concert Hall and included performances of music by Lutosławski, Gershwin and Bartók.

The first piece on the program, Lutosławski’s “Mini Overture” for brass quintet proved to be an exciting gambit. The ensemble performed the piece’s complex rhythmic figurations admirably, with only the occasional cracked note to remind the audience that even teachers can make mistakes. From the rousing opening fanfare, the players demonstrated precise intonation and presented the composer’s high trumpet riffs and intricate harmonic textures clearly. The performance came to a climax when the whole ensemble performed in perfectly articulated unison for a particularly exciting musical moment.

Staying within the 20th century, faculty pianists Robert Shannon, OC ’71, and Haewon Song performed the Fantasy on Porgy and Bess for two pianos, as arranged by Percy Grainger. Even the most difficult passages in Grainger’s elaborate transcription rang out clearly and precisely through Warner Hall. From the powerful opening chords to the more tender quotes

from Gershwin’s popular opera, Song and Shannon performed the arrangement with energy and passion.

Many of Béla Bartók’s trademark Hungarian rhythmic figurations are present in his Sonata for Two Pianos and Percussion. The sonata has three movements; the first begins with a slow tempo in the lowest registers of the piano and timpani. As the music begins to ascend the range of the piano, the slower tempo is sharply interrupted by flashes of energetic, quick passages in the percussion lines. The often-dissonant harmonic structure excellently contrasted Gershwin’s more consonant melodies. From beginning to end, Yury Shadrin, OC ’06, and Professor of Piano Monique Duphil displayed immaculate collaboration. Despite facing away from each other, the two played with confidence and accuracy in even the most complicated of passages. Professor of Percussion Michael Rosen and percussionist Christopher Cabrera, Conservatory senior, excellently supported the unrelenting melodic discussion between the two pianos. Rosen displayed a relaxed nonchalance even throughout the most difficult sections.

The second movement also began slowly, but this time with a percussion solo, which was soon answered with punctuated jabs from the pianists. Even as the texture slowly thickened, the music retained a very placid feel. The occasional sharp interjections in the piano parts eventually transformed the movement with a lighter, more animated tempo. The performers presented a seamlessly unified interpretation of the jazzier sextuplet motif that was passed from musician to musician before relaxing once more into the tranquility of the return of the opening material.

A bright flourish followed by skillfully executed virtuosic lines in the piano parts opened the final movement. The pianists, supported by driving pulses from the percussion, were accented with strong offbeats, giving the music a rhythmic zest. Shadrin and Duphil maintained flawless synchronization throughout the most hectic of passages, and all four players perfectly captured Bartók’s gentle fadeout as if the musicians were slowly walking off into the distance. This movement was the crowning moment to a concert of many musically thrilling moments and rounded out the night with a sense of relaxed introspection.