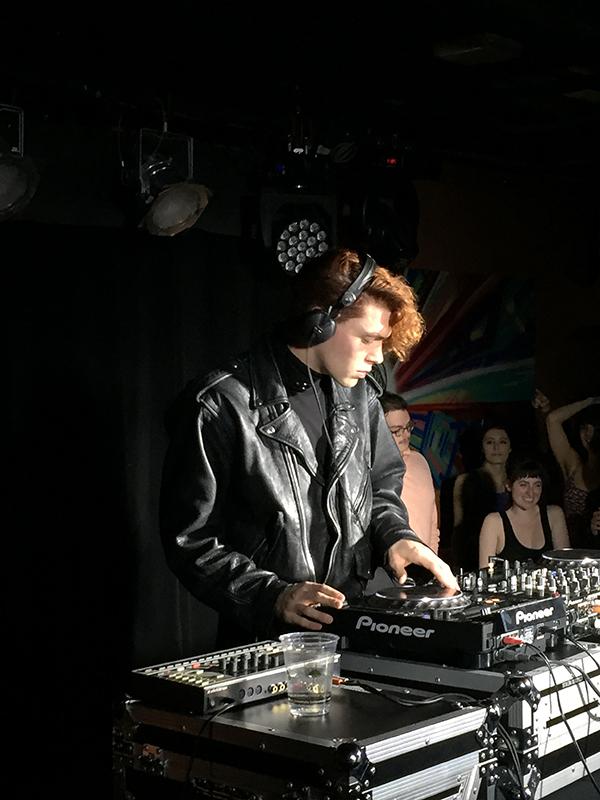 Three spotlights illuminated the ’Sco stage Friday evening as British music producer and electronic musician SOPHIE performed to a vibrant crowd. SOPHIE’s stage was equipped with a single table and three mixing pads, yet the simplicity of the scene was hardly a reflection of the audience’s wild reaction to his performance. In the ’Sco vicinity, already full of assorted chatter, singing and dancing, the mass of people chanting “SOPHIE” illustrated the level of excitement among the crowd.

SOPHIE took the stage in a black leather jacket and black pants. A mop of bright red curly hair bounced up and down over his eyes as his head bobbed to an escalating beat.

Lights of blue, purple, red and white flashed in line with the music, temporarily illuminating SOPHIE as well as the audience. Like a series of pictures, glimpses of SOPHIE cut through the dark room.

The audience was restless. Waves of audience members crashed over the stage then jumping back into the crowd. Drenched in sweat, people jumped up and down, moving where the crowd permitted them to move.

With most new music, one can generally relate one band’s sound to that of other bands pretty quickly. Originality is tough to find — songs blend together and bands often have similar sounds. This is not the case with SOPHIE.

If there’s one thing SOPHIE is, he’s certainly original. His songs are created from layered sounds. Each sound churns through fun, poppy music that is unlike most other electronic music. SOPHIE’s songs don’t sample other work; there is no base melody or riff that the rest of the song is then built from. From scratch, SOPHIE creates a world of sound that is pretty fun.

A SOPHIE song does not have a distinguishable drop, but instead starts by firing on all cylinders. Since the drop isn’t part of his music, SOPHIE needs alternative methods by which to divide a song to avoid excessive repetition of a beat that doesn’t change. He accomplishes this by incorporating either isolating pieces of a longer track or overlapping different parts of a track to add texture.

While his songs don’t drop like other electronic music, SOPHIE teases at drops through his songs. His songs ascend or descend in the same way a Skrillex or Carnage song might, except when the song approaches something like a climax, it doesn’t change, but rather continues with new variation. By doing this, SOPHIE fosters anticipation from the crowd.

Electronic music is a genre often dominated by almost identical songs. With such a strict format, it’s not surprising that songs sound similar. Without many lyrics, song writing isn’t available as a distinguishable factor for electronica. This is why SOPHIE’s style is refreshing. He separates himself by breaking from the mold adhered to by most electronic musicians.

While SOPHIE’s music may not be what electronic music fans are accustomed to, it is still pleasing to audiences and is conducive to dancing. Though his act could fit right in among the DJ stages of major music festivals like Coachella and Lollapalooza, he could improve his stage presence.

There was a dreadful lack of communication between performer and audience. SOPHIE came onstage, played his music and left. If he were to at least say hello and acknowledge that he was playing to Oberlin and not, say, the Queen of England, his performance would improve significantly. Though he did perform his songs live, he could have played his set from an iPod and the audience would not have been able to tell the difference.

Overall, SOPHIE’s performance was enjoyable, though. The stage lighting was stimulating and complimented his upbeat sound. If he becomes less reserved on stage and continues to produce and perform, SOPHIE could certainly become a powerhouse in electronica.