In the Locker Room with Kerry Jenkins and Isaiah Cavaco 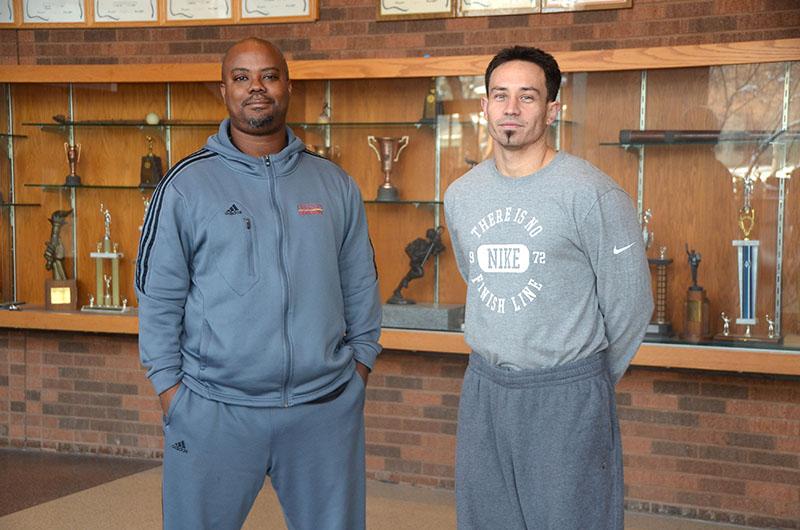 How has the season gone thus far?

Kerry Jenkins: I think well. We have good chemistry; we’re working really hard. We’re young, so we’re trying to solidify certain positions and trying to get better in certain areas, but so far I would say I’m pleased with the progress.

Isaiah Cavaco: Ours is going well. We have a physically small group, so we’ve been a little bit creative with the way we play, and the guys are buying into it. Early in the year, to have a little success obviously helps [the players] with their belief.

Talk about your own college playing careers.

KJ: I was actually a football player in college. I think that influences how I coach my players. I think of the game in pieces in the way that a football coach would, breaking things down to individual plays. There were also times in my career when I felt that if I had better coaching, I would have been a better individual player. If I see something good in a player, I try to develop that. My own experience really influenced my approach to coaching.

IC: I had a good time. I had two different college coaches; there was a coaching change halfway through my career. I had a bunch of knee surgeries my junior year, and that’s when I started looking at the coaching aspect of basketball — while I was sitting out. I started seeing the game from a different perspective, and that’s kind of how I got here.

How have you changed as a coach since coming to Oberlin?

KJ: There’s an infinite amount of answers to that question, and it’s hard to pinpoint any one specific area. Isaiah and I talk about it all the time — you just try to get better everywhere: better communication, better X’s and O’s, better organization, better teacher and better relationships with players. It’s all about incremental steps.

IC: I think you just have to trust your instincts here. You can come in and lay out all four months’ worth of how this process should go in your mind, and then by day one you blow that up and just improvise. As a young coach, when I first got here, it had to be a certain way, and now I come in with a lot more of an open mind every season.

How has Oberlin changed since you came here?

KJ: We’re getting bigger, stronger, faster, more athletic, smarter and more dedicated. There’s been an evolution. The athletes now that we have on the team fit Oberlin really well but might not be considered the classic Obies. I think we’ve both figured out how to recruit kids that will excel at Oberlin.

IC: There’s a greater sense of pride in the athletes now. Because Oberlin is such a good academic school, sometimes they shied away from being proud of what they did extracurricularly, especially athletics. The group is very tight-knit, whereas before they came here as individuals, and they individually played a team sport.

How would you describe your style of coaching?

KJ: I consider myself a players’ coach. That doesn’t necessarily mean I let the inmates run the asylum, but at the same time, every decision that I make, I consider their perspective, their needs and what they’re going through first.

IC: Outside the box, unorthodox, crazy. Even our style of actual play is actually different than most of the teams that we play. You take what you have, and you mold to the player instead of making them mold to what you want to do.

How does the season and the team’s preparation change over Winter Term?

KJ: You get to focus a little more individually over Winter Term. You have a lot of time to work with the players, and you can prepare a little better; you can kind of just put your emphasis on making them better players and getting ready for each game. You also have to spend a lot of time entertaining over Winter Term. I can’t emphasize enough how much time there is to kill. We also say it’s the best part, though. I love Winter Term as a basketball coach, and I think the players love it too.

IC: Winter Term is more about developing habits. You get to do some individual skill work, but you’re also giving guys stuff to take home for the summer.

Have you started recruiting for next season?

KJ: That’s 80 percent of what we do. It never stops until Admissions absolutely sets a deadline and tells us we can’t get any more applications in. Then, we stop for the current year and go for the next year.

How do you sell recruits on Oberlin?

KJ: We don’t. We present Oberlin, we don’t sell it at all. It’s become way more efficient for me because I’ve stopped trying to sell it and just let the campus and community promote itself.

IC: Everything here is acceptable. Anything that you’ve ever wanted to try or become is possible during this four-year window. This is a great place to do that, and along the way you get to do what you love and play basketball.