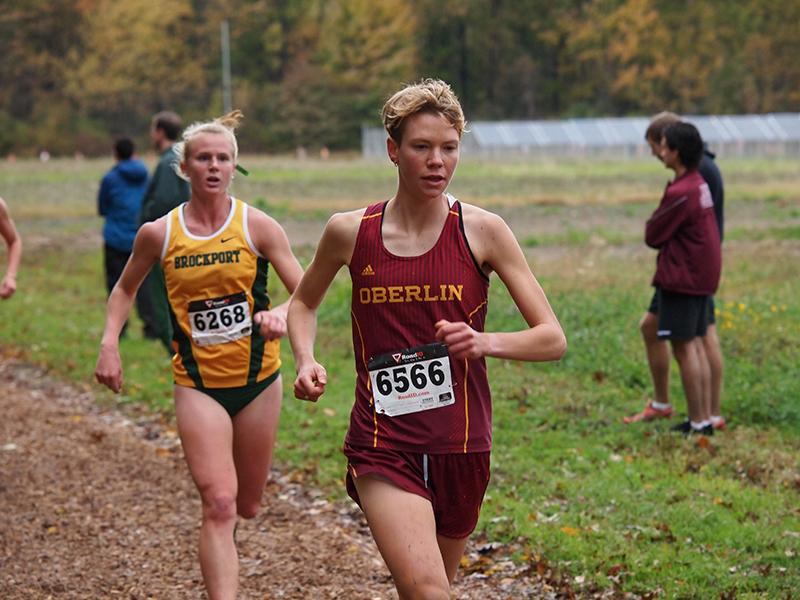 Senior Kyle Neal races past a Brockport University runner at the Inter-Regional Rumble on Oct. 18. The top seven Yeowomen runners and juniors Geno Arthur and Joshua Urso will represent Oberlin in the NCAA championship this Saturday.

The women’s cross country team placed second in the 2014 NCAA Great Lakes Regional race last Saturday, Nov. 15, earning them a bid to the NCAA Championships for the sixth consecutive year.

The Yeomen will also send juniors Geno Arthur and Joshua Urso to the championship after the duo finished in third and thirteenth place respectively in the regional competition. The men’s team placed eleventh overall, disqualifying the rest of the Yeomen from racing in the championship. Wilmington College will host the national race this Saturday, Nov. 22.

Head Coach Ray Appenheimer, who was recently honored as the North Coast Athletic Conference Coach of the Year, said that this year’s results were in line with his high hopes for the season.

“Our expectation the whole year was that this year was going to end at the National Championships,” said Appenheimer.

Senior Emma Lehmann led the team with a second-place finish in the 6K race with a time of 21 minutes, 23.5 seconds. Classmate Kyle Neal trailed closely behind, crossing the finish line third at 21:31.4.

Lehmann maintained her regional runner-up status from last year while Neal jumped two places from her previous season’s results, moving from fifth to third. Senior Sarah Jane Kerwin also improved upon her results from last year, jumping 20 places into seventh place with a time of 21:57.5.

“Our five seniors, our top five runners, understand the emotional energy it takes for the entire year to get to this point,” said Appenheimer.

On the men’s side, Arthur and Urso represented Oberlin well in the 8K race, securing two top-15 positions for the team with 24:29.3 and 24:50.8 finishes respectively. Both runners earned All-Region honors, marking a second-time achievement for Arthur and a first for Urso.

“It’s gratifying to see Geno [Arthur] and Josh [Urso] perform at such a high level so consistently,” said Appenheimer.

Although Arthur and Urso couldn’t bring their team with them to Nationals this year, Urso has noted a significant improvement in the team’s mentality.

“I’ve seen our team improve in taking ourselves a little more seriously and not being afraid of taking chances during races,” he said.

Urso added that even in the last year, the men’s team has developed more confidence.

“My class came in with a lot of potential, and we’ve improved as runners each year and really grew together as a team,” said Neal.

Appenheimer said that the Yeowomen’s seniors have set an excellent example for the team’s next generation of runners.

“They’re wonderful women. They’re the perfect kind of people to be doing this,” said Appenheimer. “These women train their butts off, and they’re community-minded people.”

Despite all of Lehmann’s individual accolades, she attributed much of the team’s success to its teamwork and support system. Neal echoed this sentiment and commented on the team’s constructive dynamic.

“The team is a close group and everyone wants to see everyone else do well,” said Neal. “We push each other to succeed.”

The Yeowomen, accompanied by Urso and Arthur, head to Nationals this weekend for the final showdown. Oberlin is providing transportation for the first 55 fans to sign up to cheer on the cross country team at the race. Supporters can sign up on the Oberlin College Athletics web site for the free ride, which will depart from Philips gym at 7 a.m. on Saturday, Nov. 22.