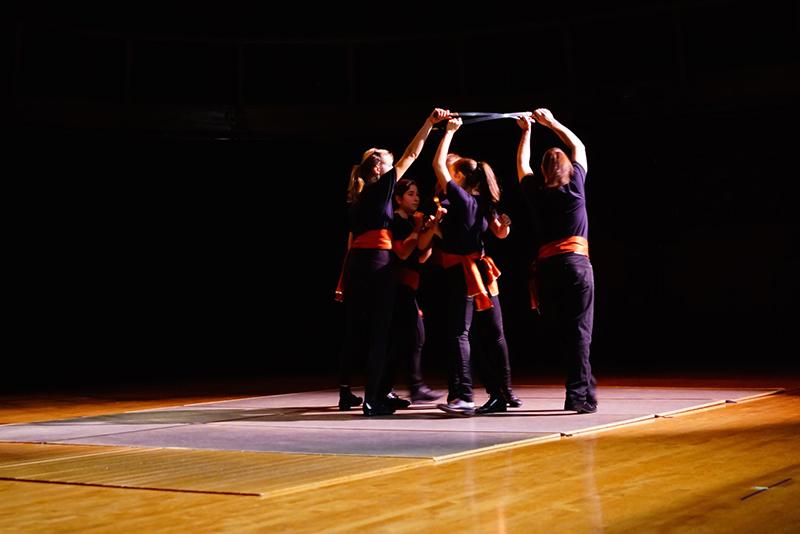 Rapper sword dancers perform during the Student Dance Showcase in a jam-packed lineup of diverse perfor- mances. Founded by Hayley Larson, OC ’14, in 2012, the showcase has made a vast assortment of dance forms accessible to choreographers, dancers and audiences.

Though the Student Dance Showcase is only two years old, the free dance show held each semester in Warner Main already feels like a fundamental part of the department’s annual listing of events. With the addition of the showcase, the department began a student-run plan in making a more inclusive range of dance accessible to a wider audience.

This year’s event, which took place last Friday and Saturday evenings was exactly what Hayley Larson, OC ’14, envisioned when she first started the Student Dance Showcase during her sophomore year. Now working at the Allen Art Museum full-time, Larson, a former Dance and Chemistry major and Art History minor, has continued to assist the current leaders of the showcase.

When Larson auditioned as a first-year for the Dance department’s annual Spring Back show and was not accepted, the only remaining option to perform her piece was to include it in the lineup for what Larson describes as “the spring reject show” in which she would have been the only performer. Even worse than the spring reject show’s title — “Sprung” — is that the fall version of the show was titled “Fell,” a name that was not exactly encouraging to dancers hoping to continue in their choreographic pursuits.

“[Fall Forward and Spring Back] don’t leave a lot of space for students to really be creative with work,” Larson said, “I wanted a space to show things that I wasn’t sure were going to work.” She went on to explain that in order to gain acceptance into one of the two dance shows, choreographers are required to have their pieces approved by a dance faculty member and supported by other dancers.

Long fed up with the department’s lack of inclusion, Larson made a daring move. In an act of defiance, during her audition for Fall Forward in 2011, Larson walked onto the stage and ate a piece of paper in an attempt to push the boundaries inherent in the dance audition process. “To my surprise, it actually got into the show,” she said. “I decided that if [Fell and Sprung] weren’t gonna happen, then why not start another show?”

Daniel James, the technical coordinator of Warner Center in charge of lighting design and stage-managing shows at Oberlin, helped train Larson to run the Showcase, which is funded by the organization Dance Umbrella. Larson managed much of the production of the first Showcase herself. Now run by College senior Silvia Sheffield, who has assisted the show for four semesters, and College junior Alana Reibstein, who joined this fall, the showcase is equipped with a production crew so that the directors don’t have to handle multiple jobs at one time. “Being a director for this show is a really unique thing because you are not just directing, but publicizing, stage managing, etc.,” said Reibstein. “Creating institutional memory is a whole other challenge and requires patience, organization and devotion.”

This year’s show had 21 pieces compared to the 15 they had in the past; the show reached full capacity, requiring the directors to set up full bleachers in Warner. “I don’t know what we would do if it grew much bigger than this semester,” Sheffield said. “I … really love how much energy the audience-performer relationship can create, and how that can really fill the space and leave people feeling differently from when they walked in.”

The showcase included a variety of non-contemporary dance pieces that arose out of dance programs, like ViBE Jazz and Tap, as well as “just for fun” pieces. “I love how totally varied and diverse this show is,” Reibstein said. “It forces the audience to locate themselves in a new world every several minutes.” This year’s lineup featured performances by the Umoja Steppers, an extravagantly impressive hip-hop number and even a rapper sword dance. Other performances include work by Ballet Oberlin, KOREO and Movimiento. Larson, who plans on going to a four-year circus intensive program after leaving Oberlin in May, performed an aerial act onstage at the showcase for the first time since her senior show last spring.  This was Sheffield’s last semester co-directing the showcase, as she is beginning to prepare for her senior show in the spring. College sophomore Leah Newman, who performed an experimental piece in the showcase, will replace Sheffield alongside Reibstein this spring.

Despite their dedication to the Student Dance Showcase, all of its directors have performed in Fall Forward and Spring Back and consider these events to be a crucial aspect of the Oberlin Dance department, along with Dance Diaspora and the Essence Dance Concert, both organized by Artist-in-Residence Adenike Sharpley. “I think it is vital to the dance community here that there is more than one show a semester that goes up in Warner Main and that they have different goals and represent different things,” Reibstein said.