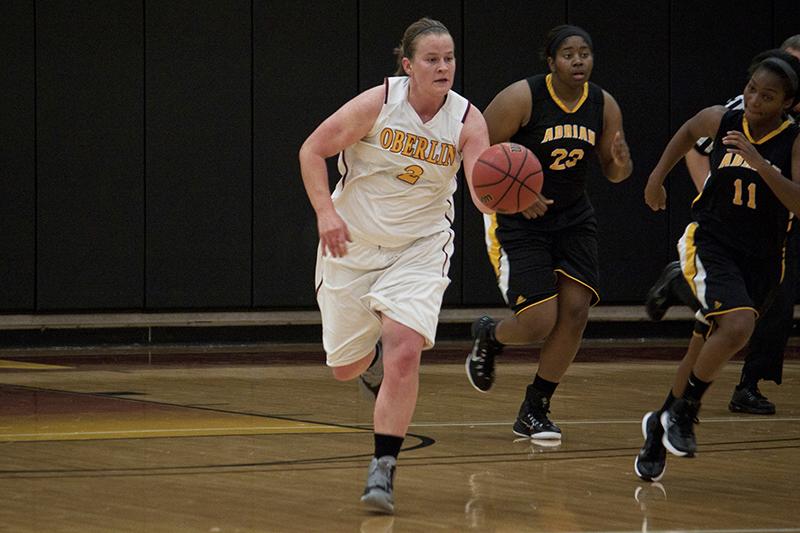 Senior Christina Marquette dribbles down the court past a defender from the opposing Adrian College Bulldogs at home on Wednesday, Nov. 19. The Yeowomen have an overall record of 3–3 this season.

The women’s basketball team defeated the Thiel College Tomcats at home by a score of 74–46 on Monday, Nov. 24. Senior Christina Marquette and junior Lindsey Bernhardt led the team with a combined 44 points.

The win pushed the Yeowomen’s record to 3–2 and helped them bounce back from their 63–43 loss to the Trine University Thunder on Saturday, Nov. 22.

The Yeowomen started slow against the Tomcats, scoring just seven points in the game’s first seven and a half minutes, but they put their foot on the gas pedal to close out the half, scoring 24 more points to take a 31–18 lead.

Despite the decisive win, Marquette noted that the team was unhappy with its offensive performance. Still, the Yeowomen’s stifling defense allowed the team to correct its issues on offense early in the game.

“We executed really well defensively. It wasn’t our best offensive game. We only let them score 18 points in the first half, which is pretty solid defense,” she said.

The second half opened with more lackluster play from the Yeowomen as they allowed the Tomcats to cut their lead to 10 in the first 15 minutes. However, from there on out, the Yeowomen dominated, outscoring Thiel by 18 in the game’s final minutes. Marquette led the attack, scoring 17 of her 24 points in the second half.

The high scoring outputs of Marquette and Bernhardt stole the spotlight, but it was the bench of Yeowomen that gave them a great advantage over the Tomcats. First-year forward Anna Moore led the bench effort, scoring 11 points and grabbing six rebounds in the second half. In total, the Yeowomen’s bench outscored that of the Tomcats 19–13.

Though the Tomcats hung tough, the Yeowomen were able to hold onto their double-digit lead for the majority of the game, thanks to superior execution from every member of the team.

“We did what we were supposed to do on every play,” Marquette said. “We didn’t take breaks or let little runs on [Thiel’s] part get us down. We stuck with our team’s philosophy the whole game and beat them.”

Head Coach Kerry Jenkins agreed, noting that the team stayed within itself and carried out its strategy effectively.

“The players did a great job of implementing the game plan and sticking to it,” he said. “There was a big jump in execution. We are gradually improving game by game. It was encouraging to see us get better in our overall defensive and offensive execution.”

The team’s strong defense was reflected on the score sheet, as the Yeowomen racked up a season-high 18 steals and five blocks during the game. Marquette again led the way with six steals and a block.

Not allowing themselves to be distracted by the big win, the Yeowomen quickly shifted their focus to their first conference game of the season against the Denison University Big Red on Wednesday.

“Denison has a really good post player — the leader in the nation in blocks and rebounds in Division III basketball — and so what we are going to do is force them to get all of their offense from her and take all their other players out of the game,” said Jenkins. “We’re going to play tough post defense, make her run the floor, get her tired and just wear her down as the game goes on.”

Despite the pre-game focus and preparation, the Yeowomen failed to contain Big Red sophomore center Jordan Holmes as she scored 18 points to go along with 18 rebounds and five blocks, leading Denison to a 72–48 win. A failure by the Yeowomen to execute their game plan also allowed two other Big Red players to score double digit points. Bernhardt was a bright spot for the team once again, scoring a season-high 25 points to give her over half of the team’s total output.

Next, the Yeowomen head to Youngstown, Ohio to take on the Youngstown State University Penguins on Saturday, Dec. 6 at 2 p.m.