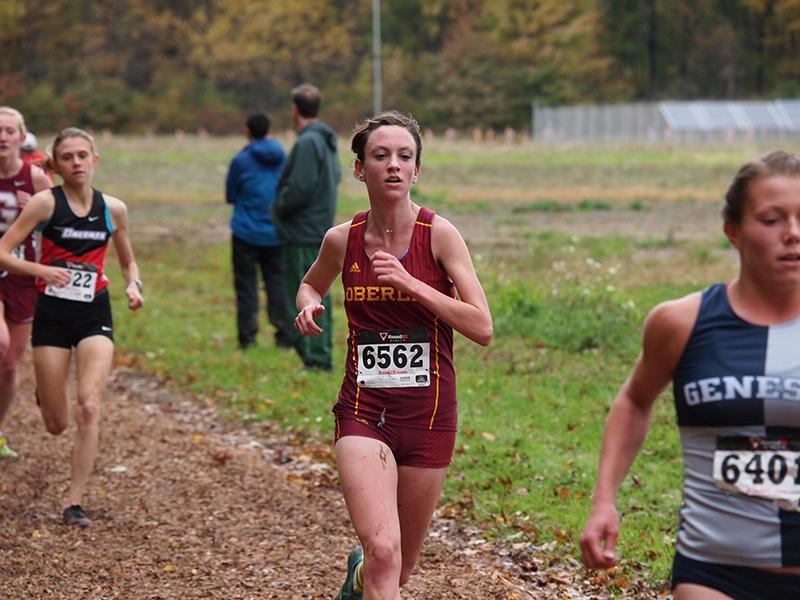 Senior Emma Lehmann outkicks their opponents at a race earlier this season. Lehmann earned an All-American title for their 9th place finish in the 2014 NCAA Nationals last Saturday.

The women’s cross country team, accompanied by Yeomen Geno Arthur and Josh Urso, both juniors, concluded its historic season at the 2014 NCAA Championship on Saturday, Nov. 22, placing seventh in the nation.

Seniors Emma Lehmann and Kyle Neal were trailblazers in the women’s race, finishing in times of 21 minutes, 55.9 seconds and 22:7.8 to take ninth and 14th places respectively. Unfavorable weather, however, tore up the winding course, making the race all the more difficult for the runners.

“It’s just such a different race than any other just because of the size, not just of the field, but also the spectators — it’s just so many people,” said Neal. “On Saturday, it was super slippery so the conditions were really bad. It was a lot of having to focus on not completely wiping out when you run around turns. It’s an odd course because it’s kind of like a maze.”

Neal climbed the ranks to improve upon her 28th-place finish in 2013 to 14th place this season. Lehmann also made strides in their final competition for Oberlin, moving from 11th to 9th place in the 2014 competition. Neal and Lehmann’s fast finishes earned them All-American honors for the second year in a row. Head Coach Ray Appenheimer applauded the senior duo for their tenacity during trying conditions.

“It’s the kind of race where everyone is fit,” said Appenheimer. “These are the best teams and the best runners in the nation, and it always comes down to who handles that moment the best. Having a group of women there who have been there four years in a row gave a tremendous advantage, and I think it showed up on that day.”

Senior classmates Sarah Jane Kerwin, Carey Lyons and Erica Morelli also made the trip to Mason, Ohio for the race. Coming in a little over 30 seconds behind Neal, Kerwin just missed the cut for All-American honors with a time of 22:41.9, earning her 46th place.

“Emma’s race was just tremendous,” said Appenheimer. “Sarah Jane was so close to All-American. Carey, who fell during the race, which would destroy so many runners psychologically, got up and went on and passed about 100 people in the last mile or two of the race. I’m just so proud of all of them.”

Lehmann, a four-time veteran of the Division III NCAA championship race, said this competition bore similarities to years past.

“It was pretty similar to last year’s race,” they said. “I kind of just tried to stay with the front few girls — I don’t know why but I always get stranded by myself in some place where there is no one anywhere around me, and that happened again this year. Overall, it went pretty well I think.”

Meanwhile, just hours before the Yeowomen hit the course, Geno Arthur and Josh Urso competed for the Yeomen. Arthur jumped more than 90 places when he finished at 19th place in the 2014 competition, compared to last year’s finish at the 111th spot.

Arthur’s time of 24:29.22 in the 8K race makes him one of only three male runners in school history to place in the top 20 at a NCAA national competition. He also earned All-American honors for his efforts. Urso, just 30 seconds behind Arthur with a time of 25:3.24, crossed the finish line in 64th place. He also improved from last year’s competition, in which he placed 139th.

“It wasn’t a fluke that I made it last year,” said Urso. “I do deserve to be [at nationals]. I performed really well there, and I can continue that. I just have to keep that mindset going into next track season. If I place that well in cross country, I can do that well in track as well.”

While Appenheimer, concluding his 11th year as head cross country coach, said he is incredibly proud of the group, he also already has his sights set on the upcoming track season and continuing to build his program.

“The great thing about this job is there’s always a meet coming up,” he said. “We’ve got lots to look forward to with this group.”