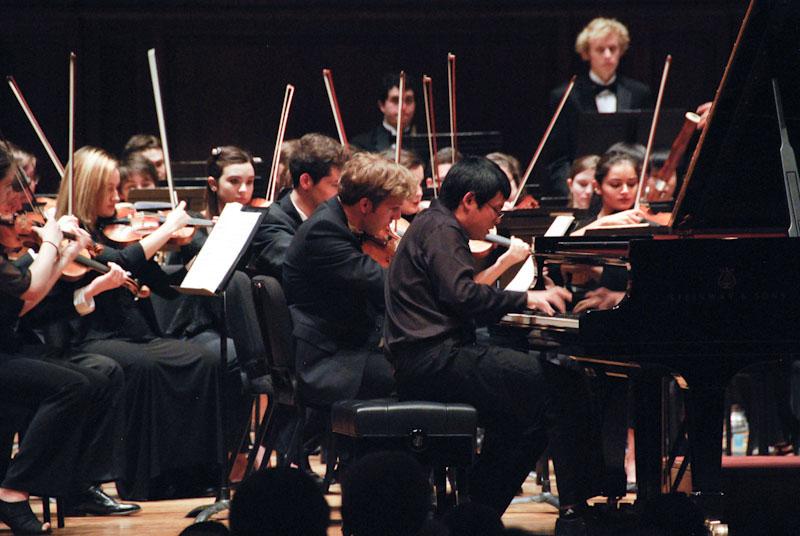 The Oberlin Orchestra does not recycle repertoire. In an effort to expose students to a broad array of music, Raphael Jiménez, director of the Oberlin Orchestras, has yet to program any piece more than once for either of the ensembles he directs. For the second time in his four-year tenure, however Jiménez stepped up to the podium Friday night to conduct the Oberlin Orchestra in a performance of George Gershwin’s crowd-pleasing Rhapsody in Blue in Finney Chapel.

Not only has the orchestra played this music before, but frequent concertgoers will recall that the first performance of the semester featured the same rhapsody as interpreted by Professor of Piano Sanford Margolis. Last week’s concert spotlighted Thailand native and Conservatory senior San Jittakarn, one of four winners of October’s annual Senior Concerto Competition.

A highly decorated pianist, Jittakarn commanded the keyboard with an adroit mastery, first taking his time with the piece’s familiar melodies before racing through the more technical passages with an intrepid gusto. Each phrase was carefully and beautifully crafted, full of dynamic contrasts and a nuanced approach to timing. Gershwin meticulously notated each of the piano cadenzas, but traditionally, there is great discrepancy between performances. While engaging and varied — and performed nigh flawlessly — Jittakarn’s slightly over-polished interpretation was entertaining but felt vaguely contrived.

The same cannot be said for the orchestra, who seemed to relish the opportunity for a second crack at this renowned American work. From the raunchy opening glissando in the clarinet to the powerful brass fanfares, instrumental soloists and ensemble members alike displayed a strong commitment to ebullience. The slower middle section allowed both the orchestra and Jittikarn to relax and demonstrate a more soulful character, stretching each phrase with an almost loving tenderness.

In the piano cadenza preceding the finale, Jittakarn’s hands blurred over the keys before the brass initiated a slow crescendo that stretched to the very end of the piece. During this final section, Jittakarn’s playing lost some of its sophistication but gained an exhilarating sense of abandon that brought the audience leaping to their feet even before the final chord had finished resounding.

After intermission, Jiménez led the orchestra through a performance of Sergei Rachmaninoff’s Symphony No. 2 in E minor. Beginning with the ominous first scales in the low strings, the orchestra captured the composer’s thick, dark soundscape through their coordinated and emotive playing. The ensemble blended excellently, both as individual sections and as a cohesive group.

The second movement features the horn in a strident opening melody, admirably and energetically performed by double-degree fifth-year Kevin Grasel. A stark contrast between this first theme and the slower, more lyrical trio makes this music sound like two distinct movements in one, but the orchestra dexterously switched character to accommodate the rapid musical variation.

During the third movement, Conservatory junior Ryan Toher performed one of the more famous clarinet excerpts in the standard repertoire with a sweetly singing quality. The balance here, however, did not favor Toher’s hushed, smooth tone. The strings’ sound threatened to overpower the clarinet, and though Toher was clearly audible, the movement could have benefited from a softer string dynamic.

The final movement’s passion was tinged by the fatigue of musicians onstage. Rachmaninoff’s symphony is particularly long, with performances typically running for about an hour. The sharp dynamic contrasts were strikingly executed, but the rhythmic energy lacked the sparkling clarity of the orchestra’s earlier playing. Even so, the musicians rallied for the finale, and the ensemble delivered the final phrases, strongly reminiscent of the composer’s Piano Concerto No. 3 in D minor, with a thundering rigor. During Jiménez’s first curtain call, the conductor made his way to the back of the orchestra to emphatically shake Toher’s hand before acknowledging other soloists and the concertmaster, Conservatory senior William Overcash.

While the Gershwin and Rachmaninoff both provided opportunities for the orchestra to feature both individual members and its coordination as an entity, the best ensemble playing undoubtedly lay in the first piece on the program, Antonín Dvorák’s “Carnival” overture. Here, the percussion section set a rock-steady pulse atop which the violins performed Dvorak’s complex technical figurations with confident stability. Though the brass may have been a bit loud at the very opening of the music, the exciting beginning set a jubilant atmosphere for the rest of the piece.

As in Rhapsody in Blue, the gentler middle section allowed for a more delicate sense of expression. After a timid beginning, English horn player and Conservatory sophomore Casey Kearney exhibited a beautifully rich timbre and a warm style that introduced a chorale-like woodwind passage. The wind section performed with excellent intonation.

Having memorized the score and so unencumbered by page turns, Jiménez danced across his podium as he led the orchestra through Dvorak’s sudden tempo changes with a firm and intelligible hand; the ensemble performed the sporadic shifts in speed with superior sophistication. The musicians played the rousing finale with tasteful measures of zest and restraint, successfully conveying the ecstatic atmosphere of Dvorák’s “Carnival” without losing control of the speed or volume. The maturity demonstrated by the performers during this concert belies their age, and, despite the length of the program, the orchestra maintained a delightful polish throughout the evening.