Unusual Crowd Turns Out for Machinedrum 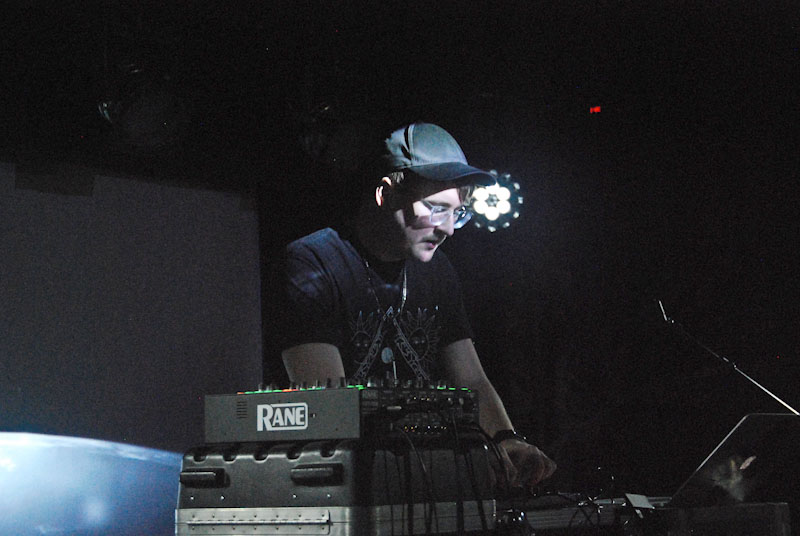 Electronic musical talent Travis Stewart, also known as Machinedrum, uses a soundboard to produce a pulsating tempo. While the South Carolina native appeared excited to perform for Oberlin students Wednesday evening, the ’Sco crowd seemed to be longing instead for a final Splitchers.

A surprisingly elderly crowd equipped with e-cigs and beat-up jean jackets casually awaited Travis Stewart’s ’Sco appearance, most with a brew in hand. The 32-year-old electronic music producer, known as Machinedrum, arrived in Oberlin last Wednesday night and immediately deemed the town of Oberlin “cute” to his 40,000 Twitter followers. Machinedrum’s ’Sco debut apparently marked the North Carolina native’s first trip to Ohio. Nonetheless, he did not seem out of place with his ragtag look, marked by a sleazy ’stache, bulky glasses and a trucker hat.

The night began as College seniors Jay Rosen and Joseph Magee took turns amplifying their mixes to a fairly decent ’Sco crowd. The collegiate audience occupied an area about 10 feet from the stage, while the older folks were scattered around the bar, patiently awaiting Machinedrum. By 11:30 p.m., the student section of the audience filtered in, though it was unclear how

many students were drawn by the prospect of Machinedrum or how many had hoped for an evening resembling Splitchers and decided to stay for the show, considering they were already intoxicated. Regardless, Stewart, appearing very self-assured, took the stage and wasted no time in providing danceable, energetic tracks.

Machinedrum’s sound is characterized by fast-paced rhythmic patterns with heavy bass lines and smooth melodies. Most works seem rhythmically grounded — hence the name Machinedrum — with echoing snares and a kick drum eager to accent and syncopate. He uses sporadic soulful vocal samples to accentuate synth melodies and add personality to the atmosphere.

Many aspiring student producers were present, intrigued by Machinedrum’s set. A highly experienced performer, Stewart deserves acclaim as a master of his craft. He visually guided the audience into every drop, with somewhat goofy, drawn-out gestures. While many DJs are immobile, Stewart bounced around, which facilitated similar behavior within the crowd. He was spontaneous in his musical performance as well, adding percussive elements in real time with a sound pad.

Still, many audience members seemed disengaged. Maybe it was the dread of rapidly approaching finals or simply the desire for one last Splitchers before reading period. However, even those not quite enraptured in his sound could respect his craftsmanship and overall well-prepared set.