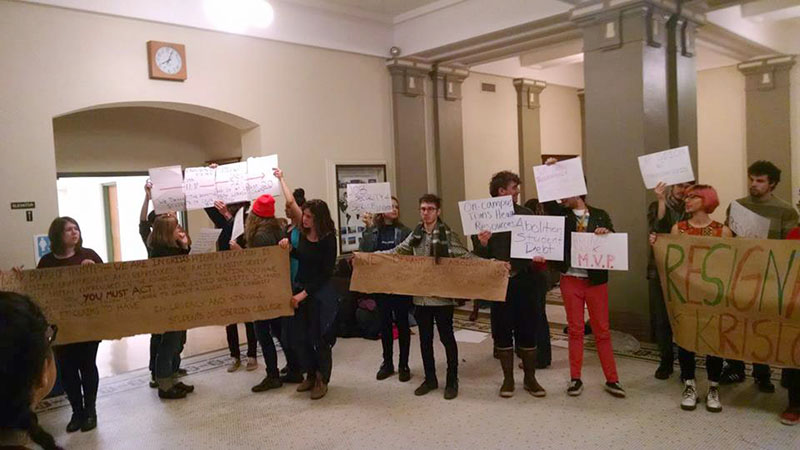 Students hold signs expressing a variety of demands outside Friday’s trustee dinner, including what many idenify as the College’s complicity in the systemic oppression of people of color. This week, some are pressuring the administration to temporarily suspend the standard grading system in the wake of nationwide protests and conflict following the deaths of Michael Brown, Eric Garner and Tamir Rice.

As of Thursday evening, over 1,300 students had signed a petition drafted by College junior Kiki Acey and other students of color demanding President Krislov suspend the standard grading system in the aftermath of the high-profile cases of Michael Brown, Eric Garner and Tamir Rice.

The deaths of these three Black males — as well as the non-indictments of the white officers who killed Brown and Garner — have gained national attention as representative of the country’s historic and systemic marginalization, brutalization and dehumanization of Black and brown Americans.

The petition, which was first circulated across Facebook and via email on Tuesday, calls for the College to institute a “no-fail mercy period” that would eliminate all failing grades and make a C the lowest possible grade a student could receive.

Though the administration has agreed to exercise flexibility in granting emergency incomplete requests for students struggling academically, a number of students have accused the institution of extending little other support for those who have been disproportionately affected.

“People’s communities are being mercilessly murdered and beaten in the streets every day around the world,” Acey said in a Facebook post regarding the state of Oberlin’s final examination period. “Others are being locked away by the millions for petty crimes. And many of us are still working every day just to be able to afford this education that fails to tell us how to free ourselves.”

The idea to request a suspension of the standard grading system was brought up during one of the many actions that students of color organized last week.

During these actions, students highlighted what they identified as the College’s complicity in the systemic oppression of people of color.

“It’s an inability to compartmentalize what’s going on in your life and around the world and on campus,” said College senior Megan Bautista, who met with Dean of Students Eric Estes in an attempt to garner institutional support for the petition. “This isn’t conducive to anyone doing well or to keeping up with their peers who are able to deal with this.”

Other than the announcement that the administration was willing to offer more flexible considerations of students’ incomplete applications, it has released relatively few public statements in response to student outcry.

“I will work to make this community as diverse, inclusive and safe as it can be,” President Krislov wrote in an email to the student body on Thursday. “I invite our students and all members of the Oberlin community to have a frank, open, and honest discussion of how we can work together to improve under- standing and achieve our shared goals.”

The President then outlined several initiatives that he believes will help achieve several of these goals.

In his emails, President Krislov resolves to collaborate “communication between [deans and faculty] regarding end-of-the-semester stresses,” to create a “campus climate team which will focus on issues of inclusion for all students” and to meet with small groups of students and others to hear their experiences and thoughts.

Recognizing Oberlin’s reputation as the first College to accept Black students — Oberlin graduated its first Black student 19 years before the Emancipation Proclamation was issued — many have voiced their disappointment and frustration over what they identify as the College’s lack of institutional support for students of color.

“[President Krislov] has made minimal efforts to help those of us on this campus who feel afraid for our lives,” Acey said. “We are expect[ed] to be our best through finals? … This is not a fleeting pain. This shit will be happening two weeks from now [and] two months from now. And we do not have time to process. … I see my friends breaking because they are literally forced to choose between what they’ve been told they need and what they feel they need to do.”

Though President Krislov maintains that the College is working hard to ensure students’ comfort and safety, the College’s administration has taken a more active role in past instances of national trauma.

In May of 1970, the administration suspended classes and the standard grading system for the remainder of the year in response to the National Guard’s killing of four unarmed students at Kent State University in Kent, Ohio.

The administration issued the suspension in the wake of mass student pressure.

In addition to the suspension, students had the option to take their most current grade or find a more conducive agreement with their professor in order to better focus on their activism, as well as to construct support systems for themselves and their communities.

Many Oberlin students and professors were also actively protesting America’s involvement in the Vietnam War at the time of the shootings.

In an open statement to the College, President Robert K. Carr explained his reasoning behind the decision to suspend classes — a choice that many peer institutions quickly adopted.

“Students and faculty alike have done their best to use the final two weeks of the regular semester to come to grips in creative and significant ways with the acute problems now facing mankind,” Carr wrote. “In doing so, they have been acting within the great tradition of moral and educational response to human needs that has made Oberlin a unique College since 1833.”

Throughout the letter, President Carr highlighted the importance of community support and continuously referenced Oberlin’s roots as a progressive trailblazer.

President Carr and the rest of the General Faculty had also been meeting numerous times prior to the suspension; during these meetings, they drafted a letter to President Nixon demanding he withdraw American troops from Vietnam and the rest of mainland Southeast Asia.

“It is in our best traditions to challenge the wisdom and question the justice of national policies at home and abroad that do not conform to our understanding of the principles which should guide American policy,” the letter read.

The College’s Steering Committee also agreed to fund transportation for students who wished to travel to Washington, D.C. to attend anti-war protests but who couldn’t afford the costs.

In contrast to the formalized responses that the administration issued in the 1970s, the current administration has taken a more piecemeal approach in its response to student concern.

Some responses include Krislov’s column in the Source last week, the highly attended interdepartmental teach-in and the actions of various professors and administrators who have met individually with students.

However, many students have ex- pressed anger over several of the responses from faculty and staff that have been made public.

One such response was in opposition to the petition, which was circulated through Oberlin’s email listserv. Administrative Assistant to the Office of the Controller Debra Thomas replied to the email saying she found the subject line of the email, which included the #BlackLivesMatter tag used by thousands of protesters around the world, to be offensive.

“ALL lives matter,” Thomas wrote in an email to the several hundred students that were a part of the thread. “I don’t care if you’re black, white, yellow or green. I’m tired of this racist nonsense and tired of everyone screaming about specific races being targeted. Blacks and hispanics [sic] are no longer the minority. We are all HUMANS, not colors.”

After numerous students responded to what some defined as her “post-racial bullshit,” Thomas apologized for “unintentionally offend[ing] half the campus.”

Though several professors have been supportive of student efforts, others answered emails asking for grading or deadline flexibility with a single “No,” or ignored them.

While many students were unable to come to an agreement with their professors, a small group of student-athletes of color successfully convinced the College’s Athletics Department to issue a statement in support of their peers.

“We cannot tell you how to feel or how to respond, but we support you,” the department wrote in an email to varsity athletes on Thursday. “We can hear you. We can see you. And we stand with you. We are proud to be associated with students who speak up for their beliefs and for the rights of others.”

Students are continuing to work with one another in an attempt to garner institutional support for students of color — specifically Black students — who are disproportionately affected by the recent killings. At press time, the petition continued to circulate.

This week, students have been working on a list of demands to present to the administration. The demands currently include instituting weighted referenda for students of color, creating central spaces for deans to meet with students on a weekly basis, and giving students the power to hire and fire the position of the Dean of Students.

“People are really sensing that this is necessary,” said Bautista. “The administration would be insane to leave this up to the professors.”