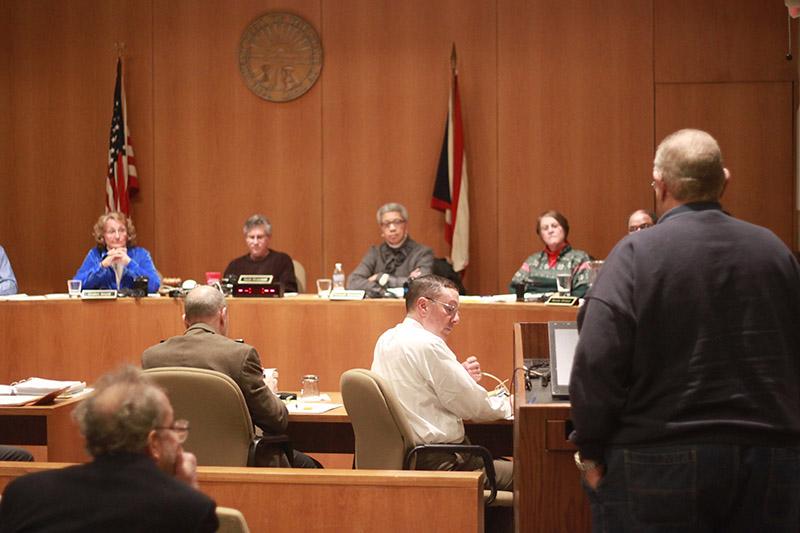 Rick McDaniel, an Oberlin resident and former head of Safety and Security, complains about the lack of transparency regarding the City Council’s request for the city manager’s resignation. Eric Norenberg, the city manager, has refused to resign.

After requesting the resignation of City Manager Eric Norenberg last month, the Oberlin City Council plans to air its concerns and discuss the low yearly evaluation scores Norenberg received in an executive session this Monday.

“I’m looking forward to working through this process in a way that’s satisfactory to everyone, so we can get back to doing the real work and not be so distracted by divisions in the community,” said City Council member Sharon Pearson.

The Council presented Norenberg with a letter requesting his resignation on Jan. 8 with the signatures of four out of seven Council members.

According to Bryan Burgess, a member of Council for the past five years, the Council is divided in its opinion of Norenberg’s performance.

Burgess, Pearson and fellow Council members Elizabeth Meadows and Kristen Peterson signed the letter, and all gave Norenberg low yearly scores, with the exception of Pearson, who did not participate in the numerical portion of the evaluations. City Council member Ron Rimbert also presented Norenberg with low scores but did not sign the letter.

However, the president of the City Council, Scott Broadwell, and Vice President Sharon Fairchild-Soucy both gave Norenberg’s yearly performance a high rating.

The city charter requires a 5–2 supermajority and the opportunity for a public hearing to officially dismiss a city manager. The vote to request his resignation was 4–3.

Norenberg declined the request, stating in a letter to the Council that he is “committed to the city of Oberlin” and “stand[s] by [his] record of leadership, management and decisions.”

“I had been looking forward to meeting with the Council to sit down and discuss my evaluation and was not anticipating that there was anything significant enough to generate a request like this,” he said.

Norenberg received an average of 1.7 out of 3 possible points across seven evaluation categories, including leadership, planning and organization, communication, problem-solving and community, employee and intergovernmental relations. The average scores were low across all categories.

Burgess said the request for Norenberg’s resignation stemmed from multiple problems: “It’s been a culmination of things over the past year. Not any one issue.”

In the evaluation, the Council raised a variety of concerns, including questions about the city’s decision to cooperate with the county on Oberlin’s storm water plan, a request for better support of Climate Action Plan projects and issues surrounding Norenberg’s communication with the Council, such as the decision to purchase the Green Acres property.

The request for resignation stated that the “sense of trust” between the Council and the city manager has been strained due to the free reign of department heads, “reactive rather than proactive” management and the failure to consult the Council on certain staff-level decisions.

Norenberg defended his management decisions, stating that his job required guiding employees without always first consulting the Council and balancing many different projects.

“I think that I have done an excellent job of being city manager, and some of the responsibilities as city manager involve making administrative decisions that don’t necessarily require Council authorization ahead of time,” he said. “I try to manage the department heads that report to me without micromanaging. … It’s a balancing act as a manager in any kind of situation where you’re supervising a complex operation.”

This is the first time Norenberg has received a low score on his yearly evaluation since he took the position in 2007. In both 2012 and 2013, Norenberg received an average score of 2.7.

According to Broadwell, Norenberg’s performance of his duties in 2014 is consistent with his performance in past years.

“There really hasn’t been a change,” said Broadwell, “Certainly not to this degree, which is why it was really kind of shocking the way this came out.”

Pearson said the request for resignation was not meant to be an attack on the city manager. Instead, she views the Council members’ dissatisfaction with Norenberg as a challenge to the status quo and a way to begin fixing ineffective processes in the city government.

“I think we set ourselves up to be more progressive in a lot of areas, and I think there are a lot of people who want to move into a progressive mode of operation and not necessarily just [maintain] the status quo.”

The reaction to the request for Norenberg’s dismissal has been mixed both in the Council and among community members.

“Even though there are a lot of residents that have had good experiences with the city manager, there are a whole lot of other comments I know I have personally received that are not as positive,” said Pearson.

According to Norenberg, city employees have also expressed concern about the request for dismissal and view it as a critique of their own performance.

“Some of the criticisms leveled at me have been worded in such a way that implied that not only is Council dissatisfied with me but with many of the employees involved in this organization,” said Norenberg. “I think it’s unfortunate that we’ve had very hard-working and dedicated employees very stressed out over this situation.”

Pearson says community members have had problems with the services of some departments, and she is dissatisfied with Norenberg’s management of the department heads. For Pearson, requesting the dismissal of the city manager is one way to address these issues.

These concerns and the results of the evaluation will be fully discussed with Norenberg for the first time during the executive session on Monday. The Council’s contended 4–3 decision to make this meeting private is an attempt to candidly discuss issues during a situation which has been otherwise public and messy, according to Pearson.

Broadwell, one of the Council members who supported the move to make the meeting open to the public, expressed concern about the Council’s communication of these issues with the community.

“We’ve made some motions to have this discussion during a public work session to get things out in the open, which is not normally done,” Broadwell said. “We need to get out there and discuss it in public and really see what’s going on so we can see what the issues are here.”

Pearson, Broadwell and Norenberg say they don’t know how the executive session will proceed, but they hope to move forward soon and tackle city business instead of internal issues.