In the Locker Room with Ana Richardson and Monique Newton 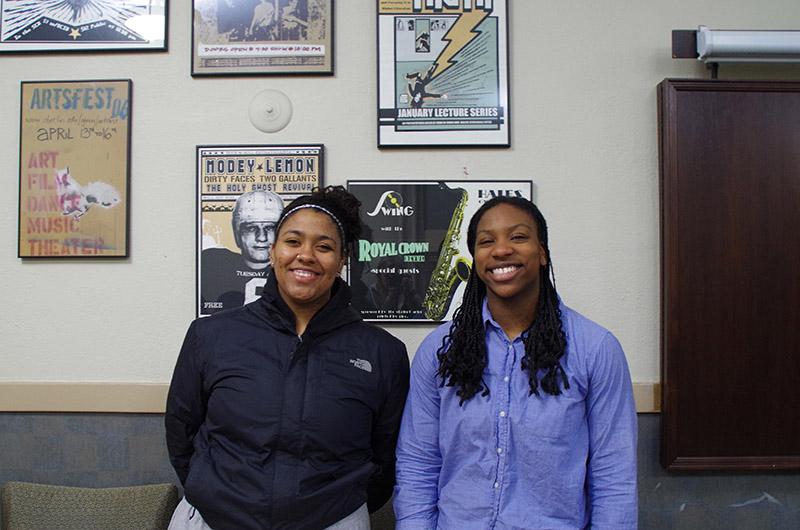 This week, the Review sat down with women’s track and field rookies Ana Richardson and Monique Newton to discuss their early success, transitioning from West Coast to Ohio weather, preseason and more.

You are both first-years playing a varsity sport in college for the first time. Has this always been an aspiration of yours, or did you decide to join track after arriving at Oberlin?

Monique Newton: We were both recruited, so we were expecting to come to be on the track team. It’s weird meeting some people who weren’t recruited and just do it because they love it. I’ve always done track, so I can’t imagine not doing track.

How does the commitment of Oberlin’s track and field team compare to your high school team?

AR: For me, my high school time commitment was the same, but that was only because I was the only thrower. Also, my coach was willing to put in time outside. So the time was the same, but the workouts were not the same. So I’ve definitely brought my athletic level up by a ton since I’ve been here.

Why were those first two weeks so bad? What did you have to do?

AR: We hit the ground running.

MN: We just did so many different things at so many different practices. Just a bunch of running, and then you’re not done and you have to do something else. Plus, the first two weeks we weren’t really in the best of shape. It was just bad.

AR: [Coach Hepp] gave us this packet to do over the summer. And I was like, ‘This is ridiculous, I’m not going to do this all.’ Then I got here, and basically he expected you to be able to do the stuff. The first day, we did sprint suicides, and we were out of shape and had just done plyometrics before that. Then he would teach us to throw weight after we ran, but we made it through.

Did you decide to go to Oberlin because of track and field or was it a combination of athletics and academics?

AR: It was really Coach Hepp. We were both recruited D-I. We could have gone D-I if we wanted to, but Coach Hepp really stressed our education and how important that was. So really, I don’t think I came to Oberlin for track. I was recruited and found out about Oberlin through track, so that was really cool, but I didn’t come here just to do track.

You have already both been honored by the NCAC with Athlete of the Week recognition. Can you tell us what this success means to you so early in your collegiate career?

MN: It means I’m on a good track and starting off strong. Especially working as hard as we have, it means we are getting results and it’s worth it. It’s nice because if I was throwing the same as I had been in high school, I would have been like, ‘What the heck? I’m working so much harder now,’ so it’s nice to be getting better.

AR: We both [set personal records] the first time we threw, which was really nice.

Do you have any specific goals for the rest of the season?

MN: Well, I made it to nationals, so hopefully I do well at nationals.

AR: And she has the school record by like, four feet.

MN: That’s the goal. Just keep getting better. I really hope I PR again and that wasn’t the furthest I throw this year.

AR: Mine is the same. In weight throw, I’ve been getting better and better, but I was hoping to at least get second in conference. I think I’m ranked third right now, but I have to get to 15 meters, which is a couple more feet. I know I can do it. And hopefully, not this year, but next indoor season, I can make it to nationals in weight. I just want to do well in conference coming into the spring season.

How was Winter Term in Oberlin?

AR: Yeah, it was super cool. We all went to Dascomb together after practice and got to meet people. It was really fun, for sure. I feel like as a team, we got closer to other teams, like basketball.

You’re both from the West Coast — how is the snow treating you?

MN: Man, that first week [of January] was brutal. I remember as soon as I walked outside the airport doors, I was like, ‘Oh, I don’t know if I can do this.’ But I mean, you learn that you can’t really control it, so it is what it is, but I don’t like it.

AR: I’m from Eugene, OR, so it doesn’t snow, but it gets to be 24 degrees and clear. Or it’s 40 degrees and raining. So I’d rather have it be cold and snow everywhere. It’s pretty.

What have been your high and low points of the season so far?

MN: High point: first meet of the year, kicking it and doing great. Low point: A couple of weeks ago, I got hit with a weight and hurt my butt. Deep, deep bruise. So I missed practice for a week and a half and didn’t get to go to any of the meets over Winter Term. Last week was the first week I started practicing again. I feel really good this week. I’ve never been injured and had to sit out for that long, so it’s weird.

AR: My low point was definitely the first week I was here. There was a point where I was like, ‘Do I really need to do track?’ Of course I was being petty, but I was way out of shape and had anxiety about going to practice because I was so tired all of the time. I didn’t do well on my first Biology test because I was just so tired and didn’t know how to study. Right now, I’m in a transitioning period in weight, and I feel like I’m going to be able to do a lot better. So my high point is just progressing and feeling more comfortable, working harder and doing better. I’ve just become a better athlete overall, so it’s not a specific high point.