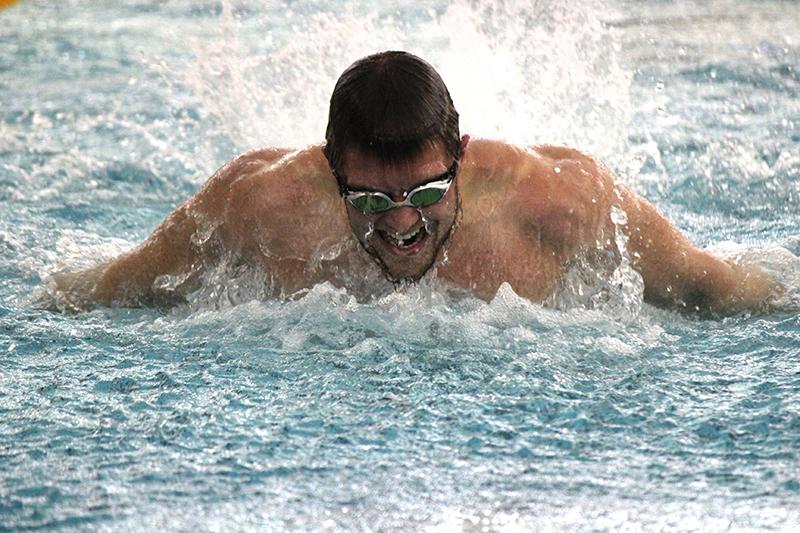 Senior co-captain Jack Redell swims the butterfly in a home meet against the John Carroll University Blue Streaks on Jan. 17. The swimming and diving team concludes its season with the NCAC Championship, which begins next Wednesday in Granville, OH.

With the NCAC championships around the corner, the swimming and diving team has kicked off its preparation for the conference competition. The Yeowomen will look to extend the success they saw in January, while the Yeomen seek to improve their conference standing from last season.

The Yeowomen finished with a perfect 3–0 record in January, besting the Allegheny College Gators 217–79 and the John Carroll University Blue Streaks 165–69. Against the Ohio Wesleyan Battling Bishops and the Notre Dame College Blue Falcons, the Yeowomen raked in a whopping 787 points for yet another victory.

The tri-meet win against Ohio Wesleyan and NCAA D-II Notre Dame was capped off with a win in the 800-yard freestyle by the relay team of first-year Oriene Shiel, sophomores Maddie Prangley and Nora Cooper and junior Samma Regan, which finished first with a time of 7 minutes, 59.80 seconds. Yeowomen swimmers also took second and third place in the race.

Regan was one of several Yeowomen who excelled in January, recording three first-place finishes at John Carroll University and winning both the women’s 100-yard and 200- yard individual medleys at the Ohio Wesleyan tri-meet. Regan attributed the team’s success to their vigorous work ethic, along with the luxury of less schoolwork during Winter Term.

“The month of January has been pretty exciting for us,” she said. “We were able to defeat teams that were pretty challenging. I attribute this to the fact that hard work pays off. During the semester we worked really hard both inside and outside of the pool. The pressure of schoolwork is lessened during Winter Term, allowing us to focus on swimming fast.”

Senior co-captain Jack Redell also had a strong showing in his last home meet, finishing third in the men’s 50-yard free with a time of 23.62 and placing second in the 200-yard breaststroke with a time of 2:26.43.

Looking ahead to the NCAC championships, Redell expressed his confidence in himself and his team.

“The NCAC championship is the biggest meet of our season,” he said. “Over the last few weeks of the season, we’re able to rest our bodies so that we can perform at our absolute best at the final meet. This year, we’re expecting some huge time drops. A lot of swimmers have seen lifetime bests this season so far, so it’ll be really exciting to see what happens when we’re well-rested.”

Head Coach Andrew Brabson is confident that both the men’s and women’s teams are more than prepared for the conference competition this season and that, moving forward, the best preparation will consist of working on minor details and getting minds and bodies ready for one final meet.

“At this point in the season, all of the hard work and tough training has already been completed,” he said. “The points of emphasis leading up to NCACs are fine-tuning the small things, getting rest and preparing mentally for peak performances.”

The Yeomen and Yeowomen will conclude their grueling season when they head to Denison University to compete in the NCAC championships on Feb. 11.