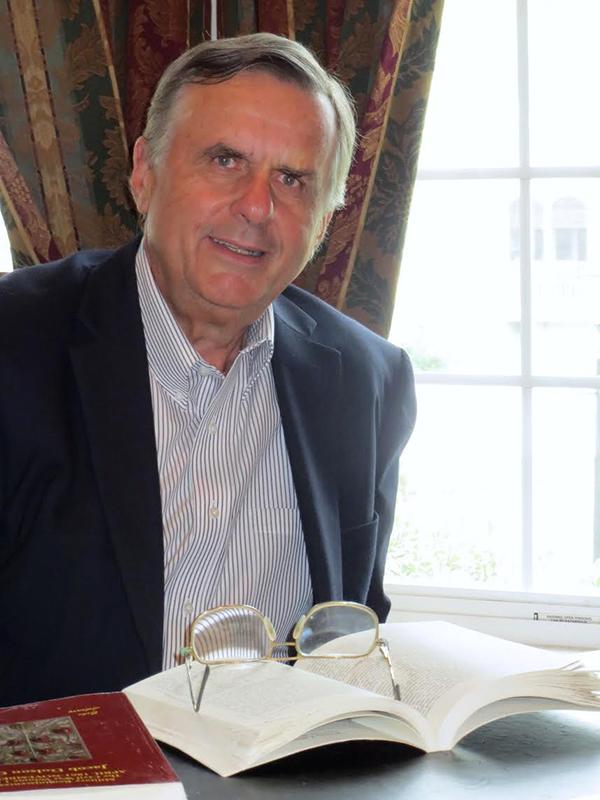 Eugene D. Schmiel first came to Oberlin in 1969 as a graduate student at the Ohio State University writing his dissertation about Jacob Dolson Cox, OC 1850, a Civil War general who left his papers to the College archives. Cox later became governor of Ohio and secretary of the interior. Schmeil worked in the Foreign Service for 24 years. He served in five different countries during his career before retiring five years ago. He has spent the last four years writing Citizen-General: Jacob Dolson Cox and the Civil War Era, which came out last year from Ohio University Press and is available at Mudd Library and online for purchase.

What first sparked your interest about Cox?

My major at Ohio State was 19th century American history. I did some research; I was very interested in writing a biography, and Cox lived from 1828–1900, so his life spanned most of the 19th century. He had a very interesting career in politics and the military, so he seemed like the perfect subject. The fact that he left all of his papers to Oberlin, he had good handwriting and he kept copies of all of his letters helped.

Who was Jacob Dolson Cox, for those who don’t know anything about him?

There was a professor that I met from England who had been doing some research on Cox. He said Jacob Cox might be the most intriguing character from the Civil War era that most Americans have never heard of. For Oberlin he was very important because he married the daughter of Charles Finney, one of the key characters in Oberlin’s early history. Cox was on the Board of Directors at Oberlin and retired at Oberlin for his last few years. He was a pivotal figure who had so many careers. He was also one of the best, if not the best, political generals in the Civil War.

When the Civil War began, the U.S. army had 16,000 men. When it ended they had almost 3,000,000. So by definition they had to have thousands of generals. Very few people had gone to West Point. West Point had maybe 100 students. It was tiny. Cox was one of those who proved that you could become a good general without having studied there. He was also a historian of the war. He was a very meticulous historian, which is difficult when you’re a participant yourself, and he’s still a respected historian today.

How did Cox come to Oberlin?

Charles Finney went on evangelical tours, and he was in New York giving a speech and calling on people to come to God. Cox was overcome; he came to the front and said, “I want to come to Oberlin and be a divinity student.” He came to Oberlin as an undergraduate and was on his way to becoming a professor of Theology. He had a religious commitment to the school. He got there in 1846 and left in 1851; he left because he had a quarrel with Finney over religion. He became very active in the Republican Party. He was one of the founders of the party in Ohio and became very active in local politics.

Why did Cox decide to join the army when the Civil War began?

In 1859 he was elected to the Ohio Senate. He decided to run after the Oberlin-Wellington Rescue, an incident in which men came to the Oberlin area looking for an escaped slave from the South. They couldn’t find him, so they just captured a couple of Blacks who were living there, and the local people attacked [the slavers] and wouldn’t let them get out. There was a huge court case about it. Cox made some public speeches and said, “We can’t deal with this through violence; we can only deal with this through the law and the legislature.” So he decided to run. He was in the Ohio Senate of 1860–1861 when the war started.

The year before the war, Cox had been studying military topics. He could read Greek, Latin and French. He was one of the strongest anti-slavery proponents in the Ohio Senate. So he thought that if there was going to be a war, it’s people like him — people who are calling for not letting the South secede and calling for stopping the spread of slavery — who would have to fight. So he said, “I’m going to have to become a soldier.” He studied for it, he lobbied for it, and he received a commission as a brigadier general when the war started.

What was the war like for Cox? What were his major successes and failures?

In the beginning his job was to train new soldiers. He was sent to Camp Dennison, near Cincinnati, where he served under George McClellan. They began the war [as] very good friends. McClellan assigned him to train the troops for a few months, and then in July of 1861 he gave Cox an autonomous command in what is now West Virginia. McClellan thought it was a good idea to send troops into northern Virginia because he thought that would serve as a good base for Union attacks into the rest of Virginia. He sent Cox on a mission with 2,500 men down the Kanawha River towards Charleston, which is now the capital of West Virginia. Within about a month, they had pushed forward, [taken] control and pushed the Confederates out.

Cox had a very successful first month as a general. Cox was in command by himself with no military experience. He played a key role in helping the creation of West Virginia, which eventually broke off from the rest of Virginia because of the Civil War.

In August 1862 he was called to Washington for a new campaign that eventually led to the Battle of Antietam. At the Battle of Antietam, Cox, along with Ambrose Burnside, was one of the two commanders of the left wing of the Union army. So that was a relative success. The most important part was that Lee retreated back to Virginia, and Lincoln, because of the relative success, issued the Emancipation Proclamation.

What kind of general was Cox? What did his soldiers think about him?

He was very stoic. He was an intellectual. In all my research I found that he was emotional once in his life, and that was during the Battle of Franklin, when things were about to go very, very bad for the Union, and he got emotional and started screaming and yelling at his men to hold the line.

His troops didn’t love him because he was not that kind of guy, but they all respected him and they knew that if he told you to do something it was the right thing to do.

Do you think Cox has been overlooked by historians and/or the general public? If so, why?

He didn’t self-promote. He didn’t try to make more of himself than he was. In many ways he was shy, which sounds very strange, but he always said that what he’d like to do was go into a library, be with his family and read books by the fireside.