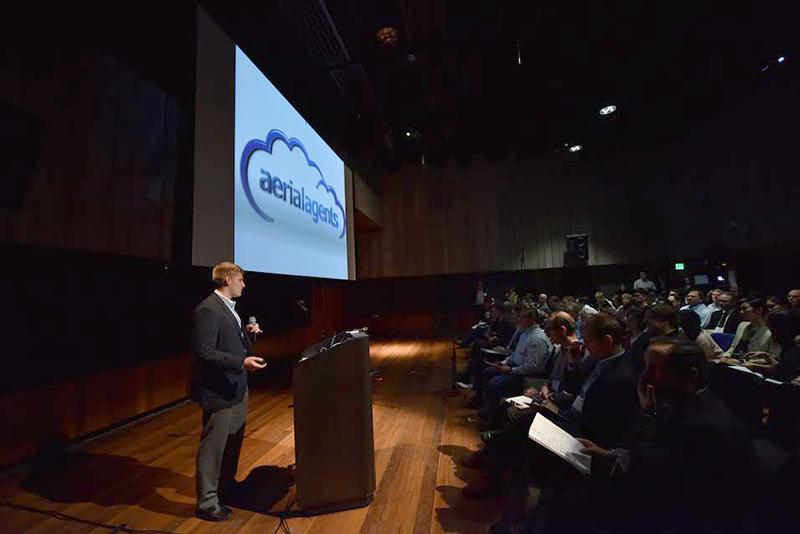 Jake Hochendoner describes his venture, Aerial Agents, at the LaunchU Pitch Competition on Saturday. The Competition gave aspiring Oberlin entrepreneurs the opportunity to present their ideas to alumni judges.

Twenty teams of aspiring student and alumni entrepreneurs competed for $50,000 in investment money at the third annual LaunchU Pitch Competition held last Saturday. The competition was the culmination of the 2015 LaunchU Winter Term program, during which the teams honed their business plans, perfected their pitches and listened to speakers brought in by LaunchU.

“It was pretty rigorous — nine-to-five every day, including Saturdays — so it was like a job,” said Minh-Jeffrey Lê, a third-year College student whose business Subtletees, a venture that produces American-made pocket T-shirts, won the Local Venture Prize. “But we learned a lot about building a brand, being authentic. We spent a lot of time on public speaking and presentation skills, marketing, advertising, building a good product. It was very useful,” he said.

According to John Knific, CEO of Decision Desk and Oberlin’s entrepreneur-in-residence, the pitch competition was not the most essential part of the LaunchU program.

“Pitch day is important because, just like a recital for the Conservatory, it’s important to have a showcase for the hard work you put in,” Knific said. “The pitch itself is not what we’re about. What we’re about is developing business models with the student, and that’s not an easy process… When you actually sit down and work on something for three weeks straight, it ends up morphing a lot. The pitches we see at the end are usually not a polished version of the pitch we see coming in; they’re usually a bit of a pivot away from the original idea.”

“One good thing about LaunchU is that they help you rationalize your goals,” said Hassan Bin Fahim, a College first-year and LaunchU participant whose fledgling nonprofit company, base. pk, helps people create websites in Pakistan. “Our goal is that by the end of 2015 we’ll have at least 150,000 users in Pakistan and hopefully will have started growing in India as well. LaunchU helped me to set that goal, and the $2,500 I got in grant money will help a lot,” he said.

The judges for the pitch competition were mostly Oberlin alumni, many of whom had started successful businesses themselves. After the LaunchU participants gave their pitches, the judges peppered the budding entrepreneurs with questions about their plans.

“A lot of the alumni who came here were very useful in the feedback they gave,” said Bin Fahim. “They have so much experience in the practical world that they were really useful at pinpointing problems that you might face and strengths that you didn’t even recognize you had.”

“The grant money is exciting, but if these businesses are going to be successful, that’s not enough capital. The more important thing is bringing people together,” Knific said.

Lê agreed, and stated that he found getting to know the LaunchU judges even more valuable than the money he won at the Pitch Competition.

“Through LaunchU, the biggest thing was the connections. Oberlin alumni are looking out for you; they want you to succeed, and people really forget that,” Lê said.

During the pitch competition, President Krislov briefly got on stage and spoke about how excited he was about LaunchU. He also said that the Strategic Planning Steering Committee was thinking about ways to “make it even bigger.”

“I think making it bigger would mean expanding it to not just Oberlin’s campus,” Knific said, when asked about what Krislov’s comments would look like in practice. “We’re starting to see alumni teams from all over, from the coasts and even internationally. We had a participant from Belgium and a team from Mexico this year. I think it means developing entrepreneur communities, with Oberlin helping them in their own communities and then using the LaunchU pitch day as sort of a hub to bring people back. We’ll start to see more and more interesting teams that way, and also maybe the opportunity to run incubators in different regions,” he said.

“I think the culture at Oberlin is changing a bit,” Knific added. “You don’t think business school and you don’t think engineering and technology school when you think about Oberlin. But the students, so many of them, are very gifted in those areas.”

According to Bin Fahim, LaunchU was critical in attracting him to Oberlin in the first place.

“I was really into entrepreneurship at the end of my time in high school; I knew it was something I really wanted to do. But I also liked the concept of a liberal arts education. So I looked up liberal arts schools that also had an entrepreneurship program and found Oberlin,” Bin Fahim said.

“I think there [were] already a lot of students who wanted to launch companies who didn’t know how, and there are a lot of alumni who leave, start ventures and don’t have an affiliation with that company being an Oberlin company,” Knific said. “We want to pull them back and connect them back to Oberlin, and if we’re doing our job we’ll be creating more of them as well.”