Off the Cuff: Steven Salaita, pro-Palestinian activist and professor of American Indian studies 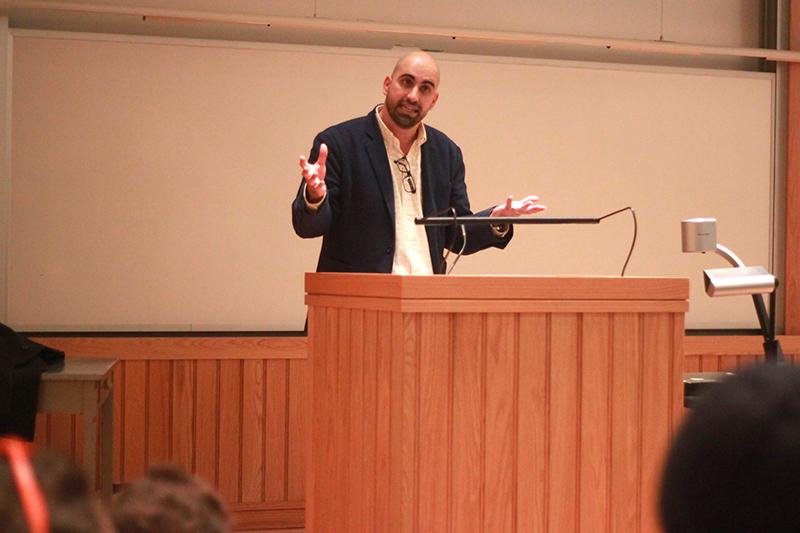 Steven Salaita, an academic and pro-Palestinian activist at the center of a Twitter controversy, who spoke at Oberlin on Tuesday night.

Steven Salaita is a professor of English and American Indian studies and a pro-Palestinian activist. Last August, he had his offer of employment with the University of Illinois at Urbana-Champaign rescinded when he made a series of tweets that sharply criticized the Israeli government during Operation Protective Edge. Salaita had not yet begun teaching at UIUC but had received a formal offer and had already resigned from his previous position at Virginia Tech when the Board of Trustees at UIUC voted against a measure to approve his hiring. The Board was reportedly pressured into dismissing Salaita by donors, parents and professors who felt that Salaita’s tweets about the 2014 Gaza conflict were anti-Semitic. Salaita has vigorously denied the accusation and is currently suing UIUC to be rehired. Salaita gave a talk at Oberlin sponsored by Students for a Free Palestine on Tuesday in which he spoke about his situation, his views on academic freedom and the Palestinian conflict.

Why do you believe academic freedom is important?

Scholarship really can’t occur without it. It can occur, but interesting scholarship can’t occur. Academics need to be able to challenge conventional wisdom — challenge the status quo — and without that ability, the system of ideas on which the university is supposed to be based stagnates.

Do you think that there’s something specific about the Israel-Palestine issue that makes speech about it more likely to be suppressed?

Yeah, there definitely is. Professors have been fired for it. A lot of people have never been hired in the first place for their advocacy on behalf of Palestine. One of my attorneys called it a ‘Palestinian exception to the First Amendment.’ It’s said very often to be divisive and controversial and therefore unproductive, so we should just stay away from it. But in my mind, precisely because it has the potential to be divisive, because it’s complicated, because it’s hard to talk about, the college campus is precisely where those conversations ought to occur.

If you were an administrator at somewhere like Oberlin or UIUC, where would you draw the line in terms of professors’ speech?

In terms of the boundaries of what’s acceptable versus what veers into hate speech, I would draw the line in pencil rather than pen. I don’t know if there’s a set of universal criteria that we can use to broadly determine what is hate speech and what isn’t. There are always going to be political considerations that inform our notions of acceptable speech versus hate speech. That’s the first thing: I would draw the line in pencil, but I do believe there are clear examples of hate speech. The problem is I would set the boundary in a different way than my colleagues might set the boundaries , and administrators might exploit the situation by setting their own boundaries based on policing viewpoints that they simply don’t want to hear or deal with.

In the end, academic freedom requires due process. So if a professor says something that raises a controversy, like I did or lots of other people have done, there needs to be a system of due process where people can closely examine what was said and [in] what context it was raised, and whether it meets any reasonable standard of hate speech versus simply acrimonious political debate. And secondly, I think it’s important to note where the speech act occurs. Did it occur in the classroom? Did it occur in a departmental meeting? Was there any physical or personal intimidation involved? Did it occur completely outside the context of the university, like on Twitter or Facebook? All of these questions come into play, and without the careful system of due process it becomes way too easy for upper administrators to arbitrarily determine that something is unacceptable and act on that belief without careful consideration of the context.

How would you respond to someone who would call your tweets ‘uncivil’ or ‘not productive’? Do you think speaking roughly can add something to political speech?

The first thing I would say would be [that] neither academic freedom nor free speech are contingent on civility or productivity. More than that, it depends on who you ask. I would urge people to not be so subjective in their judgments. It really depends on who’s reacting to the tweets and the politics the listener brings into an engagement with them in the first place. Palestinians are perfectly happy with my tweets — do you know what I mean? Anti-Zionist Jews have been perfectly fine with my tweets. I don’t want to just reduce it to ethnicity or politics; I just want to point out that in situations where tremendous violence is occurring and you feel a party to it, sometimes you feel like speaking roughly. Sometimes you feel like cussing. Sometimes you feel like expressing anger. Sometimes it’s the human thing to do, to express anger.

And I would say there are way more tweets that express restraint and compassion. You can’t pull out 10 quotes from 10,000 and say that that’s a representative sample of how I communicate on that platform. When you’re a witness to what reasonably might be called, by its legal definition, genocide, you’re not always in the mood to use flowery, civil language. Sometimes you want your language to try its best to match, in terms of its power, the horror of what it is you’re witnessing and responding to.

How do you think students at Oberlin or elsewhere should try to defend academic freedom?

I would suggest contesting the language of civility that the president [of UIUC] and other administrators have been trotting out. It’s a really subjective term; it’s a term that implies something noble without ever having to define how it’s actually performing. So students need to know how these terms are performing vis-à-vis what you’re actually allowed to do versus what might get you in trouble.

Second of all, keep your ears open for what is happening among the faculty and administration and what’s happening in your own classes. Pay note to the ways in which certain points of view are stifled or discouraged. These things don’t often happen formally. That’s the thing — they happen informally, through all kinds of informal modes of coercion and consent. Keep your ears [open] to them, and don’t let administrators or professors or fellow students try to suppress articulation of legitimate points of view — I’m not saying right points of view, they’re legitimate in the sense that they have a right to be raised, at the very least — by evoking this flowery humanistic language that is in fact meant to forestall certain forms of political articulation.

What role do you think your support of the Boycott, Divestment and Sanctions movement had in your dismissal and in how people reacted to your tweets?

Let me preface by saying that these are observations; they’re anecdotal. I don’t have hard evidence that would suggest that what you mentioned are the reasons, but I suspect they played a role somehow, at least in making me visible in a certain way. Some folks have confessed to having tracked my Twitter account for at least a year. Without my participation in these BDS initiatives, I don’t know that I would’ve been visible in such a way so as to have been tracked and monitored in the first place. So I think, at least tangentially, it played a role. But also, it’s part of a broader process where strong critics of Israel deal with forms of retribution or attempted retribution. It’s an ongoing process. We’ve seen scholars write in the Jerusalem Post that one way to deal with professors who support BDS is to look through their scholarship and try to find instances of plagiarism to try to get them fired, and so I can’t separate my situation from this historical process.

I remember watching an interview with Noam Chomsky where he was talking about his position on BDS. He said he opposed it on tactical grounds, saying that it makes pro-Palestinian activists more vulnerable to accusations of anti-Semitism. As someone who has been accused of anti-Semitism and supports BDS, what do you think about that?

As always, Chomsky is raising a strong and provocative point. On this issue, I find myself in a rare disagreement with him, also on tactical grounds. I think it’s important to note that morally and politically, Chomsky doesn’t appear to have a problem with BDS. He strikes me as somebody who has essentially endorsed its content without actually endorsing it and making his endorsement formal, but I think that day is coming sooner rather than later.

I don’t believe that we ought to inhibit our activism or our tactical approaches based on the fear that we’re going to be outfitted with a particular slur. I think Chomsky’s point would be more convincing if that charge of anti-Semitism that he worries about was actually true. But because it’s not true, it seems to me that to stop BDS simply because we might be accused of anti-Semitism is ceding too much ground to that particular tactic, which needs to be confronted and challenged. I’m not going to stop short of what I feel needs to be done simply because somebody might falsely slander me. That, to me, isn’t a good enough reason to stop BDS.

You’re pursuing legal action with the University of Illinois to get your job back. If you won in court and were rehired, would it be strange working at a school where there’s a certain amount of antagonism between you and the administration?

It’s always possible that it would be strange, but I doubt it for a few reasons. Number one: In university settings, we don’t tend to interact with upper administrators very often if at all. Faculty are largely self-governing or are supposed to be self-governing. The administrators I most frequently interact with would be the department chair, maybe the dean occasionally, but really very rarely with the provost or the chancellor and never the board of trustees. And second: I don’t think it would be strange or antagonistic because, were I to be reinstated, I would go in with the attitude of being open about it, being willing to communicate with the administration, basically being totally willing to bury the hatchet and move on.