In the Locker Room with Manickam Manickam, Michael Drougas and Robert Gittings 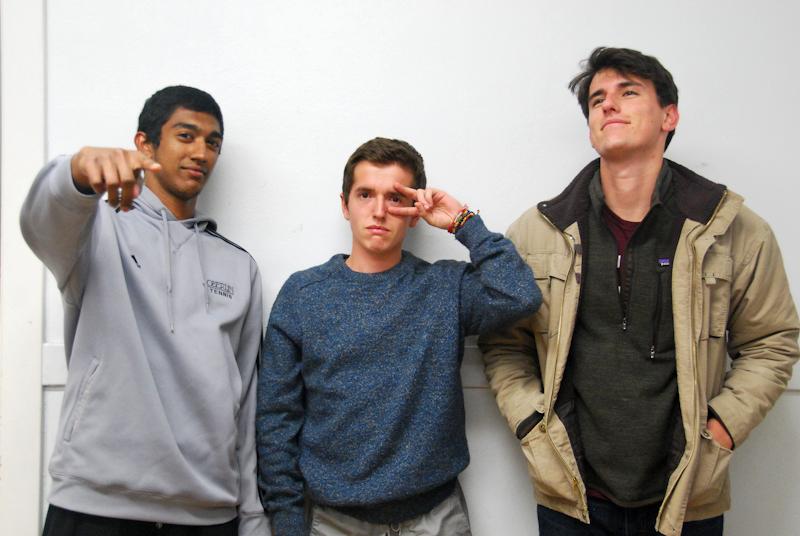 This week, the Review sat down with men’s tennis first-years Robert Gittings, Michael Drougas and Manickam Manickam to discuss their young team, the tennis program’s recent success and their trip to Australia.

How would you assess the season thus far?

Manickam Manickam: Our trip to Australia was a once-in-a-lifetime experience. As for this past Saturday, it was disappointing losing to Wabash [College] in a close match, but the Tiffin [University] match was more of a relaxed setting. We got to play people that didn’t get a chance against Wabash. I don’t think we should hang our heads from Saturday, though. It was a lot to build on.

Michael Drougas: I think it’s going well. We’re practicing really hard, so hopefully we can have a good season.

Robert Gittings: We’ve had a lot of opportunities to get closer and more bonded, and going to Australia was a really big part of that. These last two matches were on the same day, so we were at the gym for about 14 hours. That was another big opportunity for bonding and getting closer.

Has the season met or exceeded your expectations?

MM: I’ve watched a lot of college tennis matches before, but actually participating in one like a conference match against Wabash was really shocking to me. It was our first conference match for all three of us, so we learned from it. I’m definitely happy with how we’re doing so far and with how hard we’re working. It’s all putting us in the right direction.

MD: I think my experience thus far has exceeded my expectations. The team environment is really pretty cool.

How have the veterans on the team helped you improve your game since you got to Oberlin?

MM: We only have three upperclassmen. Soren [Zeliger] is our only senior, and Brandon [McKenna] and [Callan Louis] are juniors. Soren has been an awesome leader on and off the tennis court. Academically, he’s been really helpful to me. Those guys have been a part of teams in the past that were weaker than what we’ve been the last two years, so they know what it’s like to face adversity. I think they are really excited about the program this year, and that kind of trickles down.

MD: I think having maturity and people who have gone through what we’re going through for the first time is always helpful.

RG: The best thing about them is that they’re all super nice people. It’s really easy to talk to them and ask them questions. They’re really welcoming, which made it easy to transition into Oberlin tennis and their way of doing things. If you weren’t sure of anything, you weren’t going to get busted on by your teammates. I could get better at tennis because I didn’t have to worry about anything else.

The team had a pretty successful season last year. How did that influence your decision to come to Oberlin?

MM: I’m from about 45 minutes away, so I practiced with a lot of the guys on the team before coming here. Knowing [Coach] Eric [Ishida] for a few years before coming here made it really easy for me to make the decision to come to Oberlin.

MD: Definitely seeing a program that is on the rise rather than the decline is a huge incentive to join that team. I really liked Eric, and I thought that he had a demeanor that would work well with the way I learned and improved my tennis game in the past. I thought it was a good fit for me.

RG: It was a big incentive push. Eric would always say, ‘Look how much better we’re doing this season.’ It wasn’t a factor in my decision, I think, but I really like this school, the team and Eric. Those were the biggest factors.

What were the most exciting moments of your first semester on campus, both tennis and non-tennis related?

RG: We beat Walsh College — that was pretty cool. We played this really close match with this team that thought they were much better than we were, and won the last match against the coach’s son. It was pretty sweet.

You have a pretty young team. What advantages and disadvantages does that present?

MM: The advantage is that we’ll have this core of players for the next couple years, so we’ll all continue improving together. The disadvantage is the inexperience that we have. Mostly speaking for myself, being inexperienced, I haven’t played a lot of meaningful matches. We have a couple people on the team who have played a lot of meaningful matches and know how to compete, but some of the younger guys are still learning.

MD: We have a lot of potential for growth. We can have long term goals. Obviously the disadvantage is that we’re young and that we haven’t played college tennis before. Most of the successful teams in D-III tennis are teams that have been together a lot. It’s obviously a setback, but we have good junior and senior leadership for now.

RG: We talk a lot about who’s going to be the captain next year, but right now we’re pretty thin at the top. Right now, we have sophomores trying to claim leadership, but it’s cool. It’s friendly.

Tell me about your Winter Term trip to Australia.

MM: Time of my life. Amazing. I really enjoyed spending two entire weeks with my teammates and getting closer to them and really getting to know a lot of my teammates better on a personal level. Never a dull moment.

MD: The trip was really cool. I think one of the best results of that was having better team unity and getting to know our teammates outside of Oberlin and in the real world. We were doing real things with people we don’t normally do that with. I think it will translate to a better team in the spring.