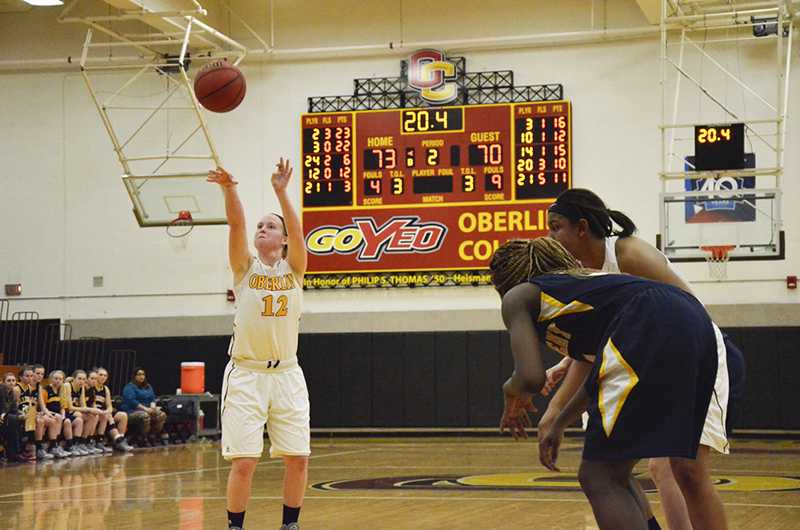 Junior guard Caroline Hamilton takes a crucial free throw late in the second half against the visiting Allegheny College Gators. Hamilton contributed 14 points off the bench, and the Yeowomen won 75–72.

Marquette and Bernhardt combined for 34 points in the victory, which included a combined 6–11 from three-point territory. Marquette closed the game one rebound shy of a double-double, while Bernhardt chipped in four assists. The Yeowomen dominated the majority of the game, never trailing after Marquette tied the game at two with a jumper at the 18:37 mark.

The Yeowomen closed the half with a comfortable 22–14 lead and increased their lead to as high as 11 on a jumper by first-year Anna Moore with just over 13 minutes left in the game.

With a double-digit cushion and just over five minutes to play, the Yeowomen appeared to have the game wrapped up, but the Big Red refused to go down easily and responded with a 10–0 run over the next 2 minutes and 50 seconds to tie the game at 43.

A layup by Bernhardt with a little over a minute left put the Yeowomen up 47–45, but a Denison jumper with 20 seconds left in regulation tied the game at 47–47 and sent it into overtime.

The Yeowomen jumped out to a quick lead in the extra period with back-to-back three-pointers by Marquette and Bernhardt. Marquette added a layup on the team’s next possession to give the team an eight-point lead it wouldn’t relinquish. The junior scored nine of her fifteen total points in overtime to help put the Yeowomen over the top. Denison cut the lead to four at 55–51 with just under a minute to play, but the Yeowomen defense played tough, preventing another late Big Red rally.

Junior guard Caroline Hamilton led all bench scorers with nine points and blocked a shot in the last minute to help seal the Oberlin victory. After the game, she said that the win was made possible by the Yeowomen’s resilience and ability to combat Denison’s late charges.

“The key to our Denison win was that we were really able to answer any run that Denison made,” she said. “Their last run was at the end of the game to tie it up and force overtime, but going into overtime we kept our heads together and didn’t panic. We stayed strong, and Lindsey and Christina came out and hit two huge threes in a row. Our resilience and belief in what we were doing really allowed us to get that win.”

Assistant Coach Casi Donelan also attributed the overtime victory to the team’s ability to remain focused and convert points down the stretch.

“Our plan was to keep executing the way we were,” she said. “Keep attacking them offensively and limiting their three-point looks and easy baskets around the rim. We told the girls, ‘Keep chopping wood, stick to the game plan and finish every play.’”

Head Coach Kerry Jenkins described Wednesday’s game against the Allegheny College Gators as being less about the visiting Gators and having everything to do with the Yeowomen.

“Our plan is to do what we do well. Our game plan is to play our game,” he said.

As has been the case all season, Bernhardt and Marquette were a big part of that game plan, helping the Yeowomen to a narrow 75–72 win. The two combined for 45 points and 10 assists, including 24 points and only two turnovers in the second half, before Hamilton iced the game with five key free throws late in the game.

The win pushed the team’s season record to 13–9 and its conference record to 9–4, setting a new school record for NCAC wins and breaking the previous high of eight set during the 1998-99 season.

“The way we have been playing has made us successful. Therefore, enhancing our game execution will only make us a better team,” said sophomore guard Bri Santiago. “We know we can play with any team in the conference, but it’s a matter of executing with no mistakes for a full 40 minutes. Our ultimate team goal is to have a home playoff game.”

The Yeowomen will look to push their win streak to three when they take on the Hiram College Terriers at home this Saturday at 1 p.m.