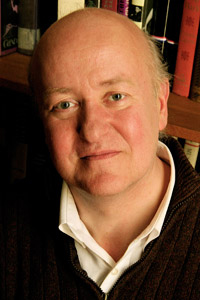 Pulitzer Prize–winning music critic and editor Tim Page, the visiting scholar-in-residence for the spring semester, is teaching the Advanced Music Criticism class for both College and Conservatory students this semester. His musical background propelled him into a fruitful journalism career, writing for publications including The New York Times, The New Yorker and The Washington Post. Page sat down with the Review Wednesday afternoon to discuss his move to Oberlin, Bob Dylan and retro New York.

What about Oberlin are you most excited to experience?

I’m excited to be working with some of the people that I’ve worked with before, and I just love teaching the art of criticism, which doesn’t have to be negative criticism. I showed [my students] a movie last week which was meant to give them some sense of the difficulties of starting off, and that’s basically it. It’s a school with a great history, and I’m near Cleveland — a place I’ve lived on and off over the years, especially when I was working on a book by Dawn Powell. So it’s a great place to spend the winter! Another reason I really like being here is that the students here are incredibly smart and original, and they all just seem to be… You know, I guess everyone is one of a kind, but I just get that sense here. Everybody is just so interesting and heading off in their own directions.

What inspired you to get into the field of writing about music?

Well, from when I was a little kid, if my mom gave me a new record or something which would get me all excited, and especially if it was something unusual, I would try to figure out what I thought of it. And sometimes I found that writing would help me figure out what I thought of it. From when I was really a little kid I would go up to my dad’s typewriter and just start writing. I did this with film, too, and a few other things, but then I got into music for a long time. I was studying to be a composer at Mannes College The New School for Music, and I was a pretty good pianist. I wanted to be a composer, and then all of a sudden I decided I wanted to be a writer, so I transferred to Columbia to study writing for two years. And then I remember one of my old professors said, “Choose one or the other! You can’t do both music and writing.” And I wasn’t trying to prove him wrong or anything, but just as I was about to graduate I started submitting articles to various papers, and by the age of 27 I was the junior critic at The New York Times, which was a big deal.

What has been your most exciting moment with music writing throughout your career thus far?

It was exciting when I got the Pulitzer Prize for music criticism in 1997. That was exciting. Giving you other concert ideas, it’s kind of hard to say, because I saw so many events and then [wrote] about them and [ forgot] about them, especially when I’d been doing it 10, 15 years. … But you know, I’ve heard almost all of the great conductors and the great pianists and great violinists, and I guess one thing that would make me excited was when I would find someone that was brand-new, and I’d hear a concert, and I’d be able to write something wonderful about that musician. There was a wonderful violinist named Maria Bachmann. … She played with the Lark Quartet for a period of time, and she has a group called Trio Solisti, and she commissioned a violin sonata from Philip Glass. That was fun because I did a lot of radio work and I presented a lot of radio premieres over the years, and that was a lot of fun.

Would you say being in New York was an inspiration to you?

At the time. I was very lucky to live in New York at the time I lived there. I was there for about 24 years, and it was a very wild and interesting time in New York. Downtown was suddenly booming. You had these great new wave rock bands, you had really unusual jazz, you had Einstein on the Beach [an opera by Philip Glass], these things going [on], and that was fun to be a part of. I was young and, you know, it was dangerous, but it was really cheap. I remember friends who had apartments for $75 a month — try staying in the tri-state or anywhere near New York for $75 a night! But it was pretty dangerous. I was lucky nothing really happened to me. I got to know a whole lot of interesting people, and I loved it. By the time I left I was almost 45, and I had been living in Washington, D.C. [because I was at The Washington Post]. … What happened was, New York has diminishing returns. When you’re young and you’re thrilled by it, you think it’s so cool, especially coming from a tiny town like I did. But I’d also, by that point, lived in Cleveland for a summer, I’d lived in Washington and in St. Louis, and I started to like smaller cities better.

Now that you’re not writing, is there anything you’ve been working on besides teaching?

I just collected the newspaper music criticism of a man named Virgil Thomson and, you know, it’s 1,200 pages, so it’s a big collection, and I’ve been working on that for a while. And I’m working on a few other things, but I probably shouldn’t say too much about them or I’ll jinx them.

What’s the thing that people don’t know you like to listen to or write about?

Well, I guess some people would be surprised that I listen to a lot of rock. A lot of the stuff from my era and some of the newer groups, too. But things have changed since I was a music student. Back then, I mean, I guess it was OK if you admitted you liked the Beatles, but people would look at you really strangely if you said that you were really interested in Brian Wilson or Bob Dylan or one of those guys at [that] point. … But, you know, I don’t think it’s that way anymore, because [even] if you’re not listening to all the music that’s around you … it’s there, [and you should listen to it even if you don’t like it, or] you’re going to be kind of an ostrich, and there’s a price to pay for that.

If there’s any advice you have for any budding writers, what would it be?

Well, I can tell you how to be a good writer. Read your work aloud. Read it to your friends if they’ll listen, read it to your folks or your siblings or your mate if they’ll listen. But read it aloud, and read it seriously. Read it as if you were telling a story or giving a speech or reciting a poem. All sorts of things will become clear about your writing — when you’re using boring sentences, when you’re repeating words, when you do anything like that. And the more you read your work aloud, the faster you become a really terrific writer. I would also say — and I always tell this to my class and they don’t believe me at the start — that I can actually tell when they’re reading out loud because their stuff just goes, “Woo!” Just like that. It’s the great secret of how to write.