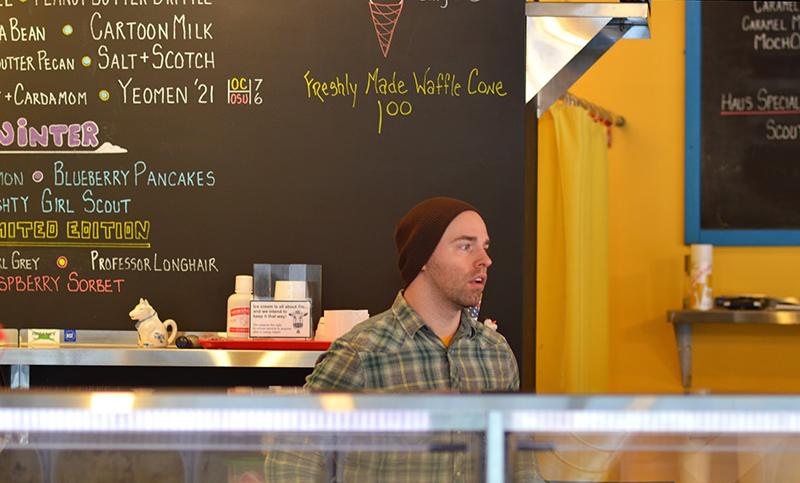 Cowhaus Creamery employee Eddy Marflak stares out the window of the empty store. According to the owner, Cowhaus has experienced a decrease in revenue after losing parking spaces during the Gateway Project construction and may have to shut its doors.

Due to a significant decrease in revenue, Cowhaus Creamery has been forced to consider closing its store. The owners point to the lack of parking caused by the nearby construction of the Peter B. Lewis Gateway Center at the corner of College Street and Main Street as a major reason for this drop in profit.

Josef Bomback, OC ’76 and the coowner of Cowhaus, said the store has experienced a 30 percent decrease in revenue compared to the previous three years they have been in business. He said this drop in revenue directly coincides with the beginning of the Oberlin Inn construction and the removal of parking spaces located outside of the building.

“We were under the assumption that when this building was starting construction, and when those places were taken away, there were 17 places that would be removed, and the parking lot where the trailers are would be removed,” said Bomback. “Anyone with half an ounce of sense in them would have temporary parking for retail. Without parking, you don’t have retail.”

Bomback said he was surprised by the decrease in on-street parking spots.

“You can have the best location in the world, but the deal-killer every time is no parking,” he said. “We were shocked when we found out that these places were going to be permanently taken away.”

Bomback said the disappearance of parking spots is due to the city’s lack of strong management and foresight. The College owns the lot and all of the parking spaces in question.

“Those spaces are owned by Oberlin College; it’s provided for their facilities and the Oberlin Inn, and it’s [under] their total control about how many spaces they want to maintain,” said Fire Chief Dennis Kirin. “I don’t see where anyone else in the city, or the city itself, can come in and say you need to provide more parking.”

He says that all of the concerns of the East College Street Project should not be directed toward the city but instead toward the College. Kirin went on to say that his only role in the parking decision is to approve the safety of the College’s parking plan.

Bomback is also concerned with the safety of the lighting near his shop. He said the lighting is poor, which creates a hazard in the winter when the sun sets sooner in the day. According to Bomback, this deters families from coming during prime business hours if there is not any nearby parking and they must walk through the dark.

“[The lighting is] very limited, considering the amount of employees that are there,” said Bomback. “It is not [just] hard for customers, but employees too. A lot of them are students too, and they are driving from Elyria, Lorain [and] North Ridgeville, so it is really tough on everyone. I really feel bad, and I do not want our employees walking at 11:30 at night three or four blocks away to go get their car. It’s not safe.”

Even though the amount of street parking has been decreased, there are currently four on-street parking spots, in addition to the Eric Nord Way and the East College Project parking lots. Although it is ultimately the decision of the College, Kirin said that more spots will be created in the area.

Kirin said that throughout the East College Project construction, parking was always an issue. However he believes there is sufficient parking, especially when compared to the rest of the downtown area.

Bomback said that they are projecting revenue to be 20 to 25 percent lower this year compared to the past three years. As for the future of Cowhaus Creamery, he is unconcerned. Cowhaus is in the process of getting involved with wholesale marketing and will distribute ice cream to up to 150 stores throughout northern Ohio starting toward the end of this summer.

“Oberlin is stuck in the past,” Bomback said. “They said they are going forward, but they are stuck in the past. For this to be resolved, we’re out. But as an alumni this hurts me to even think like that … but we’ve been making some really strong and positive movement for this issue to be restored.”

He says he has several options, including moving locations, but he is still trying to keep the business in town.

“Right now, we are not going out of business,” said Bomback. “Right now, we are going to keep plugging and taking [it] month by month. … We personally enjoy having a flagship, and we consider East College our flagship. And we still do, until the numbers say we cannot anymore. We hope this is enough to sustain us until the parking comes in.”