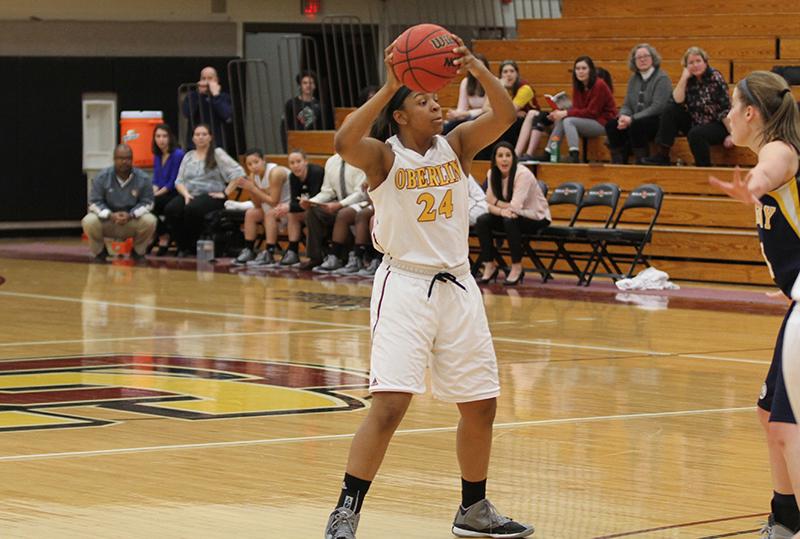 First-year guard Tyler Parlor looks to make a pass against the visiting Allegheny College Gators. Parlor notched her first career double-double with 13 points and 11 rebounds against Hiram College last Saturday. The Yeowomen are currently 10–5 in conference play and 14–10 overall.

The women’s basketball team added to its record-breaking season last Saturday when it came from behind to beat the visiting Hiram College Terriers 76–72 in overtime. The win pushed the team’s overall record to 14–9 and its North Coast Athletic Conference record to 10–4, making it their best NCAC record ever.

The Yeowomen began the game slowly, trailing by five at halftime, but they rode a 17-point second half by senior forward Christina Marquette to tie the game and eventually win in the extra period. As has often been the case this season, Marquette led the team in scoring; she contributed 33 points, also adding 13 rebounds, 5 steals and 3 assists in a full line. First-year Tyler Parlor also helped carry the team, notching her first career double-double with 13 points and 11 rebounds.

The team scored 41 total points in the second half after scoring only 22 in the first, an uptick Marquette attributed to playing at a faster pace.

“I think in the second half we started executing more offensively,” she said. “We were finding each other in transition and getting easier baskets than in the first half, where we were playing a little bit of a slower game and having to shoot contested shots.”

Trailing by two with just 18 seconds left to play, junior guard Caroline Hamilton was fouled on a shot attempt. Coolly, she stepped up to the line and nailed a pair of free throws to send the game to overtime.

Hamilton was fresh off hitting five crucial free throws late against the Allegheny College Gators last Wednesday. She said she loves being in those high-stakes moments late in games.

“Stepping to the free throw line in a big situation is where I want to be,” she said. “It’s something I have control over. Staying focused is just a matter of knowing free throws are something I practice and I’m prepared for the situation. When you’re prepared, no situation is too big or overwhelming.”

In overtime, the Yeowomen worked quickly to put the game out of the Gators’ reach as they jumped out to a quick five-point lead and never trailed.

The Yeowomen have played a number of close games this season, and Head Coach Kerry Jenkins felt the experience gained in those games helped the team in the second half and overtime against Hiram.

“We’ve had a couple of close games throughout the year, and down the stretch they made a couple of mistakes that put them in a hole, and we took advantage of those mistakes,” he said. “I think it was our experience earlier in the year that helped us eke out the victory.”

Since starting the season 4–6, the Yeowomen have gone 10–4, a stretch that has pushed them into third place in the NCAC.

Hamilton said the the turning point came to fruition after the Jan. 17 loss to Wittenberg. Since that point, the Yeowomen have won six of eight games, falling only to the nationally ranked DePauw University Tigers.

“Our success in the second half of the season isn’t a fluke,” Hamilton said. “After our game at Wittenberg, everybody on the team made a commitment that we were all in. We showed up the next day and got to work. Individual workouts, more film, extra effort at practice. We haven’t stopped since then and our success really shows what can happen when a team commits to a common goal and everyone is all in.”

Jenkins, on the other hand, attributed the success to changes made to the lineup at the beginning of conference play.

“We made some decisions as a coaching staff earlier in the year about how we were going to go about the out-of-conference [games],” he said. “We extended the lineups early in the season and let a lot of people play, and by the time we got to conference, we had a good idea about what everyone’s capability was. We changed the lineup after Christmas break and it just worked.”

The team has started three first-year players for the majority of the run, a move the coaching staff was able to make due to the selflessness of some of the veterans on the team.

“We had some upperclassmen take some non-starting roles willingly and enthusiastically, and I think that their willingness to sacrifice for the team made a huge difference for us,” he said.

One of those upperclassmen to take on a different role was Hamilton, who has come off the bench for the last 12 games. She had back-to-back 14-point games against Allegheny and Hiram and has played her best basketball off the bench, something Jenkins attributes to her playing style.

“Caroline is a rhythm player, and I think coming off the bench gave her a chance to evaluate the flow and intensity and the direction of the team,” he said. “Coming off the bench suits her perfectly. It allows her to be a primary scoring option and be a focal point of the offense.”

Now, with the playoffs just around the corner, the team is using the opportunity to send Marquette, the team’s lone senior, off on a positive note as extra motivation to finish strong.

“I think that a lot of what we’re doing is for her,” Jenkins said. “She’s had some trying times during her time here and things haven’t gone as well as we would have liked them to, but I think our players really embrace the idea of sending Christina out on a high note.”

Not only is Marquette the only senior, but she is also the team’s leader on and off the court and a positive example for the younger players on the team.

“Christina is the hardest worker,” Jenkins said. “She puts the most time into it. She plays hard, she’s a great teammate, she’s supportive, she’s teachable; [she’s] everything you could want. I think she’s been able to instill some of those values into the younger players and they’ve embraced it.”

“Christina has meant everything to our program. The numbers and the records reflect it, but more important [are] the examples she set as a leader for the classes below her.”

The team’s strong run hit a speed bump Wednesday night against the Ohio Wesleyan Battling Bishops as the Yeowomen fell in a nailbiter 68–66. Another double-double from Marquette wasn’t enough, as the team was unable to erase a nine-point second-half deficit.

The team will look to get back on track and end its regular season on a high note when it takes on Wittenberg in a revenge game this Saturday at home at 1 p.m.