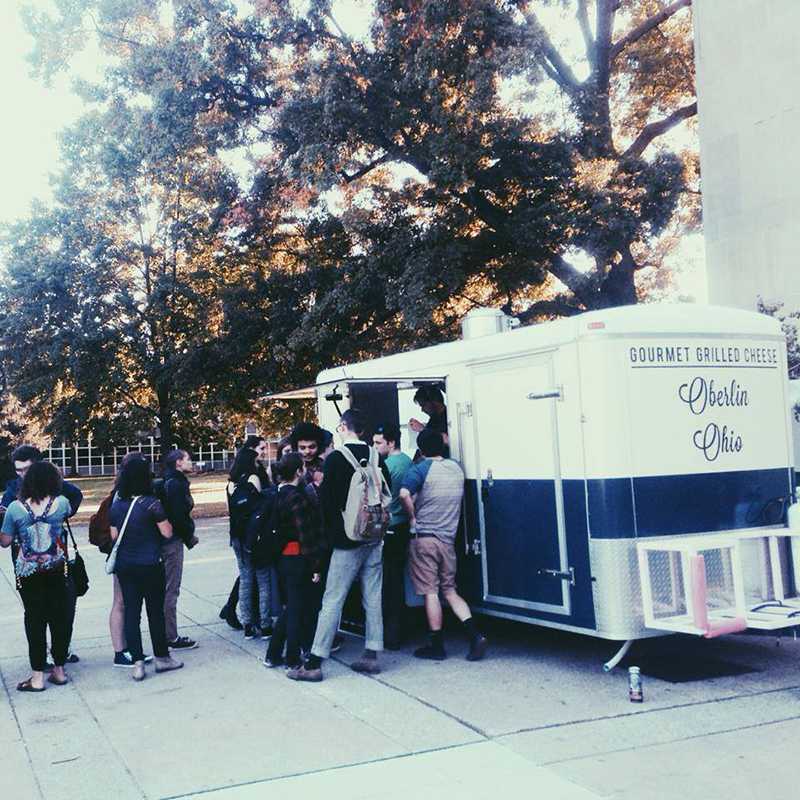 The North Coast Toast Truck serves food outside of Mudd library in the fall of 2013. Oberlin City Council is debating a new ordinance which would establish regulations to allow food trucks in Oberlin.

The City Council is currently refining a potential new ordinance that would allow food trucks to legally operate in Oberlin for the first time.

“The ordinance has to go through three readings by the City Council,” explained City Manager Eric Norenberg. “It’s already been through its first, and the last time it was tabled for discussion. The next time we’ll look at [it] will be March 2, where we’ll hear from the Planning Commission and the public and give more opportunities for editing.”

If the City Council passes the ordinance after its third reading on March 16, the new ordinance will go into effect on April 14, 30 days after it is passed.

Between now and then, the specifics of the ordinance will be refined to address some of the logistical and economic difficulties that some members of the City Council believe food trucks pose.

“From what I could see at the last City Council meeting, it’s just a matter of where these food trucks are going to be allowed to park,” said City Council member Sharon Pearson. “We also want to make sure we’re protecting the regular brick and mortar businesses.”

According to Norenberg, as of now the ordinance would prohibit food trucks from operating on Main Street and other high traffic areas. With this rule, the City Council seeks to prevent potential traffic and safety problems, as well as any economic detriment to local businesses. Instead, food trucks would be allowed on open public spaces, such as Tappan Square.

Through these regulations, Norenberg suggested that any detriment to local businesses would be limited. “There’s a way of marrying these two types of businesses without there being an adverse effect on the community,” he said. According to Norenberg, food trucks will be great for serving foods at special events in public places, while brick-and-mortar businesses can cater to their traditional customers without being affected.

“I will think this will be a great opportunity to get local, healthy food for Oberlin students, while also providing an opportunity for economic development,” added Pearson.

College senior Casey Silverstein is also enthusiastic about the impending food truck ordinance. After spending a summer renovating a food trailer, creating a business plan with College seniors Jeremy Reimnitz and Evan Zierk and raising $9,750 on Kickstarter to start a food truck, Silverstein and his friends hit a roadblock: The government of Oberlin wouldn’t allow them to sell food because of the lack of existing regulation and ordinances.

If the ordinance passes, business-savvy students with culinary passions could have a potentially lucrative new pastime.

“When I tried to launch North Coast Toast, a lot of students were invested in it. They wanted another late-night option besides Agave,” said Silverstein. “Because of the new ordinance, it’s definitely a possibility for students to open food trucks in the future. The groundwork has been laid now. Now that there are laws, you won’t have to go through City Council; you’ll just have to apply for a permit.”