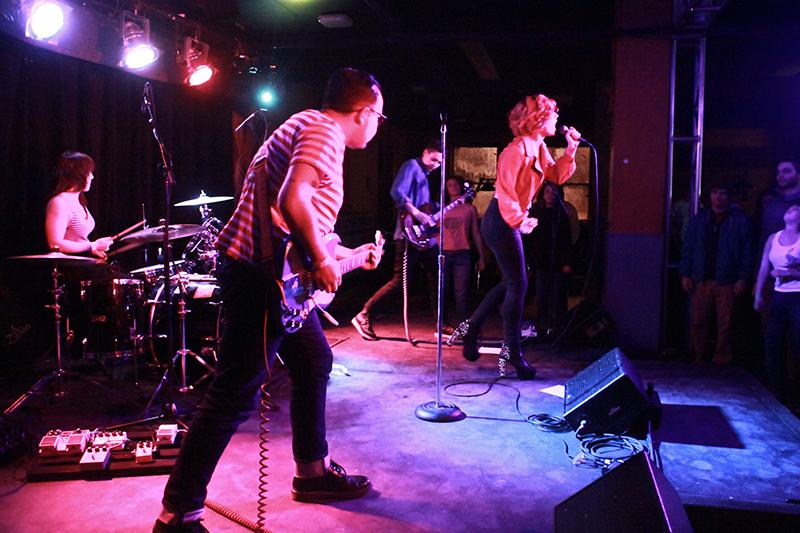 Priests rev it up with their Riot grrrl-influenced sound. The Washington, D.C. punks performed a handful of energetic cuts in addition to slow burners at the ’Sco on Monday.

Washington, D.C. punk outfit Priests’ set at the ’Sco on Monday was borderline spiritual, though the band isn’t religious. Their music is at times enraged, absurd and funny, but never overtly rarefied in a traditional sense. Still, Priests forged a transcendent experience for their audience the way any good punk band would. The audience didn’t simply perceive Priests’ music.

Instead, they took part in creating the night’s experience. People danced, moshed and moved as a unit. The band took an active role in controlling the show’s energy, creating a unifying space for their audience. Priests’ musical qualities were less essential to the experience of their concert than the atmosphere they constructed. Style, expertise and other musical elements are important for the shaping of any concert experience, though. Musically, Priests sounded similar to many Riot Grrrl bands. The band’s set met expectations, but did not exceed them. The musicians sounded like they knew what they were doing, but their style was not revolutionary. Still, the group gave a successful concert, and their musicality obviously had something to do with that.

At one point during the show, Priests played three or four fast, loud songs in a row, energizing the audience. For the durations of these songs, there were frenetic mosh pits. Attendees allowed the music to physically move them, not as a means of hurting one another, but as a means of coming together. These songs were musically tight and catchy, but the audience’s reaction to them left a bigger impression than the actual tracks. Igniting and guiding the energy of the room, the music was fundamental to this moment.

After the last fast song, frontwoman Katie Alice Greer said that they had played those songs together to give people a chance to “really dance,” and that now they were switching to something the audience could “slow dance to.” These remarks were telling in that they emphasized the importance of the flow of energy in the crowd; they hinted at the thoughtfulness that went into the shaping of the concert experience. Priests did not luck into creating a memorable audience experience but formed it intentionally — so intentionally, in fact, that the audience’s response to the music was foremost in Greer’s mind.

When I consider the show as firstly a social event and secondly a musical one, I see it as a great success. However, if I were to consider it on purely musical terms, choosing not to pay attention to the audience or the show as an event, it wasn’t particularly successful. I don’t enjoy the band on their musical merits alone. However, the show was well worth the cost of a ticket because Priests succeeded in crafting an enjoyable and emotionally fulfilling environment.