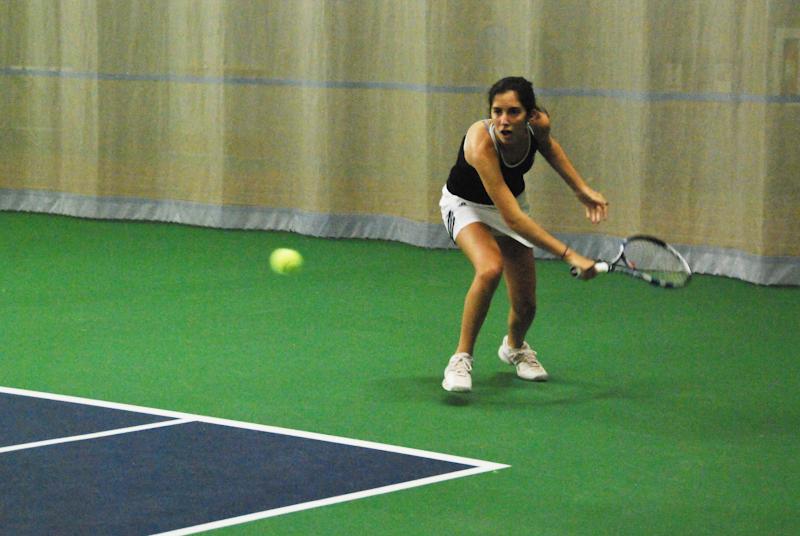 First-year Mayada Audeh returns a shot in her match against the visiting Ashland University Eagles on Wednesday. Audeh won both her matches in the No. 1 doubles and No. 2 singles slots to bring her total career wins to six.

The women’s tennis team bested the visiting Baldwin Wallace University Yellow Jackets with a clean 9–0 victory in its first set of matches last Saturday. First-year Mayada Audeh led the Yeowomen in the No. 1 singles spot, breezing past her opponent in two sets with twin scores of 6–1. However, Oberlin saw tougher competition in the Division II Indiana University of Pennsylvania Crimson Hawks later that day, losing in all but one match with a score of 8–1.

Sophomore Emma Brezel, who held the No. 1 doubles spot in Saturday’s contest against the Yellow Jackets, said that the team anticipated weaker competition from Baldwin Wallace, as the team is currently 0–5.

“Baldwin Wallace, historically, is one of the weakest teams that we play,” she said. “But my doubles match ended up being a lot harder than we expected, which is actually good because sometimes it’s nice to create pressure situations that you can’t create in practice.”

Brezel was joined by her teammate, junior Erin Johnson, in the top seed of the doubles matches to push past opponents Kelsey Blatt and Mackenzie Donalson 9–7. For Johnson’s top-notch performance in recent games, the North Coast Athletic Conference tabbed her as Player of the Week last week. She has tallied over 65 career wins for the Yeowomen.

Following up Brezel and Johnson were junior Ariana Abayomi and sophomore Anna Treidler in the No. 2 double spots. The duo quickly defeated the visiting Yellow Jackets in their match, finishing the game with a score of 8–2. Sophomore Olivia Hay and junior Alex Kahn held their challengers down at the No. 3 spot 8–0. In the singles competition, Brezel won her match in the No. 2 position and Hay followed suit in the No. 3 spot. Senior captain Grace Porter rested during the matches against the Yellow Jackets in preparation for her contest later in the day against the Crimson Hawks.

Porter’s morning off proved rewarding in her doubles match, where she was joined by first-year Sarah Hughes. The two Yeowomen tallied the sole victory against Indiana University of Pennsylvania, taking the game home 8–4. Porter said the hard-fought victory helped improve the team’s morale and that, overall, her team performed well against the talented competition.

“It was a good improvement because we have played against tough teams like that, that are ranked top 20 in the country,” Porter said. “We haven’t been able to hang with the matches quite as closely, but against this team everyone was competing really well. My doubles partner and I won, which gave us a lot of confidence for how our doubles season might look.”

Brezel compared the Crimson Hawk’s skill level to previous tough competition, like University of Chicago and Case Western University, nationally ranked at No. 12 and 23, respectively.

On Wednesday night, the Yeowomen hosted the Ashland University Eagles in the John W. Heisman Field House. Brezel led the way in the top singles flight, defeating Martina Baca in two sets, 6–1 and 6–2. Audeh and first-year Jackie McDermott also emerged victorious in the No. 1 doubles slot, winning 8–4. Overall, the Yeowomen had a convincing win with a final score of 8–1. Head Coach Constantine Ananiadis said that the victory demonstrates the progress his team has made since last season.

“Our doubles is continuing to get better every time we step on the court,” Ananiadis said via email. “Even without our number one doubles team out there, Grace [Porter] and Sarah [Hughes], we handily beat Ashland, which was good to see, as we’ve struggled against them in the past. In singles too, our freshmen are continuing to figure things out and add elements to their game, which will come in handy later in the season when we face some tougher tests.”

Looking forward, the Yeowomen will travel to Lima, Ohio to play the University of Northwestern Ohio this Saturday at 11 a.m.