In the Locker Room with Bronwen Schumacher and Kate Hanick 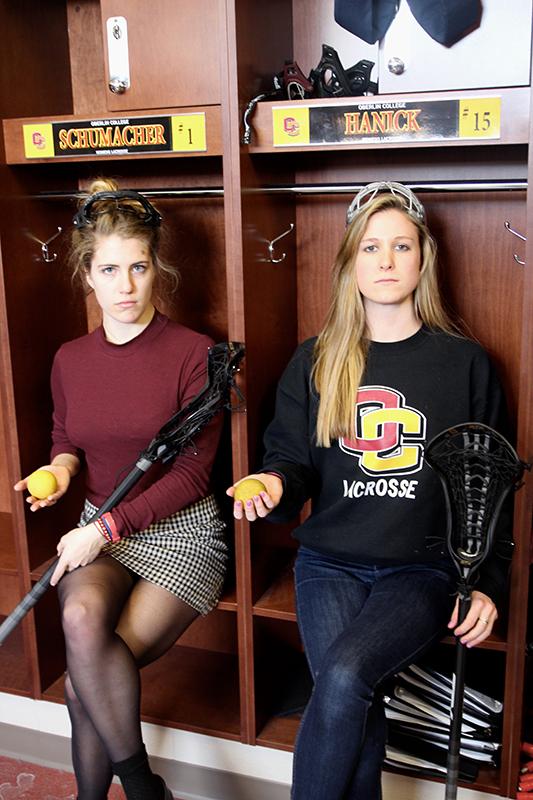 This week, the Review sat down with senior women’s lacrosse captains Bronwen Schumacher and Kate Hanick to discuss their leadership roles, team traditions and the weirdest things that have happened during their time on the team.

What are your expectations for the team this year?

Bronwen Schumacher: Win. It’s pretty well established that we are now where we were after spring break of last year, and with that power, I think that we can easily beat the people who we lost to last year: DePauw [University], grr. The confidence is there, and the composure is there. Our attack’s shots are much more precise, and we do a lot better under stress.

How has the team changed since you first got to Oberlin?

BS: I think that our team now is about lacrosse, whereas before it was more about the individual. Because of better recruitment, people come from similar lacrosse backgrounds. You can see that there is a level of understanding of lacrosse that people bring in from high school that wasn’t there when I came. When I came, there was actually a lack of a fundamental understanding of how to play the sport. There was good skill but no field sense.

KH: We are a more cohesive group, and we all really mesh well, and that’s a great thing.

Do you approach things differently as team captains?

BS: Kate’s captainship is field captain. It’s always been that way, even when she was a freshman. Everybody — senior, junior, sophomore — looked to Kate. I think that’s just solidified in her captain role. I think she has an intimidation factor that I don’t have. You want to impress Kate when you step on the field. People who don’t play sports here don’t understand what mental toughness means, especially physically. People just give up, and I don’t because I play lacrosse. You realize how good it feels to not give up, even if you lose.

KH: It kind of sucks having to be the responsible ones. I feel like we have to dictate the tone of each practice because I feel like if we are in a goofy mood, the whole team thinks it’s time to be goofy. Bronwen always has a very complete view of the field, and I feel like she articulates it in a really concise way to the team. She also is the spiritual leader of the team. When we are down in a game or lagging in practice, she always recognizes that and has something motivating to say. For all the injuries that I’ve had, I get this fight-or-flight instinct, but you just have to learn to power through it. That’s a huge thing for our team, dealing with losses or whatever comes our way.

Are there any team traditions that have been around your entire time at Oberlin?

BS: We have some secret traditions that always happen before the first home game, but we will not be exposing those.

KH: Every year, we have a stick that has been passed down every year to a younger player. It goes to a person that embodies that spirit and enthusiasm about the sport, no matter the adversity they face.

Injuries always seem to be an issue for your team. Why do you think that is?

BS: Williams [Field house]! Within one week of playing there, two of our athletes both had their shin splints return.

KH: It used to be a hockey rink, then they put some concrete in place of the ice, then they put a thin layer of turf over that, and they wonder why repeated running for a month and a half causes stress fractures. Everyone just kind of feels pain everywhere.

What about your time on the lacrosse team will help you after you graduate?

BS: To preface, we had a really tough coaching experience before Lynda McCandlish became our head coach. We learned how to deal with people who abuse power. Also, we learned [to be] able to manage a thing that you do for 25 to 30 to 40 hours a week, depending on the week, when a lot of people here don’t do anything besides school. That’s helped a tremendous amount with time management.

KH: All of the things that we’ve dealt with over the years, learning what it takes to have a really cohesive group of women and people in general, will help. [We’ve also learned] how to deal with really stressful and demeaning environments, how to depend on each other for support and how to find the right resources for that support.

What is the weirdest thing that happened during your time on the team?

BS: We have just created our first annual competition, the Lip-Sync Competition at the ’Sco. Kate sang “Midnight Train to Georgia” by Gladys Knight and the Pips, and she was wearing a velvet bodysuit with leopard-print bell-bottoms and a fur coat. She pranced around stage lip-syncing.

KH: Bronwen and I were doing a relay race and we were on separate teams up against each other. It was a sprint up and sprint back, and we get to the line at the same time, and then we turn around, and Bronwen is ahead of me. So I decided to pull her pinny really hard, but she was wearing a not-so-supportive sports bra that day, so her boob just popped out. The whole team was waiting at the finish line and she was completely exposed. Everybody was scarred. We’re also going to miss the old locker rooms and showering naked with the other teams.