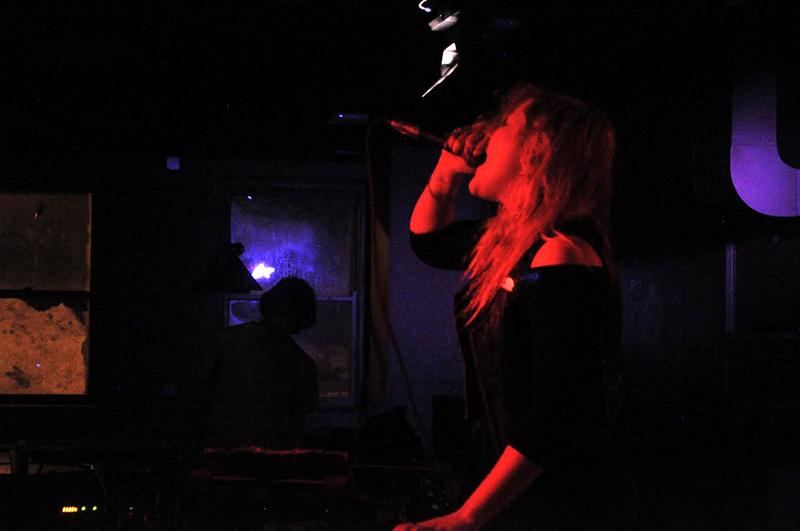 Pharmakon howls at an enchanted audience. She bridged the gap between music and performance art at the ’Sco Tuesday night.

Pharmakon, the experimental noise project of New York’s Margaret Chardiet, evoked visceral reactions in ’Sco-goers Wednesday night in a manner that even the heaviest of metal shows could not match. She fulfilled her self-proclaimed “deep-seated drive” to engage audiences in “uncomfortable, confrontational ways” in a painfully loud, performance art-tinged set.

Fans, critics and musicians alike tend to throw around words like “unusual” and “intense” when discussing power electronics, death industrial and related styles of underground noise music. Oftentimes, artists in these genres do little to differentiate themselves from similar acts, failing to live up to such adjectives. But Pharmakon crafted a legitimately unusual and intense set by incorporating both unnerving performative elements and cathartic musical content.

Performance art aspects aside, Pharmakon’s music itself played an important role in her transformation of the ’Sco into a bleak, almost ritualistic space. Pharmakon employed innovative methods of sound production; rather than relying on guitars or drums, she utilized everything from sampling machines to a piece of scrap metal. But her usage of unorthodox instrumentation did not hold her back in any sense. The sounds she generated, which included screeching feedback, primal rhythmic motives and atonal walls of sound, shook the ’Sco at least as well as a band working with a standard rock lineup could hope to. Her vocals, which were mostly ethereal, reverb-drenched chants or demonic shrieking, complemented the music expertly, and though her lyrics were often indecipherable, they were effective. The lyrics I could make out dealt with issues like hopelessness and anxiety — which Pharmakon has written about extensively since a near-death experience in 2013 — through surreal and sometimes disturbing imagery. The aural onslaught lasted for close to an hour, as Pharmakon, even when she left the stage to interact directly with attendees, never allowed the noise to dissipate entirely.

When Pharmakon did leave the stage, she connected with audience members in a subversive fashion. She circled around the ’Sco on all fours and clawed at attendees’ legs; she positioned herself inches from me and screamed directly into my face, as she did with many others in the crowd; she even wrapped her microphone cord around a baffled audience member. In general, Pharmakon displayed her interest in breaking down boundaries that separated her from the audience in a way that seemed more akin to a performance art piece than a traditional concert. Through her actions, she also made statements on gender relations in the context of noise music, which her website describes as “almost exclusively dominated by male performers.”

Her actions, directed at the primarily male crowd, confirmed this; she made it her central objective to own the space, establishing herself as a force to be reckoned with. From the way she stared threateningly into attendees’ eyes for extended periods to her authoritative body language, Pharmakon did everything she could to interrogate power dynamics, specifically those related to gender, throughout her set. She was successful in this pursuit: I found myself thinking about audience-performer relationships and noise scene politics in a new way as the show came to a close. I later discussed the performance with other attendees, many of whom identify as non-male, and they agreed that the concert challenged gender roles, the nature of performance and other societal conceptions.

Aaron Dilloway, who owns the Oberlin-based Hanson Records and performed for years with the seminal band Wolf Eyes, opened the show in a way that couldn’t have set the stage for Pharmakon any better. He offered an experimental set that highlighted dynamic contrasts. Like Pharmakon, he forged his music using a bizarre array of objects and instruments. Many of the most deafening sounds Dilloway created originated from an object on wheels that appeared to be covered in contact mics and were filtered through several layers of distortion. Dilloway produced twisted music in pairing this object with other noisemakers, moving it around with his foot while howling into a microphone and playing synthesizer. One aspect of Dilloway’s set that separated it from Pharmakon’s was the emphasis he placed on oppositions in volume and abrasiveness. Dilloway’s subtler textures acted as a foil to his and Pharmakon’s roaring noise. Quieter, more introspective moments contributed to the development of an eerie ambience that Pharmakon took full advantage of upon taking the stage.

Pharmakon delivered a thought-provoking set. Her music certainly did not — and never will — appeal to everyone, but for those interested in harsh and exploratory music, a Pharmakon show is an essential experience.