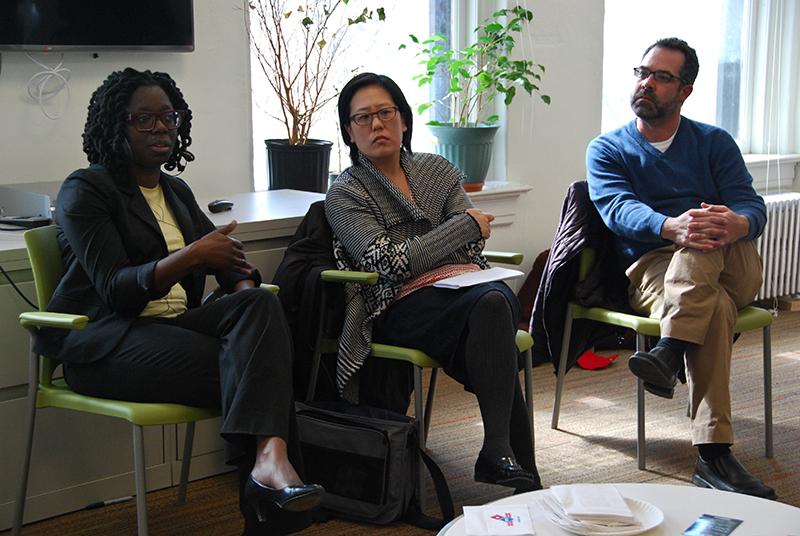 Associate Dean Pablo Mitchell and Professors of Comparative American Studies Afia Ofori-Mensa and Shelley Lee discuss the second anniversary of March 4, 2013 at an event sponsored by the Multicultural Resource Center on Thursday. Two years ago, the Oberlin administration canceled classes and held solidarity events in response to several anonymous racist messages posted online and around campus, as well as a reported sighting of a person in KKK regalia.

“The sit-in in the Science Center that preceded March 4, the all-night session in the African Heritage House, the teach-in led by the Africana Studies Department, the gathering of folks in the MRC to make posters and banners and to process what was happening, and following demonstration culminating in the convocation in Finney were all intense and moving,” said Alison Williams, director of the MRC and associate dean for academic diversity, in an email to the Review. “The most powerful part for me was the incredible amount of work put into the working groups by the students after March 4 and the resulting positive changes that came about as a result of their thoughtful efforts,” she added.

The discussion on Thursday focused on the events of March 4 and the series of racist incidents leading up to it, the experiences of people of color during the 2012–13 school year, the importance of student activism and how to most effectively critique and challenge Oberlin College as an institution. “One of the main themes that arose is that we all must realize that the struggle for justice, equity and inclusion is not a one-day event but a lifelong commitment,” Williams said. On Wednesday, the day of the anniversary itself, the MRC hosted a Google Hangout with former Africana Community Coordinator Caitlin O’Neill, OC ’11, former Graduate Resident Director Purvi Patel and Warren Harding, OC ’13.