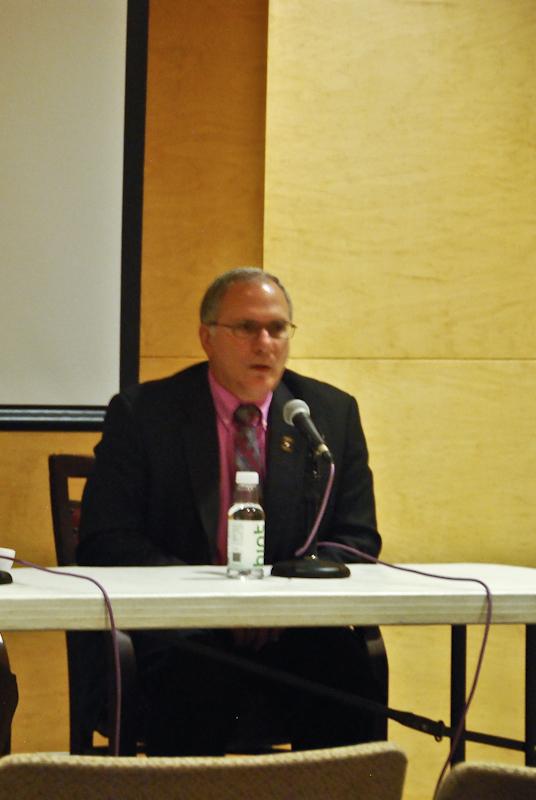 Professor Peter Mansoor is the current Raymond E. Mason, Jr. chair of military history at the Ohio State University. Mansoor served in the early years of the Iraq war as the commanding officer of the 1st Armored Division of the 1st Brigade, before later serving as the executive officer to General David Petraeus during the surge. He was invited by the Alexander Hamilton Society and the Oberlin College Republicans and Libertarians to take part in a discussion alongside Professor Zeinab Abul-Magd of the Oberlin History department about ISIS, the Islamic State in Iraq and Syria, a militant and radical Islamist group. Mansoor has appeared on CNN as a military analyst and has written two books about the Iraq War: Baghdad at Sunrise: A Brigade Commander’s War in Iraq and Surge: My Journey with General David Petraeus and the Remaking of the Iraq War. Petraeus, who was the director of the CIA from 2011 to 2012, recently pled guilty to sharing classified information with a journalist with whom he was having an affair; Mansoor declined to comment on the Petraeus plea deal.

The situation in Iraq and Syria got a lot of news coverage last fall and summer but hasn’t received as much coverage recently. For people who don’t know what’s been going on during the last few months, how has the situation on the ground evolved regarding ISIS?

Well, the U.S. air campaign has blunted ISIS’s advance and has turned the situation into one of strategic equilibrium, which is why there isn’t as much news coverage; if ISIS isn’t gaining ground, then there’s nothing quite as dramatic to report, except for the occasional horrific act of torture or murder that they commit seemingly on a regular basis.

But in fact, a lot of important things are happening in Iraq and Syria and in the region. In fact, just today, Iraq has begun a battle to regain Saddam Hussein’s home city of Tikrit, which has been held by ISIS since last summer. In addition to that, we’ve seen the Kurds retake Kobani, or at least hold Kobani, which was a significant defeat for ISIS in Syria. The Kurdish peshmerga retook Mosul Dam last fall, cutting ISIS’s supply lines to the city of Mosul, stemming from Syria.

How would you assess the way Obama administration has handled ISIS? What could it have done better or do better in the future?

The Obama administration has committed limited U.S. forces to fight ISIS. They really view it as a problem for the states in the region to handle with some U.S. support — air power and trainers. I think that the administration is underestimating the threat from ISIS and that in the end there is going to have to be more U.S. commitment to defeating the group to see this thing through to a successful conclusion. Specifically, we’re counting on Iraqi and Kurdish forces to fight ISIS on the ground, and we will find that they simply won’t be capable enough without more U.S. support — embedded advisors, foreign air controllers, maybe even some U.S. forces — fighting alongside them for specific missions in specific battles.

You said in an interview in August that you view ISIS as a “direct threat” to the U.S. Why do you think that’s true?

ISIS is the largest, most capable, best-armed and most financed terrorist group in the world today. It holds about a quarter to a third of Syria and Iraq. It has created a proto-state in the heart of the Middle East. It has ambitions to destabilize the region and seize a caliphate that stems throughout what they call Greater Syria or al-Sham or the Levant, which would include Iraq, Syria, Lebanon, Jordan, the Palestinian territories and Israel. Beyond that, it wants to seize caliphates [that] stretch across the Arab-Islamic world, which would include any place that had once been Islamic — Spain, for instance. From that base, it would attempt to dominate the world. It really has a millenarian vision of conquest in the name of Islam. It will not stop where it is, it cannot be deterred, and it will be highly destabilizing to the region — a region that is still of critical importance to the world’s economy because of the oil resources there.

And in the midst of that, it views the rival Shiite groups as apostates that need to be killed. So it would spark an intra-Islamic civil war; it already has, and that would rival the Thirty Years’ War in Europe in the 17th century for scale, scope and brutality. We can remember that the Thirty Years’ War killed off a third of the population of central Europe. So this is a group that would be highly destabilizing to the region and highly destabilizing to the world. If allowed to retain control of this state that it’s created, it would inject terrorism into Europe and the United States, either directly or via self-radicalized people who read ISIS’s postings on social media and take action. So no, it’s not a threat that we can ignore.

How has the rise of ISIS impacted your view of the Iraq War?

It really didn’t change my view at all. I think that during the surge in Iraq we succeeded in creating space and time for Iraqi politicians to move forward in a political manner, which they were doing. And then, simply put, we blew the endgame. We fumbled the elections of 2010 and backed a prime minister who was highly sectarian in his governing style. And then we withdrew our troops in 2011 and allowed him unrestricted authority to cause a huge sectarian rift, one that we had started to heal during the surge with the Awakening and the Sons of Iraq movements. And so by assuming that the war was over and that nothing that we did really mattered from that point on, we allowed al-Qaeda in Iraq, the predecessor group to ISIS, to resurrect itself across the border in Syria and plot its comeback.

Wasn’t a huge part of the surge supposed to be training the Iraqi military? What went wrong there?

Well, that was part of the surge. Nouri al-Maliki, the prime minister of Iraq, after we withdrew from the country, proceeded to fire all the Sunni commanders in the armed forces and a lot of the competent commanders who were apolitical and packed the leadership ranks with his political proponents. And what that did was it coup-proofed the armed forces. They weren’t going to launch a coup against him because they were all his guys, but they were also highly incompetent, and when ISIS attacked, they simply ran away, and then the troops aren’t going to fight for a commander they don’t respect and who isn’t there to fight with them, so the troops just surrendered.

In light of the rise of the Kurds as an effective military force and as strife between Sunnis and Shias in Iraq continues, what do you think about the future of Iraq as a nation-state? Was Vice President Biden right to propose a partition of the country along sectarian lines?

The question is: What would replace it? Those people who want to divide Iraq into three parts have to take ownership for the constant state of war that would exist among them. It’s much better to keep Iraq whole and then have regional provincial autonomy granted to various groups that would have a degree of local control over their own affairs. The Kurds effectively have that now; the Sunnis need it to bring them on board against ISIS. The Kurds obviously want an independent state, but they’re landlocked and wouldn’t be successful unless they have an agreement from the Turks to do it — to ship oil out through Turkey and move commerce to and from ports in Turkey. So Turkey really holds the key to Kurdish independence, and right now they would put a stiff arm to it because of the aspirations of the Kurds in Turkey to obviously become a part of the Kurdish state, should it exist. So I think right now the best the Kurds in the region can hope for is autonomy within the context of the Iraqi state.