In the Locker Room with Evan Holliday and Jason Freedman 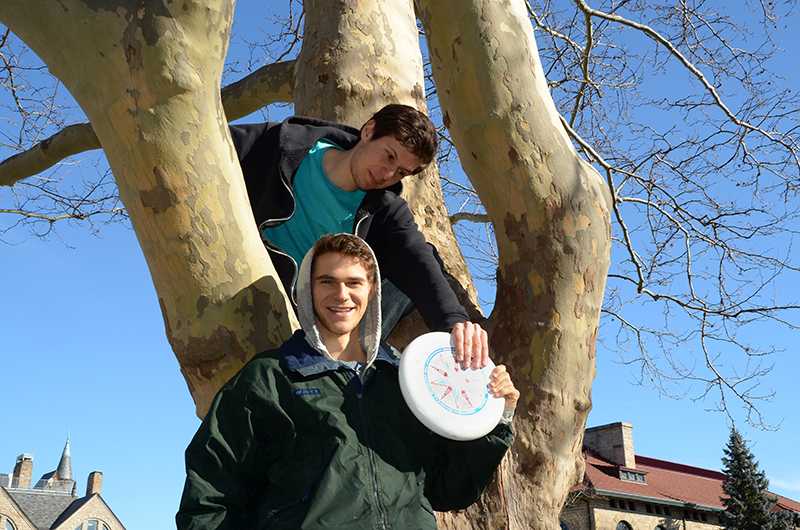 This week, the Review sat down with the men’s Ultimate Frisbee captains, senior Evan Holliday and junior Jason Freedman, to discuss changes in the team dynamic over the years, how they can make it to Nationals and their favorite team traditions.

Talk a little about the Horsecows’ relationship with the women’s Frisbee team.

Jason Freedman: The Horsecows and the Manti are very close, and we spend a lot of time together, including playing together but also partying a lot together. I would just like to clarify once and for all: They are different teams, and they play separately and have completely individualized practices and tournaments. A lot of people think they are one team.

Evan Holliday: The relationship with them has changed since I was a freshman. Over the past four years the teams have grown a lot closer and do a lot more together.

What does the team need to do this year to get over the hump and make it to Nationals?

JF: That’s a question that we have spent a lot of the past two years, and especially the last six months, trying to answer. This year, we’re really focusing on shaping our season the way that any varsity sport or high-level sport would. You have a preseason, and you work on building up strength for many weeks, and you save the highest load of your schedule for a concentrated set of about four weeks where you try and achieve your peak performance. Last year, we were a really good team, but we came into sectionals short on legs. We had a lot of injuries, and people were tired because we had overloaded the front end of our schedule.

How do you think the team dynamic has changed over the past few years?

JF: It’s huge. There are over 50 members on the Horsecows.

EH: When I was a freshman, it was a lot smaller, grittier, and we had a very scrappy, underdog attitude. Very few people had played Frisbee previously. Over the years, we’ve become a lot larger and a lot more experienced. Now, we know what’s up.

How has your relationship with the team changed since being elected captain?

JF: In large part, you get elected captain and it feels like a humongous change, and then after a couple weeks, it feels like not that much has changed. The biggest actual difference in my life is now I have to do way more stuff. I have to plan tournaments and decide what we do at practice, and it doesn’t really change what I do when I’m there because of the other leadership on the team, but there’s more that goes on behind the scenes.

EH: Stuff just kind of used to happen, but now we have to actually make that stuff happen.

How does this year’s first-year class look?

JF: They are good, and there’s at least 20 of them, as compared to last year when we graduated three seniors. There is a huge range in their capabilities. Some people have come in with a lot of Frisbee experience, and then we have tons of guys who are completely new to the sport, but maybe they played other sports in high school. Then some people aren’t really that athletic, and they haven’t played Frisbee before, but they have fun and work hard.

EH: The important thing about having so many people is that the team culture is such that the team can be anything for anyone. Whatever you want the team to be for you, it can be.

How excited is the team to start practicing outdoors?

JF: We started on Tuesday playing on the turf field under the lights. We want to let those discs fly.

EH: It’s been hard doing it inside in the Field House; it’s just really small. We have to play five-on-five instead of seven-on-seven, and there is a roof, which is kind of strange. It’s really nice to get back outside.

JF: Consistency of system. Within a year and year to year, the great teams have a system that’s in place. If the offense that they run with specific sets and specific goals is consistent, people know what to expect from each other on the field.

EH: Because Frisbee is a club sport, there’s not much of a budget for coaching, and it’s not that established. There’s not much infrastructure for it, and what we’re trying to do is build some sort of infrastructure. When we both graduate we want something to still be there.

Why do you think your team is able to foster positive team chemistry so effectively?

JF: In part, it is the nature of the sport. The culture of Ultimate Frisbee is very community-based, and you can observe that in pretty much any Ultimate team at any level. It tends to attract a lot of good people who are looking for a community to hang out with, and we just love each other.

EH: It’s just a lot of fun, and we really make an effort to bring people in. It’s not just a “Oh, who’s joining?” It’s more of a “Hey, we want you to join. Come hang out with us, and come play with us.”

How was playing Frisbee in high school different from playing at the collegiate level?

JF: I’ll answer this one because Evan didn’t play in high school. It’s definitely very different. I don’t think that it’s different than the transition in a different sport, but it’s definitely much more physical at the college level. Athleticism is much more at a premium, and it’s much more demanding.

What is your favorite team tradition?

JF: Spring break trip is a great tradition. Both teams go down to Georgia and stay in a house. It’s a fuckin’ blast. Simple as that.

EH: My favorite is at the end of a tournament we get in a circle and sing a song. It’s usually “Down to the River” or “Country Roads,” but we’re all mediocre singers, but it’s just a wonderful team moment and being one family. Doesn’t matter whether we win or lose.