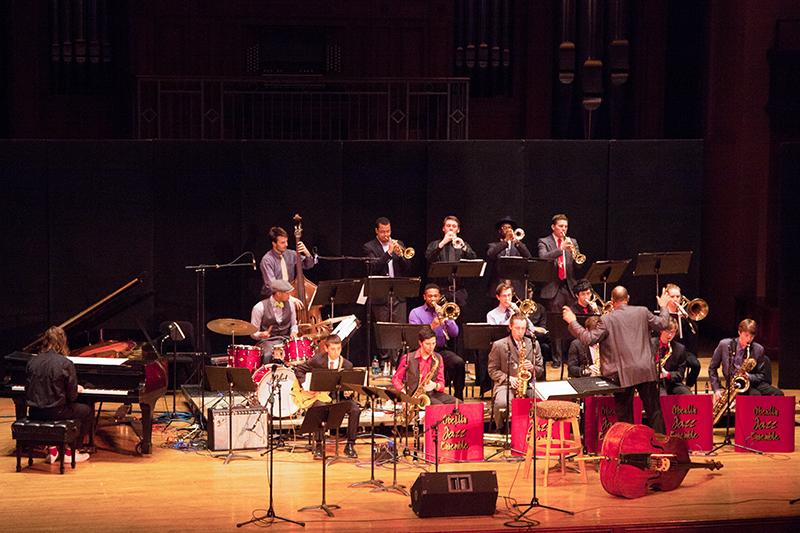 John Clayton must be a magician. There is no other way to explain the effortless precision with which the jazz icon played his mesmerizing bass solos at the Oberlin Jazz Ensemble concert last Friday evening. After being introduced to the audience at Finney Chapel by ensemble director Dennis Reynolds, Clayton — clad in a peach button-down and matching tie patterned with images of basses — appeared from behind a black blockade. With a genuine grin slapped across his face, he stepped through a band of dapper jazz students with his bass in tow, winking at pianist and Conservatory sophomore, Noah Sanderson. Clayton’s demeanor was gleeful and inspired a light-hearted atmosphere for everyone present, including the OJE musicians.

As expected, Clayton stole the show. Conservatory jazz aficionados seemed to rediscover their love of jazz, and even jazz newbies among the crowd were guaranteed to walk away with a greater understanding of the passion behind Oberlin’s uniquely spectacular jazz scene.

Before playing a note, Clayton introduced himself and the musicians on stage to the audience. The band sat awaiting its performance while sitting behind an array of old-school Oberlin Jazz Ensemble signs. Their first number, titled “Easy Money,” provided a jolt of energy that the musicians constantly renewed throughout the evening. The first soloist of the concert, trombonist and Conservatory junior Lawrence Galloway, appeared visibly excited to perform as he glided toward the microphone wearing a purple button-down shirt. After his energetic opening, double-degree sophomore and clarinetist Mel Maetzener delivered an equally stirring solo. The piece was driven by Conservatory sophomore and drummer Elena Conn, whose powerful playing helped maintain the piece’s intensity.

Following their debut song, a quartet of musicians performed “Locutus,” composed by double-degree fifth-year Nathan Swedlow, who won a Jazz departmental composition competition. Featured on Swedlow’s piece was professional pianist and “someone [ John Clayton] has known for their entire life” — Gerald Clayton, John Clayton’s son. With such a young face and hip attire, Gerald Clayton, sporting a gray suit jacket, a pair of cuffed pants and hip lace-up shoes, might have been mistaken for a run-ofthe-mill Oberlin student without his father’s introduction. Amid tunes by Dizzy Gillespie and Frank Loesser, Swedlow’s “Locutus” stood out as a gem of the evening. “Locutus” slowed the pace down to a smooth, comfortable speed and was simply beautiful. Playing along on bass toward the back of the stage, Swedlow’s face lit up as he observed Gerald Clayton’s skillful piano lines blend impressively well with indulgent saxophone sounds.

The band vaulted into a much more spritely mood with “Groove Shop,” written by John Clayton himself, which swung hard. By the look of John Clayton’s face, he was overtly enthused about the piece. Conservatory first-year Adlai Reinhart, who stepped up to the microphone for a trumpet solo, looked hesitant at first but belted a solid stream of notes during his shining moment. “Groove Shop” was the type of piece that would have inspired dancing in a more convenient location. At one point, John Clayton hopped repeatedly, expressing his excitement for the song. Near the end of the performance, Gerald Clayton launched into an unexpected piano solo, providing a satisfying respite from the hyper dynamics of the rest of the piece. John Clayton’s expression alone throughout his performance was enough to move audience members.

Before mellowing out in “Tale of the Fingers,” Clayton gracefully laid his sheet music over the stand as if he were laying down a tablecloth. After exchanging a sweet smile, the father-son duo began to play softly, yet intricately. Appearing enraptured by the experience of playing his instrument, John Clayton played effortlessly — literally with his eyes closed — as he snapped the strings of his bass. Watching Clayton play was a transcendent experience for both audience members and the student musicians who were fortunate enough to witness his performance close up.

The next selection, “Dusk Baby,” written by Gerald Clayton, included a sparse duet between the Claytons, showcasing their wonderful musical relationship. The twinkling of the piano keys felt light on the ear, like fog tickling water. John Clayton’s solo on the jazz standard “Con Alma,” by Dizzy Gillespie, showcased his ever-present spirit. The musicians onstage stared at him in disbelief, as did audience members, regardless of their familiarity with the Claytons or with jazz.

Overall, the concert was a success. The duration of the concert provided just enough musical variation in a satisfying length of time. The Claytons added sparks of excitement to an already impressive evening, though it might have been nice to see more student work, like Swedlow’s, and hear student solos featured. Hopefully Oberlin will see more performances like these in the near future, and the Claytons will bring magic to Finney again.