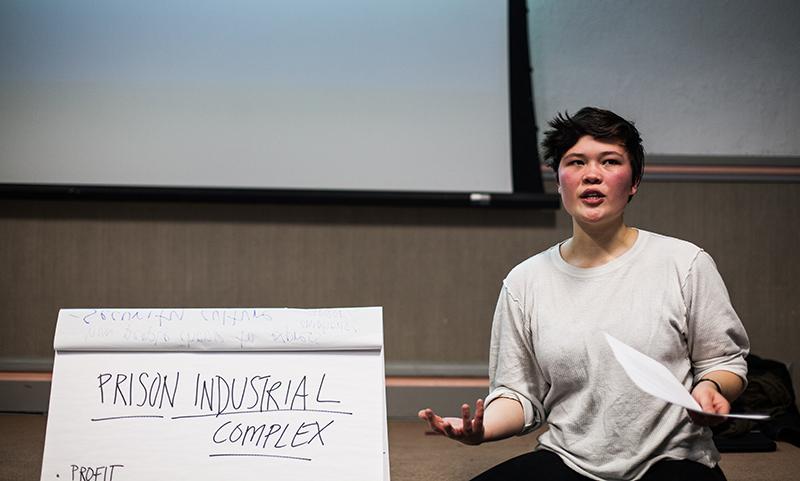 College senior Kaela Sanborn-Hum leads the Prison Justice Workshop on Saturday during the Weekend of Action. Led by the Student Labor Action Coalition, several campus groups collaborated to host the Weekend of Action, a space for workshops and discussions about economic justice.

The Student Labor Action Coalition collaborated with numerous student groups last Friday, Saturday and Sunday to host a Weekend of Action. Organizers put on more than 30 workshops pertaining to social justice, creative expression and technology over the three-day event in Wilder Hall, providing an opportunity for students to discuss and learn about economic justice.

College senior and SLAC member Dan Quigley said conversations about hosting the event were initially born from the negative responses to the financial aid policy changes made last spring.

“The idea of Weekend of Action was to have it be a power-building experience for students and the community,” Quigley said. “The idea would be that everybody who experiences this weekend, through planning or attending, would be able to construct cohesive feedback so we would know what was helpful and successful.”

According to Quigley, several individuals independently proposed the creation of the Weekend of Action in a SLAC meeting at the beginning of fall semester, but planning didn’t start until mid-February. After the group decided to pursue the idea, SLAC members reached out to individuals and campus organizations, as well as outside speakers. Quigley said they hoped students saw the weekend not as a SLAC event, but as “an event of students.”

The overarching theme of the weekend was economic justice; a range of groups, from OSlam to the Oberlin College Socialist Collective, hosted workshops and provided platforms for discussion. Zachery Crowell, College senior and SLAC co-chair, said this topic allowed for a diverse body of student groups and individuals to contribute to the event.

“We really tried to put the idea of economic justice in [the Weekend of Action],” Crowell said. “There hasn’t been as much emphasis on economic justice as other forms [of justice] here, especially coming out of one of the most expensive colleges in the United States.”

College first-year Emily Isaacson, who co-ran the J Street U Community Organizing 101 workshop, said she felt the workshop was successful despite the low turnout. Several community members, including Janet Garrett, who ran for Congress in 2014 and worked as a local kindergarten teacher at Eastwood Elementary School, attended the event. According to Isaacson, the Community Organizing 101 workshop was created around the dictum “turn what you have into what you need to get what you want.”

“One of the things you’re going to need is power,” Isaacson said. “[If] you have people, how do you organize those people into power? … An action has to be an event that leads to a larger goal. An action is a means to a larger end.”

Sanborn-Hum got involved in the Weekend of Action after Quigley and College senior and SLAC member Jackson Kusiak approached her about teaching a workshop. She decided to focus the workshop on the economic injustices regarding the prison industrial complex.

“Prison justice is deeply tied and connected to economic justice,” Sanborn-Hum said. “A lot of people talk about, or at least have heard about, the prison industrial complex, but do not necessarily know all of the ways that there are economics attached to it, institutionally and interpersonally.”

This workshop was one of three events that spoke directly about incarceration at the Weekend of Action.

While there currently aren’t any plans to host this event again, many participants expressed interest in another Weekend of Action, according to Quigley. Isaacson suggested a month-long series with different events taking place each weekend in order to increase attendance. Quigley hopes organizers can improve the event in future years by avoiding overlapping scheduling and gathering larger crowds from surrounding communities.

“I hope that other people take up the gauntlet next year and learn from all those mistakes and see what they can do to reach out to other colleges and communities,” Quigley said. “It definitely has potential to be much better than it was.”